(Minghui.org) Today's news from China includes incidents of persecution that took place in 15 cities or counties in 8 provinces, where at least 22 practitioners were recently persecuted for their belief. 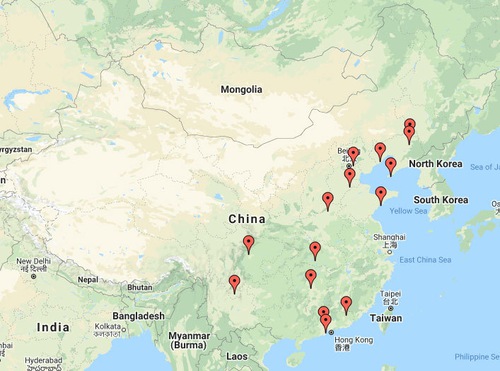 The trial against Ms. Jiang Deyuan is scheduled for October 20, 2021.

Her last hearing was on May 19, 2021. The president of the court, Yang Jilan, had to adjourn the hearing because prosecutors did not have any evidence. Her attorney was called by the court in June and told that the hearing would resume in July, but it was canceled later.

Ms. Han Chengli was arrested by agents from the 610 Office and clerks from the community on October 8, 2021. Her whereabouts are unknown.

Before arresting her, the agents and clerks repeatedly harassed her and tried to force her to sign documents renouncing Falun Gong. She refused and had to leave town for some time to avoid further persecution.

Ms. Zhao Zhongrong, 68, of Anda City, Heilongjiang Province, lives in Guangzhou City. She was arrested at home by officers from the Nansha District Police Department on June 8, 2021. Someone reported her when she distributed Falun Gong flyers in the neighborhood. Her home was ransacked. The case against her was submitted to the Nansha District Procuratorate on August 27, 2021.

On May 18, 2021, Ms. Li Xiaoming was arrested in her hair salon by Liu Huanyu, Liu Hongpeng, and others. She was detained for five days.

The cases against Ms. Zhang Guizhen and Ms. Yang Shufang were submitted to the Xianghe County Court. Both practitioners have hired defense attorneys.

Ms. Liao Xiaoping, in her 60s, was arrested by three officers from the Wuzhou Police Station around 9:00 a.m. on October 3, 2021. Her home was ransacked after 10:00 a.m. Police found nothing except several Falun Gong flyers.

She is being held in the Meijiang District Detention Center. She has been formally arrested.

Ms. Liang Shujie, 73, was arrested by officers from the Zhongshan District Domestic Security Division on August 26, 2021, after someone reported her when she talked to people about the persecution of Falun Gong. Officers from the Huanghailu Police Station ransacked her home. Her case was submitted to the Pulandian Procuratorate.

Mr. Yang Jinhan’s computer was returned by officer Liu Yang from the Zhangcun Township Police Station on September 23, 2021. The next morning, Liu Yang and two officers went to his home. They displayed documents from the police station and insisted that he go to the Hui County City Police Department and provide statements. They also seized his computer and several cell phones.

At the police station he had his blood drawn. He was taken to the basement and questioned by an officer. The officer asked about his phone calls and the Minghui report about Liu Yang persecuting practitioners. Liu asked that his name be removed from the report.

Liu took Mr. Yang back to the police station, where he was questioned until night, and then he was taken back to the Hui County People’s Hospital for blood tests and a physical exam. The blood sample might be recorded in the CCP’s organ transplant database.

Afterwards, Mr. Yang was taken to a detention center, where he was held till October 9, 2021.

Ms. Xu Zhiqiong was harassed at home by two officers from the Mengyang Police Station on the afternoon of September 30, 2021. The officers ordered her to sign a document renouncing Falun Gong, and tried to deceive her by claiming that her name would be “removed” from the police station’s blacklist if she signed.

Ms. Li Guirong was arrested by over 10 officers at around 9:00 a.m. on October 2, 2021 after someone reported her when she talked to people about the persecution of Falun Gong. She was taken to the Chengqu Police Station. When the station did not take her in, she was taken to the Dongguang County Domestic Security Division. She saw the young man who reported her and learned that he was an officer from the county Domestic Security Division.

She was released to her family after 12:00 p.m. Her electric bike was confiscated by the Domestic Security Division.

Ms. Chen Huilian was harassed at the end of September 2021. Two young women knocked on her door, but no one opened it. The called her daughter and asked for her phone number.

Mr. Zhou Guoshun and Mr. Gu Mingchong were ordered to talk to agents from the Sichuan Province Political and the Legal Affairs Affairs Committee on September 9 and 10, 2021. Mr. Zhou was ordered to meet in the community office. Eight people, including people from Domestic Security Division and community, as well as the village party secretary, demanded that he sign a guarantee statement to “not contact other practitioners”, “not be involved in any Falun Gong activities”, and “not practice Falun Gong.” He refused.

Mr. Gu, a disabled young man, was ordered to sign a similar document. He did not comply.

Ms. Gong Shurong was harassed at home by over ten people on August 23, 2021. They were from the community office, police station, Domestic Security Division, and 610 Office. Wang Liang, deputy secretary of the Kaiyuan Political and Legal Affairs Committee, and the director of the 610 Office, led the group. They ransacked Ms. Gong’s home illegally and seized her Falun Gong books. She was not taken away because she was sick. She received harassing phone calls on October 6 from officers from the police station and clerks from the community.

Mr. Liu Chenjin and his wife, Ms. Shi Yueying, were arrested on June 25, 2021. Ms. Shi was released the next day. Mr. Liu has since been detained. He was detained for several days somewhere in Laoshan District, and then in the Chengyang Detention Center. He was finally transferred to the Qingdao No. 1 Detention Center around the end of July.

Agents from the Shetianqiao Political and Legal Affairs Committee tried to take Ms. Li Feiyan to a brainwashing center on October 7, 2021. They also threatened her mother.

Ms. Wang Jiemei from Fushun City was arrested by officers from the Gaokan Police Station, Shenyang City, on February 21, 2021, when she was shopping in the open market in the old railway station in Shenyang. She has since been detained in the Shenyang No.1 Detention Center. A virtual court trial is scheduled for 9:00 a.m. on October 11, 2021.

“Man Beaten to Disability by Police Years Ago, Faces Prosecution Again for His Faith”