(Minghui.org) Today's news from China includes incidents of persecution that took place in 11 cities or counties in 7 provinces, where at least 14 practitioners were recently persecuted for their belief. 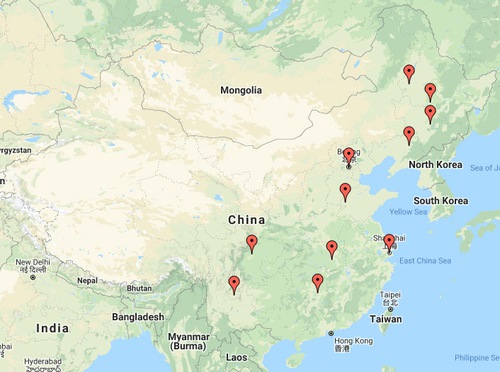 Ms. Bao Guiqin, her daughter Ms. Zhuang Ziyi, and her son-in-law Mr. Feng Hao from the Fularji District were arrested by officers from the Hongbaoshi Police Station in 2020. They have been held in custody.

After the three practitioners’ arrest, Ms. Bao’s husband had no one to take care of him, and his condition worsened. He was found dead in a puddle on the side of the road in Meilisi District on September 1, 2021.

Ms. Wang Shulan and her husband from Fang District were arrested by officers from the Harbin Railway Public Security Division and officers who were brought from various railway police stations on September 11, 2019. The couple were held in the Harbin No. 2 Detention Center.

It was recently reported that Ms. Wang was sentenced to three years in prison. She was taken to the Heilongjiang Province Women’s Prison in November 2020. She is being held in the No. 8 Ward of the prison.

Ms. Xu Chunfeng was arrested at home by officers from the Guangming Police Station and staff members from the Meiguicheng Community Management Office in the Wanghua District on September 26, 2021.

On the evening of September 26, when Ms. Xu’s family members went to the police station to demand her release, they were not allowed to enter. Ms. Xu was taken to the Fushun Detention Center the following day for 15 days of detention.

Ms. Zhang Meirong was detained for 15 days. On September 22, 2021 her family drove from the Qiaokou District to pick her up. On the way there they were phoned and told that they could not pick her up—instead she was to be taken to a “Law Education Class” (a brainwashing center). Ms. Zhang was taken to the Etouwan Brainwashing Center.

In early September 2021, community management office personnel of the Liuyuan Sub-district in Dongchangfu District called and harassed Du (first name and gender unknown), saying that they wanted to investigate the family’s spiritual beliefs across five generations. Du refused to cooperate. Community personnel went to the kindergarten run by Du’s son to intimidate him and his wife. They threatened that Du’s lack of cooperation would adversely impact the operation of the kindergarten and adversely impact their children.

On September 16, community management office personnel of the Liuyuan Sub-district called and harassed Zhou (first name and gender unknown), saying that they would go to Zhou’s home for a visit, which Zhou refused.

Mr. Peng Junnan, 78, a retired teacher, was notified by a staff member from the Shigu District Procuratorate on September 26, 2021, that they had started prosecuting his case. The staff member pressured Mr. Peng to sign paperwork, which he refused. They later found Mr. Peng’s daughter and pressured her to sign the paperwork. Officer Ouyang videotaped her signing it.

Mr. Meng Hualong from Yantangba Community, Jingyang District, was arrested and his home was ransacked on September 27, 2021. The officers photographed him, pressured his family to sign paperwork, and confiscated 15,000 yuan in paper bills with Falun Gong facts printed on them.

Ms. Tan from Xiantao City, Hubei Province, works in Shanghai. Recently her family and friends lost contact with her. We request anyone who has information about her to provide more details.

Mr. Zhang Zhengsheng from Wangcheng Village was helping others pick pomegranates in the fields on a mountain ridge on September 11, 2021. Village Party secretary Shuai Lianhong, village deputy Party secretary Zhang Tianjun, and village women’s affairs director Wang Kexiu led three or four unknown people to go to the fields and look for him.

They pressured Mr. Zhang to sign his name on a sheet. He was illiterate, so they insisted that he fingerprint the sheet, which he did. Wang Kexiu then gave him 200 yuan.

Ms. Cheng Jingying, 69, from Miyun District, was reported to the police while talking to people about Falun Gong and distributing Falun Gong materials on February 9, 2020. She was arrested. The officers ransacked her home and confiscated all her Falun Gong books, a computer, and a printer, among other personal belongings.

She was released on bail on February 10. Around December 18, 2020, she was facing sentencing and left home. She has since remained displaced.