(Minghui.org) Practitioners in Keelung and New Taipei City held a group exercise at Maritime Plaza in the afternoon of October 17, introducing Falun Dafa to the public and raising awareness of the persecution in China. 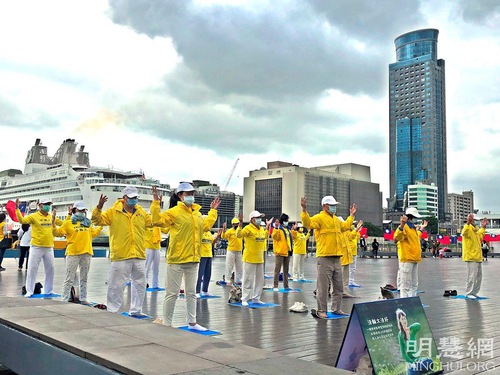 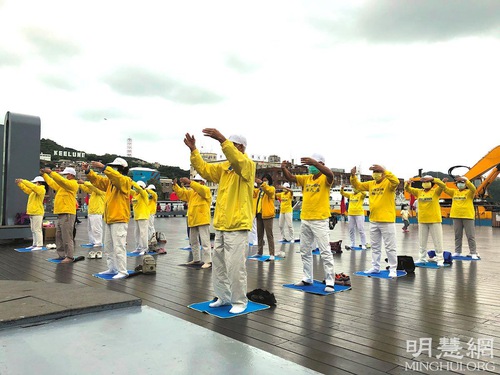 Falun Dafa practitioners doing the second set of exercises at the Keelung Plaza in Keelung on October 17, 2021

Located to the east of Taipei, Keelung is the second largest seaport of Taiwan. True to its nickname of Rainy Port, it was drizzling on the day of the event. But at the popular tourist site of Maritime Plaza, many people were impressed by the gentle exercises and stopped to watch.

One local resident said he had seen Falun Dafa practitioners in numerous events over the years. “They were large activities and looked magnificent,” he added, “Unfortunately, I have not seen anything like that in the past two years due to pandemic.”

An Indonesian couple working in Taiwan said they knew there are Falun Dafa practitioners in their home country too. Upon hearing the brutal suppression in mainland China since July 1999, they praised practitioners’ perseverance in their faith and their courage in countering the totalitarian regime.

When one mother came by with two children who were playing on scooters, the children were very interested and began to mimic the practitioners’ exercise movements. In the end, both the mother and her children stayed to learn the exercises, and they liked them a lot.

Despite the rain, the event went smoothly. One practitioner who participated in the group exercise hoped more people could benefit from the practice and Falun Dafa’s principles of Truthfulness-Compassion-Forbearance.