The activity was held two days after a month-long state of emergency was lifted in Aichi Prefecture on October 1. People could finally relax and walk through the city streets. The sun was shining on October 3, and many pedestrians passed by the practitioners’ event.

Practitioners performed the Dafa exercises near the fountain in Nagoya’s most prosperous area, Sakae. They gave informational materials to passing pedestrians and collected signatures. Practitioners put up banners in Chinese, English, and Japanese that read “Falun Dafa is good,” “Truthfulness-Compassion-Forbearance,” “Falun Dafa practiced around the world,” “SOS - Stop the Persecution of Falun Gong” and “Stop CCP from killing practitioners for their organs.” 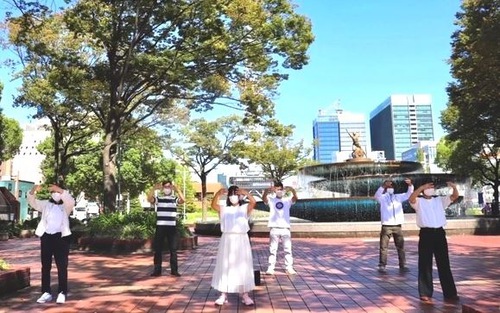 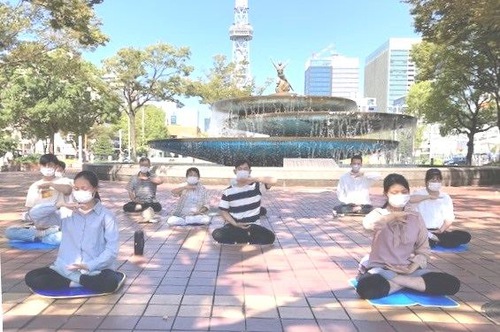 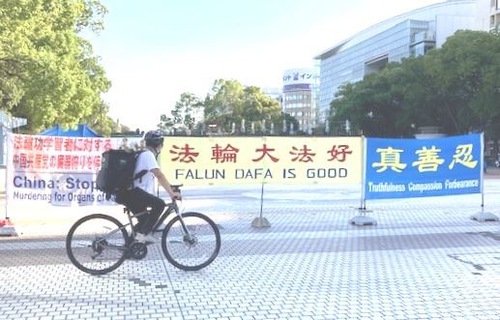 Two young Westerners passed by in the morning when practitioners were doing the second set of exercises. They watched practitioners, who were standing still in the wheel-holding postures, surrounded by the peaceful exercise music.

Petition Calls for an End to the Persecution 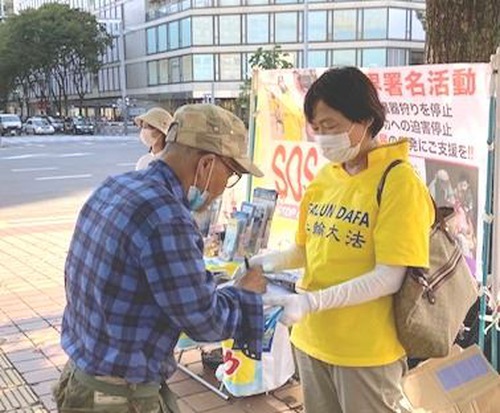 People sign a petition that calls for an end to the persecution of Falun Dafa in China.

Many pedestrians signed a petition that calls for an end to the persecution of Falun Dafa in China after they learned about it from practitioners. Mr. Mizuno, in his 70s, signed the petition that afternoon, then said to a practitioner, “I know the CCP can do anything. You people keep going!”

Mr. Urasaki, an elderly man from Okinawa, said that Okinawa and China historically kept close contact and displayed many similarities in living and eating habits. He had a good impression of China and didn’t expect the CCP to commit atrocities against its own people.

A practitioner told Mr. Urasaki that the CCP destroyed traditional Chinese culture after it seized power, and as a result, some Chinese people nowadays have lost their morality and dare to do anything for money. Over the past 20 years, the CCP has also persecuted Falun Dafa practitioners, who follow the principles of Truthfulness-Compassion-Forbearance, and it has even killed them for organs.

After hearing about these events, Mr. Urasaki signed his name on the petition. The practitioner gave him a paper lotus flower with the words “Falun Dafa is Good” and “Truthfulness, Compassion, Forbearance,” which he accepted and thanked the practitioner for.

Chinese people living in Japan also stopped by the event. Ms. Lu, a lady from China, talked to a practitioner for a long time. She accepted the informational materials, memorized the phrases “Falun Dafa is good” and “Truthfulness-Compassion-Forbearance is good,” and agreed with the importance of the principles of Truthfulness-Compassion-Forbearance. She said she knew about the CCP’s crimes and said that she would come back to learn more about Falun Dafa in the future.