(Minghui.org) The host of the 2021 Norrköping Cultural Festival in Sweden, which was held from September 24 to September 26, invited Falun Gong practitioners to introduce the teachings and demonstrate the exercises at the event. People at the festival agreed with the principles of the practice, Truthfulness, Compassion, and Forbearance, and many learned how to do the exercises.

A woman who had just learned the exercises could raise her once-injured arm over her head and called the practice, “Amazing!” 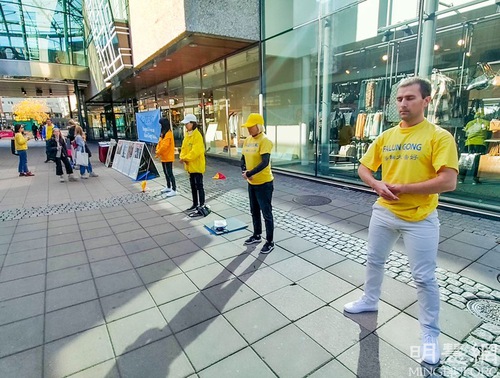 Falun Gong practitioners introduce the teachings and demonstrate the exercises.

Norrköping, which is in Östergötland County, is a major industrial city in Sweden. It is known for its textiles. The local government hosted the festival and introduced the participating groups on its social media before the event.

Many people came to learn about Falun Gong (also known as Falun Dafa) and the exercises. People signed the petition to condemn the ongoing persecution of Falun Gong in China once they understood the facts. 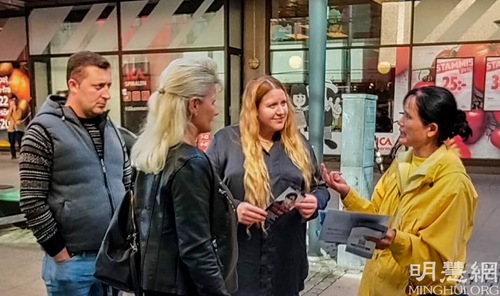 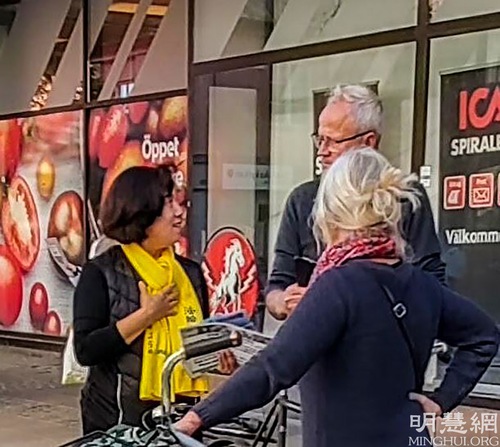 After festival participants learned the facts about the ongoing persecution of Falun Gong in China, they signed a petition calling on the Chinese regime to end it.

On the last day of the event, Erica, a local resident, came to the Falun Gong table. She seemed very excited as she raised her arm above her head and told a practitioner, “Look! I can move my arm and hold it above my head.” 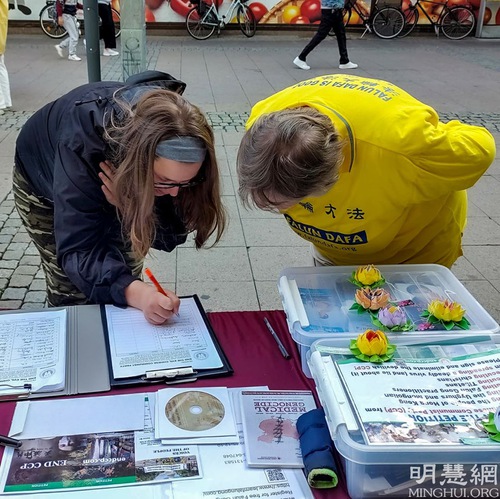 Erica (left) experienced the amazing healing power of the Falun Gong exercises. She signed the petition to end the 22-year-long persecution.

She had learned how to do the exercises at a local Falun Gong exercise site the day before. Erica injured her arm a long time ago and had limited range of motion—she couldn’t raise her arm. After she did the exercises, she was stunned: “I could move my arm again, I could even raise my arm above the head. This practice truly healed me, and I felt amazing. Falun Gong is indeed miraculous!”

Angelika, her husband, and a friend signed the petition to condemn the persecution and talked to the practitioners. The couple had been to China before and were aware of how bad the human rights situation is there.

Angelika said, “The Chinese Communist Party (CCP) carries out strict surveillance on its people. People there have to be extra careful, and wouldn’t dare to speak their minds, unlike us in a free society—we can say anything we want. Of course I support you when you tell everyone how evil the CCP is.”

Their friend had a big smile on his face. “I felt comfortable just standing here. I know that this practice is good. My mother is interested in qigong practices. I will let her know, and we will definitely learn this practice,” he said.

Educator: The Principles of Falun Gong Are Important for Everyone

A woman involved in education nodded her head as she listened to a practitioner introducing the practice. “The principles of Falun Gong, Truthfulness, Compassion, and Forbearance, are important to me and to everyone,” she said. She believes that everything is deteriorating in today’s society. The standards for good and bad are gone, and there seems to be nothing that people won’t do, which worried her.

A young mother with a paper lotus flower in her hands pointed at the words on the petals “The World Needs Truthfulness, Compassion, Forbearance” and told her daughter, “Did you hear that? I hope you will be a good child who tells the truth and you will be kind, compassionate, and tolerant.”

The CCP’s Crimes Are Unimaginable and Intolerable

A couple pushing their bikes stopped to read the poster about the CCP’s systemic harvesting of organs from living practitioners for organ transplants. After they read about what happened to the practitioners in China incarcerated for their faith, they signed the petition.

The couple had been to China twice and loved the beautiful country. They were amazed by its long history and enjoyed meeting its kind people. Knowing that the CCP killed living Falun Gong practitioners to profit from selling their organs shocked and angered them.

One of them said that the CCP’s crimes were unimaginable and intolerable, especially when the victims were law-abiding citizens. They wanted to help the practitioners by signing the petition. The husband took several fliers for his friends. He hoped to draw more attention to the issue of live organ harvesting.

You Are Doing the Right Thing and I Support You

A man from Iraq said that he’d been paying attention to the CCP’s crimes around the world. He showed the practitioners information on how the CCP has infiltrated other countries and a video on the CCP’s organ harvesting crimes. He took pictures of the posters to put on his social media to help spread the truth.

Practitioners’ peaceful ways to expose the CCP’s brutal persecution to the world impressed the man. He believed what the practitioners did was important and amazing. “You are doing the right thing. Keep on doing what you do. I support you,” he said.