(Minghui.org) Today's news from China includes incidents of persecution that took place in 18 cities or counties in 11 provinces, where at least 42 practitioners were recently persecuted for their belief. 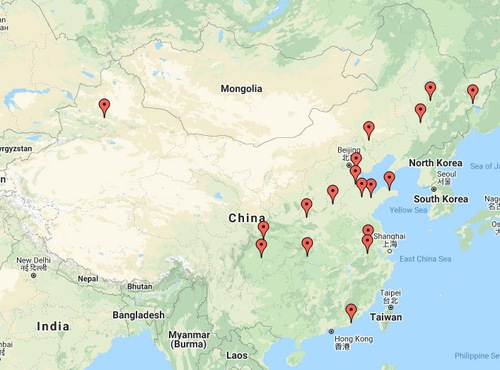 Ms. Yang Chengyun was arrested on November 25, 2020, by officers from the Pinghu District Domestic Security Division. Her home was ransacked. Her computer, printer, and truth-clarifying materials were taken away. She was released on bail on November 26, 2020.

Ms. Yang's nearby rented apartment was also raided. She learned on December 26, 2020, that she might be sent to a brainwashing center. Her current situation is unknown.

Ms. Xing Xiangfeng, 70, from Gaochun District was arrested on December 10, 2020, by several officers from the Chunxi Police Station in Gaochun District. Her home was ransacked. Some Dafa related materials were taken away. She refused to sign any documents in the police station and was released later that day.

Ms. Xing was harassed at home by the police on December 11 and 12, 2020. She was taken to the Chunxi Police Station again on December 13, 2020. After having her blood samples and fingerprints forcibly taken, she was taken to the Shifosi Detention House. Because of her high blood pressure over 200, the detention center refused to admit her and she was released around 10 p.m. that evening.

Ms. Cai Yuchang, nearly 70, from Longhu District was arrested at noon on December 12, 2020, by Hong Zhide from the Waisha Airport Police Station. She is currently detained in the Shantou Detention Center.

Ms. Xu Xiujie and her husband Mr. Mu Zhongchen from Luyuan District were arrested on December 16, 2020, by officers from the Puyang Street Police Station in the Luyuan District. The couple was interrogated in the police station until 11 p.m., then they were taken to the Weizigou Detention House. They were released the next morning.

Practitioners have been persecuted more severely in Jixianli Police Station, Beichen District in recent years. Ms. Wang Guiping was arrested for clarifying the truth and was later sentenced to eight years in prison. Ms. Zhao Zhiyan was sentenced to seven years. Ms. Su Jinrong was sentenced to five years and is still detained in the Tianjin Women’s Prison. Ms. Wang Mei, Ms. Shao Shuwen, and Mr. Yang Jiangshan are still in detention and there is no news about their current situations.

Ms. Liu Qiuxiang was arrested on December 21, 2020, as well as her son (non-practitioner). She was recorded by a surveillance camera when she distributed truth-clarifying materials. Her son was released later. It is unknown where Ms. Liu is detained.

Ms. Chen Xuesheng was sentenced to five years in prison in 2011.

Ms. Shi Yan'e was sentenced to three years in prison in 2009. Her pensions were suspended in August 2020.

Ms. Lu Mingxia was arrested and taken to a brainwashing center on December 23, 2020, by officers from the Xingfu Road Police Station. Her daughter Ms. Zhang Wei was under 24 surveillance at home. Her ID card and the salary card were taken by staff from the No. 39 Community.

Mr. Zhang Yutang's home was raided on the evening of December 21, 2020. Mr. Zhang and his wife were not at home at that time. Officers from the Mishan Police Station took Dafa books and truth-clarifying materials from his home and took his son Mr. Zhang Chuanxi to the police station. His son refused to sign the repentance statement and was taken to the Mishan Detention Center.

Ms. Wang Xiufang from Wujia Town, Yuanbaoshan District, was released from the Inner Mongolia Women’s Prison on July 5, 2020. She went to work as a nanny in Chifeng City and was arrested recently.

Ms. Li Yuqin from Wujia Town was harassed around December 23, 2020. Officers from the Wujia Town police station monitored in front of her house and threatened to arrest her if she refused to sign the guarantee statement.

Ms. Gao Xiuyan lives in Honglin Village, Taiping Township, Mishan City. She was arrested at home around 8 p.m. on December 17, 2020, by officers from the Mishan City Domestic Security Division. Her home was ransacked. More than 300 items of truth-clarifying materials were taken away.

Ms. Gao was threatened with her husband’s employment and her son’s schooling and signed the three statements. She was still subjected to five-day detention but was released around 8 p.m. on December 18, 2020, because of her heart problem found during the mandatory physical exam.

Ms. Gao was taken away on December 25, 2020. The police claimed that she would be detained for five days.

Ms. Xie Wenyu and Ms. Xie Bifang from Longping Township were arrested on the morning of November 2, 2020 for clarifying the truth. Yang Qihong, a 610 Office head, and police officers took the two practitioners to the Fuyuanlu Police Station for interrogation.

At the end of this summer vacation, the principal of the Xujiadian Central Primary School requested Ms. Yu to sign the guarantee statement otherwise she would be put into a brainwashing class.

Her son-in-law who married her youngest daughter, worked in the No. 2 Hospital of Xujiadian. He dared not visit Ms. Yu for eight years because of the persecution of Falun Gong. He also received harassment phone calls.

Ms. Wang Yuhua and Ms. Lang were arrested around 11 a.m. on December 26, 2020, when they were clarifying the truth in Mu Village. Three or four officers from the Jiulong Street Police Station in Fangzi District arrested them and searched their homes. They did not find anything. The two practitioners were released that afternoon.

Ms. Wang Ying, Ms. Pan Sufang, and Ms. Li Ruiqin from Yuanbaoshan District were reading the Falun Gong teachings when five police officers broke in. The police took away their three books, three media players and their cell phones. They took the practitioners to the local police station for interrogation. They were released three hours later.

Ms. He Xiufeng (nearly 80) from Jiachuan Town, was tried in the Wangcang County Court on September 21, 2020. She was sentenced to two years in prison, suspended for three years, and fined 1,000 yuan. Her pension was suspended recently by the Social Security Bureau.

Ms. Bian Lixian was arrested at home on the morning of December 9, 2020, by officers from the Donghe Town Police Station and the Wangcang County Domestic Security Division. Her home was ransacked. The police took away several Dafa books, a computer, a printer, and truth-clarifying materials. Ms. Bian was taken to the police department. She was handcuffed and was forced to sit on a metal chair for interrogation. She refused to answer any questions. She was taken to Guangyuan Detention House but was rejected because she failed the required physical examination. She was let go.

Practitioners in Jingyan Town, Jingde County have been harassed since the beginning of December 2020 and were pressured to sign the guarantee statement. Mr. Qian Yunfeng, Ms. Feng Suyun, Ms. Song Fengyun, Zhu Xiuhua (gender unknown) and Ms. Bao Huilian have been harassed at home. Ms. Song, Zhu and Ms. Bao refused to sign the statement. They were threatened with their employment and their salary. Their family members were also repeatedly harassed.

Ms. Wang Hongmei lives in Dongliu Village, Chengguan Town, Yanshan County. She was arrested on the afternoon of December 23, 2020, by officers from the Yanshan County Police Department. She is currently detained in the county detention center.

Twelve people from the Chengnan Police Station and the Jiangjun Road Sub-district Office in Zichuan District went to Ms. Wang Suhua’s home in December 2020. They intended to take her to a brainwashing center. Ms. Wang was not at home at that time. She later left home.

Mr. Li Zhanjun from Wuyuan Village was arrested around August 24, 2020. He was reported to the police when he posted truth-clarifying materials.