(Minghui.org) Today's news from China includes incidents of persecution that took place in 17 cities or counties in 9 provinces, where at least 36 practitioners were recently persecuted for their belief. 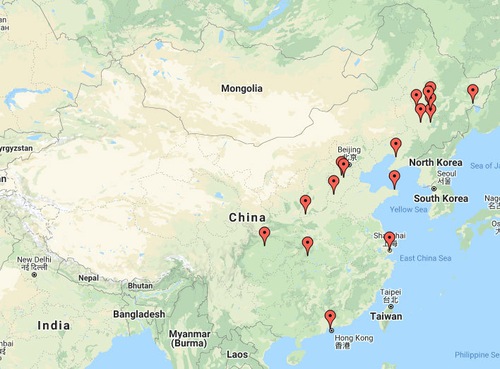 Jishan County officials called Mr. Jia Guojie’s non-practitioner mother to village head Zhang Hongyi’s home in November 2020. They pressed her to tell them where her son Mr. Jia Guojie went to work. They were getting ready to have him sent to the Linfen City Brainwashing Center. They also ordered her to write guarantee statements, but she had not learned to write.

A few days later, village accountant Jia Liuwa took guarantee statements they had written to her home and forced her to sign them. Mr. Jia’s mother was traumatized by the harassment.

Ms. Guo Xiangyue from Xinhe County was arrested while distributing Falun Gong materials on the morning of December 8, 2020. Her home was ransacked. She was detained.

Ms. Jian Fengqiong from Futian District has been missing for over ten days.

Prior to this, community workstation staff and residential officers came to her rented place. She did not open the door and promised to look for them at the workstation the next day.

The next day she went there, and community members tried to “transform” her. She stated that she will persist in cultivating Falun Dafa and nothing could ever change her mind. After that day’s event, she went missing.

The Party secretary of the Mishan Town Government once again harassed Mr. Zhang Yutang on December 11, 2020. Mr. Zhang had just been released from prison for 14 months. The Party secretary told him to write a guarantee statement, and threatened to lock him up and sentence him to prison if he did not write it.

Personnel from the Fendou Community in Shuangcheng District knocked on the door of Ms. Wang Xiaohui’s home on November 26, 2020. They told her to sign guarantee statements.

After that, they called her twice and also called her husband. They threatened that if she did not write the statements, they would send her name to the Shuangcheng Police Department for the police to deal with her.

Ms. Wang Yunqi and Mr. Li Changzhu from Xiangfang District will be tried on December 19, 2020.

Personnel from the Jishun Community in Nanguan District knocked on the door of Ms. Qiao Xin’s home on November 4, 2020. They also called her child to tell her that she had to go to the community office and sign guarantee statements. She refused to do so.

In early December, officers from the Yongji Police Station called her child and said that they would visit his home a few days later.

They ordered him to “transform” and write guarantee statements, but he refused. They threatened that if he did not write the statements, they would keep coming to harass him.

Ms. Che was transferred to the Nanshan District Detention Center on August 24, 2020. While in the detention center, she developed severe hypertension 170/180. Throughout her 11 days of stay in the hospital, she had been handcuffed and shackled.

Ms. Shi Yajuan, 65, received a notice from the Huangpu District Social Security Agency on November 30, 2020. She was told to go through the procedures within five days to deduct pension payments she received during her three-year prison term, otherwise her pensions would be suspended.

Later, she went to the insurance agency to check. Officials wanted to deduct nearly 140,000 yuan from her pension. These included pensions received during her three-year prison period, the annual increment in those three years, and all subsequent and future years of annual increment had to be re-calibrated from before her prison term.

Practitioner Song Wentao (gender unknown) was followed and arrested by two officers from the Qiaotou Town Police Station on December 1, 2020, while she was talking to people about Falun Gong and distributing Chinese New Year paintings and calendars at Qiaotou farmers market.

The officers confiscated over 40 calendars, over 20 paintings, and over 20 keepsakes. Song was released that day.

People from the Lingjiang Police Station, the Lingjiang Town government, and the Guangming Community in the Beimengou area harassed Mr. Cheng Yong and took photos of him on the morning of October 27, 2020.

Four officers from the Cangxi County Police Department and the Lingjiang Police Station and six staff members including Xu Xiuhua from the Beimen Community broke into Ms. Zhang Zihui’s home and ransacked the place on October 27. They confiscated photos of the founder of Falun Gong, three copies of Falun Dafa books, and six boxes of incense sticks.

Ms. Zheng Hongqin was arrested at home on November 25, 2020. Her home was ransacked. She is currently held in Changchun City and hospitalized. No one is allowed to visit her.

Ms. Yu Hua was arrested by officers from the Yihe Road Police Station near her home on December 2, 2020. She was taken to the Weizigou Detention Center for 10 days of detention.

Officers took Ms. Yu and Ms. Li Weiqing to a detention center on the morning of December 12.

On December 10, the Xinfu Township Police Station told the family members to sign the arrest warrant at the police station, but the families did not cooperate.

Mr. Han Yuntai, 82, from Maoling Village, Kuangdonggou Town, Gaizhou City, was arrested by officers from the Gaizhou City 610 Office, the Domestic Security Division, and the local police station at 9 p.m. on October 31, 2020.

It was reported that he was sentenced to three years in prison by the Gaizhou City Court. It is not clear where he is being held.

Officers from the Gaoyang County Domestic Security Division and the Xiaowangguozhuang Police Station broke into Ms. Wang Liandi’s home and ransacked the place on July 20, 2020. They confiscated Falun Dafa books, three or four audio players, photos of the founder of Falun Gong, and several cell phones.

Another practitioner, who was visiting her at the time, was also taken to the police station.

At the police station, the officers interrogated Ms. Wang and forced her to sign paperwork, but she refused. The police kept pressing her until three o’clock in the morning the next day. Her son had been waiting at the door. She was taken to the Gaoyang County Detention Center.

Ms. Wang was taken to the county hospital for a physical examination that morning. Her blood pressure reading was 220/110. The officers asked her family to pay a security deposit of 20,000 yuan and released her.

The following day, the officers asked her son to take her to the detention center to get a custom cell phone card. Officers from the Domestic Security Division and local police have harassed her six times afterwards.

Officers from the Huanxi Township Police Station in Chuanying District went to Ms. Ma Zhiwen’s workplace in recent days. They ordered her to sign guarantee statements, but she refused. Ms. Ma is staying away from her home to avoid persecution.

They were administratively detained for 15 days. Four of them returned home after 15 days. Mr. Liu also returned home two days later after being taken to a detention center and spending two days there.