(Minghui.org) The Ottawa branch of the Global Service Center for Quitting the Chinese Communist Party (CCP) held its third car parade on September 16, 2020, calling on people to renounce their memberships in the CCP. The three-hour parade included 12 cars, each carrying signs displaying messages such as “The CCP is not China,” “Celebrate 360 Million People Quitting the CCP,” “QuitCCP.ca,” etc.

The parade set off from the Ottawa Epoch Times office, drove down highway 417, and stopped at its first destination, the Chinese Consulate. Then the procession drove to Chinatown and shopping areas popular with Chinese residents. Many people gave them thumbs up and called out, “You are so brave!” “God bless you! We’re with you!” “Good job!” 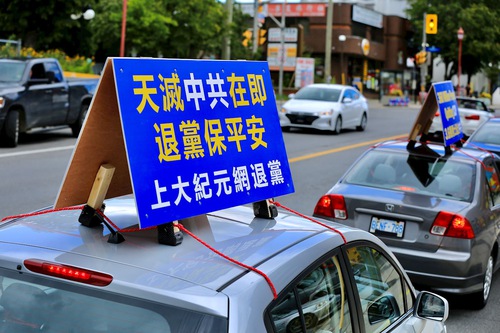 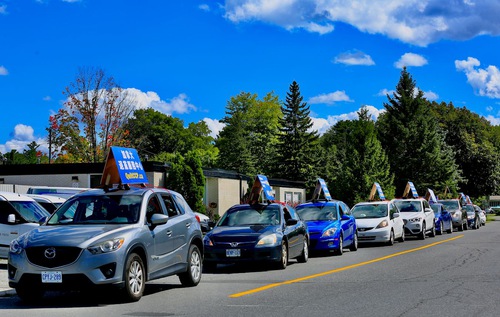 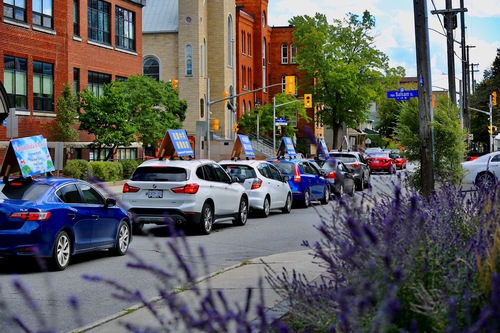 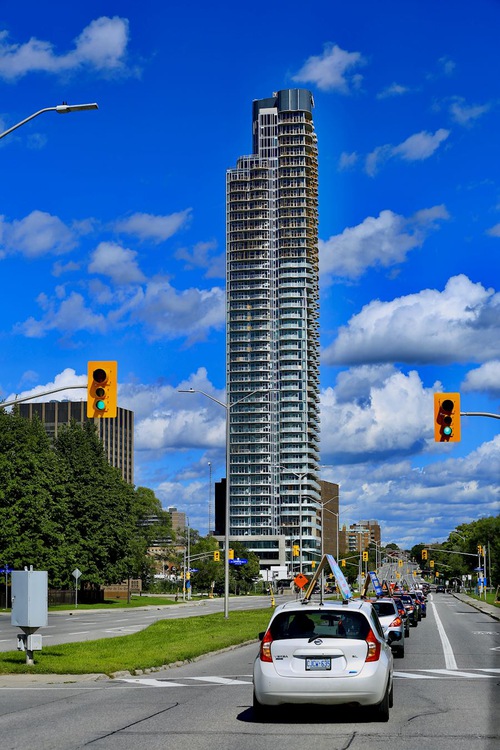 The car parade drove through downtown Ottawa, the Chinese Consulate, Chinatown, and other areas, calling on people to renounce the Chinese Communist Party. 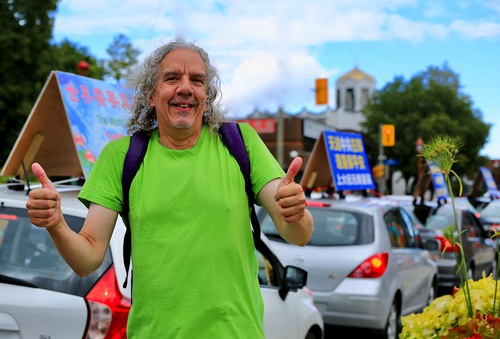 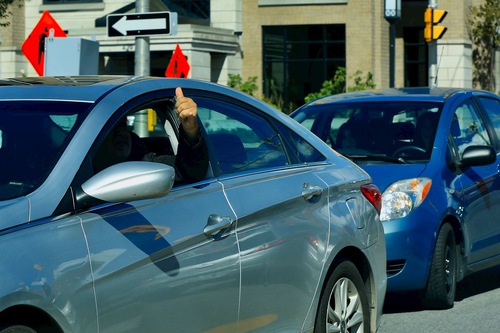 Several people gave practitioners thumbs up to show their support.

The Service Center’s car parades over the last three weekends received support from both Westerners and Chinese. One of the organizers, Mr. Lei Shizhong, said, “People gave us thumbs up or honked their horns to show their support. When we stopped at a Chinese supermarket, some people expressed their support and admiration. They now understand us better and show us more support and sympathy. They are also more courageous and express their dissatisfaction and anger towards the CCP.”

Three Chinese human right activists also spoke out. Mr. Liu Xinglian, Mr. Yang Chong, and Ms. Wu Yuhua said their rights were violated in China, and they encouraged Chinese people to join the tide of quitting the CCP and its youth organizations. They also praised the Service Center for its efforts to spread the message and encourage people to quit the Party.

Mr. Yang Chong: Prohibiting CCP Members from Entering the U.S. Will Cause Even Bigger Tide of Quitting the Party

Mr. Yang Chong was an activist during the Southern Street Movement, a citizen rights protection movement. He was rescued and came to Canada in 2019 and now lives in Ottawa. He praised the Nine Commentaries on the Communist Party that exposed the true history of the CCP. He said the tide of quitting the CCP will continue to weaken the Party and that if the U.S. prohibits CCP members from entering the country, it would cause even more Chinese to quit the CCP.

Mr. Yang used FreeGate to circumvent the CCP's internet censorship and read the Nine Commentaries in 2005. He published a statement to quit the CCP using a pseudonym. He said, “After reading the Nine Commentaries,I felt that the true history of the CCP was finally exposed. Chinese people, including my family and my parents' generation, have a clear understanding of the CCP. What they talked about agreed with what's written in the Nine Commentaries.”

He said that people will realize the CCP’s evil nature and quit the Party after reading the Nine Commentaries. “Many Chinese living outside of China are now quitting the Party. As the CCP’s economy continues to weaken, its influence overseas is also weakening. This includes its influence over various countries’ governments and overseas pro-CCP groups.

“In Canada, many people have withdrawn from pro-CCP groups. Now, when they see Chinese consulate staff, they walk away. In the past, having a good relationship with a CCP official was something people were proud of. Now people don’t dare to say they have a close relationship with CCP officials. They even deny it,” he said.

According to U.S. news media, the U.S. government is planning to prohibit CCP members from entering the U.S. Mr. Yang Chong said, “If you have a certificate from the Service Center for Quitting the CCP, and if the U.S. government acknowledges your certificate and no longer regards you as a CCP member, it will not prohibit you from entering the U.S. This will probably cause even more people to quit the CCP.”

Mr. Liu Xinglian: People Should Work Together to Overthrow the CCP

Liu Xinglian, secretary-general of China Rose Team and China Human Rights Watch, was illegally arrested in his home in Hainan in 2015. He was charged with instigating the subversion of the political power of the state. He was secretly taken to Wuhan and imprisoned there for over a year. While he was held in isolation in the Wuhan Police Hospital, he was constantly interrogated and never allowed to walk outside. His health deteriorated and he could no longer stand up. Only then was he released on bail. He arrived in Vancouver, Canada on July 20, 2019, and now lives in Ottawa.

He said people quitting the CCP places huge pressure on the Party. “The CCP has always used its membership to tie people to it. If people awaken and quit the CCP, that will be a big blow to the Party,” he said.

Liu said the communist regime is now beset with difficulties on all sides. “We should pull together to stop the CCP from invading and expanding throughout the world. The CCP is deceiving medium and small-sized countries with its so-called One Belt One Road. Many countries have boarded the CCP’s pirate ship for the sake of their self-interest. We must have a clear understanding about this. We must collaborate to overthrow the Party's tyranny. Only by doing this can we enjoy safe and peaceful lives. The CCP is a hundred times more evil than the former Soviet Union.

“I escaped from China,” he said. I know the CCP monitors every individual with high-tech means. The CCP is not benefiting mankind. It controls people in order to maintain its power. We have to help people understand this. We have to rise up against the CCP. Only then can China have a way out.”

Liu said Chinese people of different religions and ethnicities should let go of fear and work together to overthrow the CCP's tyranny.

Ms. Wu Yuhua (with an online nickname of AiWu) was also rescued from China in 2019. She said, “Quitting the CCP is such a good thing, and more people should do it. You can imagine how unpopular the CCP is in China.”

She said China’s human rights situation continues to deteriorate, as many people have been sentenced to over 10 years in prison just for just speaking freely on the Internet.

Ms. Wu said the CCP’s own behavior is causing it to be isolated by the international community.

“Repeatedly Arrested and Detained, Retired Nurse Arrested Once More for Her Faith”