Austria: Calling for Justice for Falun Dafa at Rally in Vienna

(Minghui.org) Falun Dafa practitioners held a rally on Karlsplatz, Vienna, on September 12, 2020, to tell people about the spiritual practice and how the Chinese Communist Party (CCP) persecutes it. The rally was followed by a parade led by the Tian Guo Marching Band, a Golden Dragon, and the Waist Drum Team. The parade was the first one held in Vienna after the pandemic spread throughout Europe.

After learning about the tortures practitioners in China have been subjected to during the 21-year-long persecution, many people signed the petition calling on the CCP to end it. 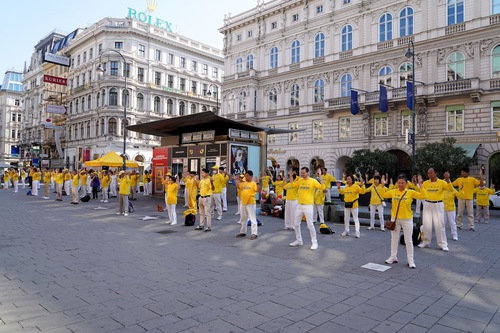 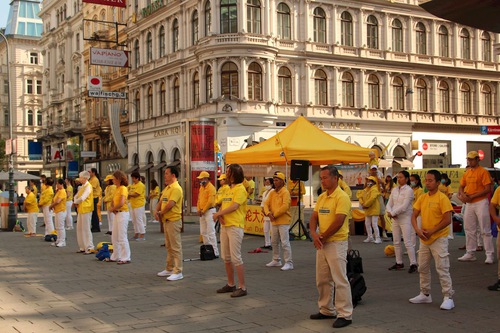 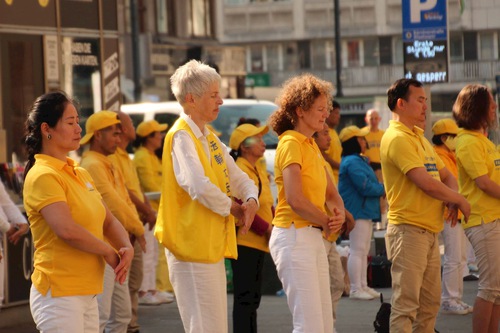 Practitioners from nearby European countries gather on Karlsplatz in Vienna, Austria. They demonstrated the five Falun Dafa exercises and told people about the practice. 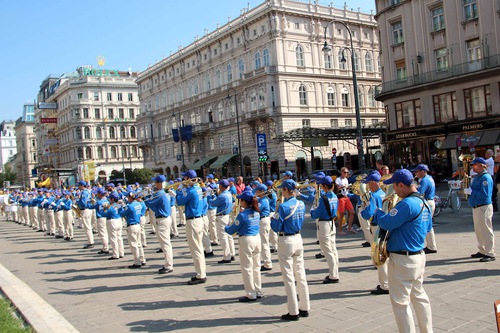 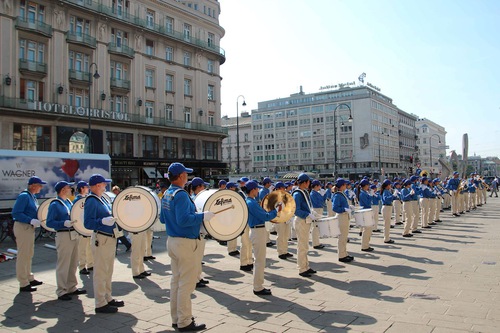 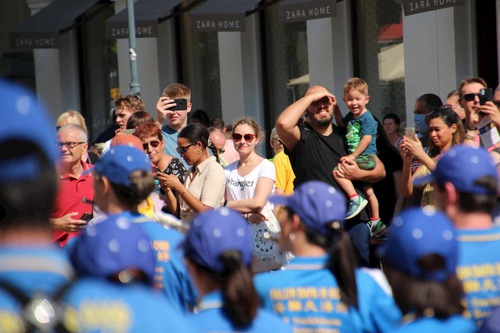 Gabiele Beckels watched the exercise demonstration and said, “The practitioners look very peaceful and uplifting. They give out such positive energy and are full of hope. I really want to sit with them.” She pointed to the police officers on duty and smiled and said, “Even the police officers are smiling to see you. This is beautiful.” 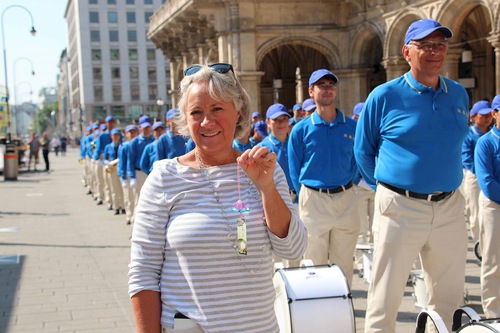 After learning about the tortures practitioners are subjected to and the atrocity of the CCP harvesting organs from living practitioners, Beckels signed the petition to condemn the persecution. “It’s a disaster and I need to take action and do something to stop it,” she said. She said she would tell her friends so that they could sign the petition online. 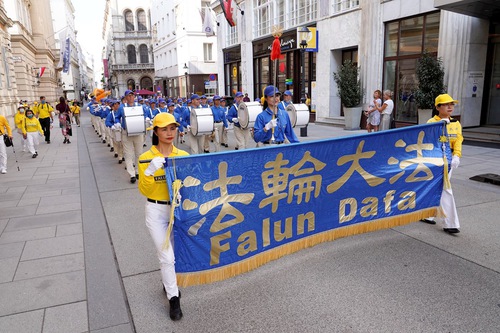 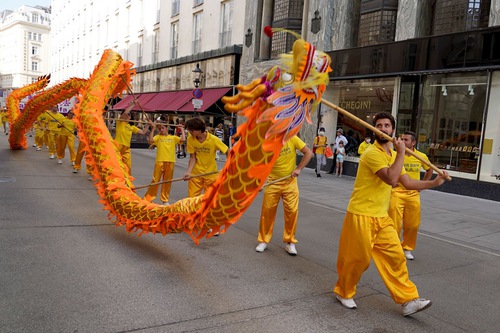 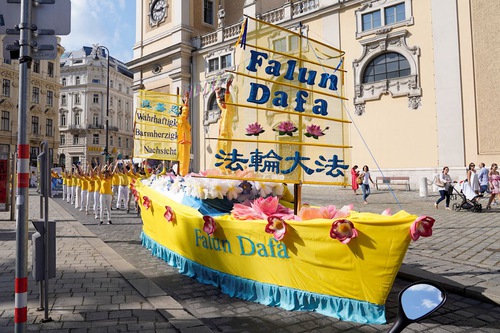 The Falun Dafa Boat signifies hope for the future.

Tian Guo Marching Band's performances drew a lot of attention. A tourist from the Netherlands recorded the parade. He said that he heard the music from his hotel room and came to listen, “It made me feel happy. I wanted to know what it was and so I came downstairs. The colors used in the parade are very nice.”

A woman got off her bike and read the flier a practitioner gave her. She smiled and said, “The music is so nice that it can open up one's heart. What attracts me is that the performers seem very peaceful and friendly, which makes me want to know more about them.”

Mrs. Helga Mayr lived in New York City for many years and knew about Falun Dafa. “This is the first time I see practitioners in a parade telling people what is happening in China. It’s such a beautiful thing. I enjoy the brilliant mix of colors and the costumes. I know that practitioners uphold and promote traditions.”

Mrs. Mayr and her husband explained that they came specifically to see the parade. When they saw the re-enactment of a living practitioner’s organ being harvested for sale, Mrs. Mayr told her husband, “Look, how cruel!” They both signed the petition to condemn the persecution.

She said, “The persecution should stop, it is absolutely inhumane! The CCP must be kicked out of China.”

Before she left, Mrs. Mayr wished all practitioners well. “We support you. Please continue to let more people know about this. One day the persecution will end!” Mr. Mayr also encouraged the practitioners. 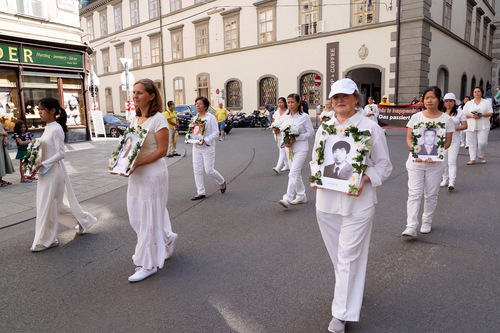 Practitioners hold photos of practitioners who died as a result of the persecution, in order to expose the true nature of the CCP. 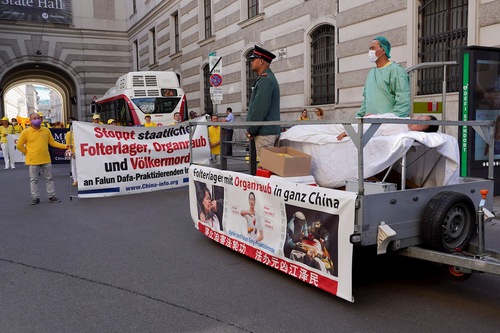 Demonstration of a form of torture used to kill Falun Gong practitioners in China: Harvesting their organs while they are still alive and selling the organs for transplants. 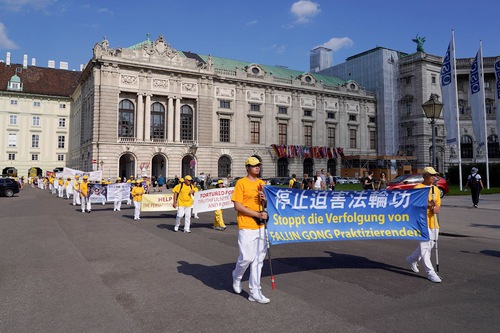 Banner calls for an end to the CCP’s persecution of practitioners in China. 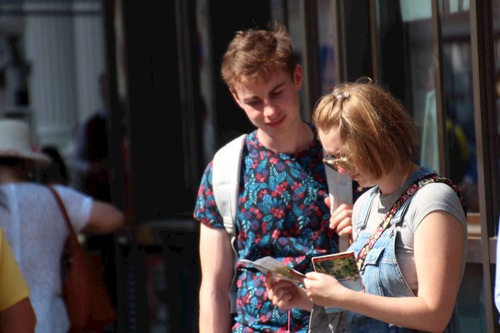 Spectators read the fliers practitioners handed out during the parade. 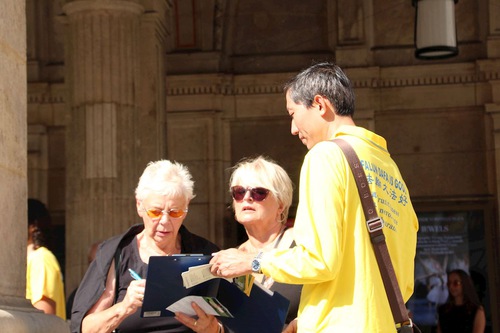 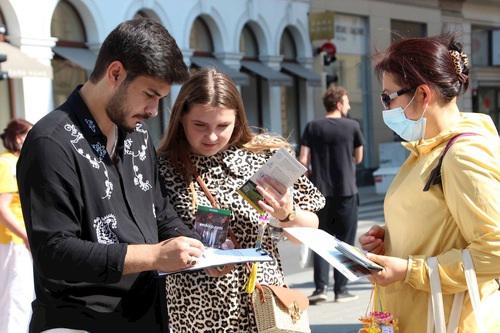 After learning about the persecution and the forced organ harvesting, many people signed a petition calling for its end.

Daniele Ilian signed the practitioners' petition last year. She believes that it is very important that western governments stand up and boycott the atrocity of harvesting organs from living people. “People should not steal others’ organs against their will. It is despicable that the CCP uses its people and takes their organs by force. The CCP tramples human rights.” She hopes more people will sign the petition to urge the Austrian government and the EU to fight to end the persecution. She planned to tell her family and friends about Falun Dafa and ask for their support. 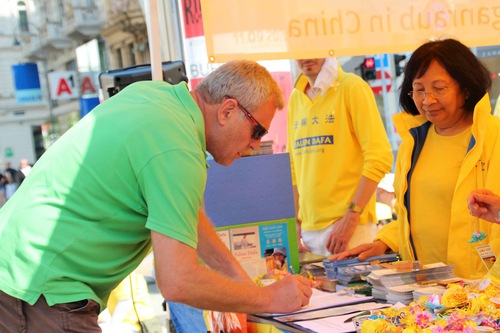 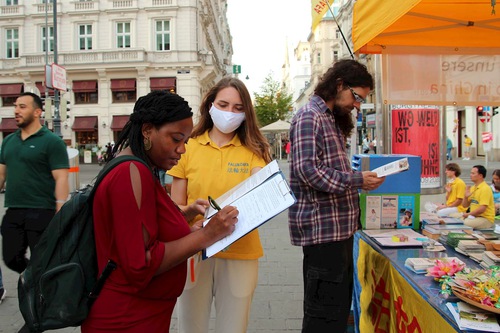 Several people condemned the persecution of practitioners and signed the petition to end it.

Andre stopped to watch practitioners demonstrate the exercises and noticed the petition. After signing it, he said, “I support the practitioners. Harvesting organs from living people shouldn’t exist in modern society.”

Wolfgang Fuchs also signed the petition. He said what the CCP did was “extremely inhumane and shameless.” “It makes ludicrous profits at the cost of others' lives.”

Christe Schacht believes that stealing people’s organs is the worst thing anyone could imagine. “The idea of killing people to make enormous profits is horrifying. We have to stop this,” she said. 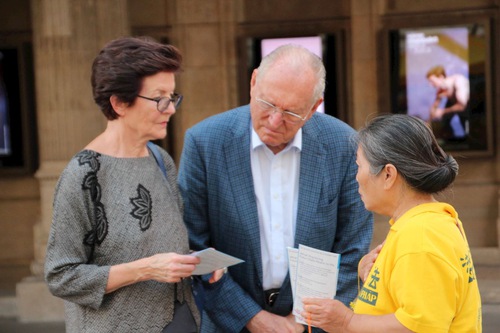 Dr. and Mrs. Loeber signed the petition to send their support to Falun Dafa practitioners in China.

Dr. Heinz Loeber is a retired lawyer who is interested in international affairs. Through signing the petition he wished to “express our sympathy from the west to the practitioners in China and let them know that the world knows about their sufferings through the work of practitioners outside of China.”

His wife Mrs. Heidi Loeber already knew that the practitioners were tortured and badly treated during the persecution. She said that harvesting organs from living practitioners was “horrifying and cruel.” 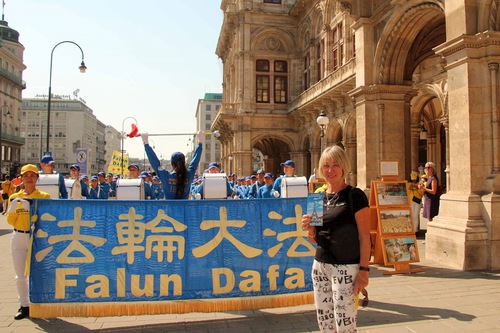 Rita Heese praised the practitioners and said what they did was “great and very important. Trafficking human organs is despicable and should be condemned,” she said, “If more people can pay attention to this instead of ignoring the issue, we can spread awareness and help stop it.” She also asked her friends to sign the petition. “Everyone should live freely and not be persecuted for their faith,” she said.

“The Winding Path of a Former Lay Buddhist”