(Minghui.org) Falun Gong practitioners set up posters in London's Chinatown, demonstrated the exercises, distributed fliers, and raised awareness of the persecution in China on September 3, 2020. They called on the international community to help stop the Chinese Communist Party’s (CCP) 21-year-long persecution of Falun Gong.

“I know that the CCP regime has done many bad things,” said Aveny, a British citizen whose parents are from Hong Kong. “You [Falun Gong practitioners] just ask to keep your belief. No one should be deprived of their freedom of belief. The persecution violates basic human rights, so I am signing the petition to support you.” 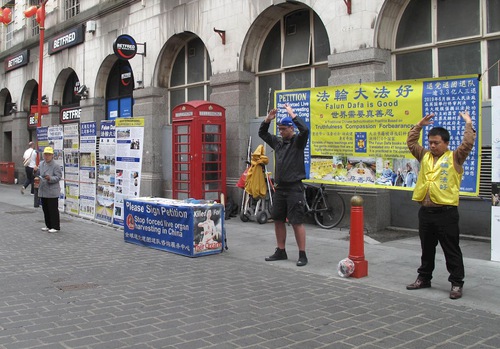 Falun Gong practitioners introduce Falun Gong in London's Chinatown and raise awareness of the persecution in China on September 3.

An undergraduate majoring in psychology, Aveny commended the Falun Gong principles of Truthfulness-Compassion-Forbearance and said she wished more people would learn about Falun Gong and the CCP’s persecution. 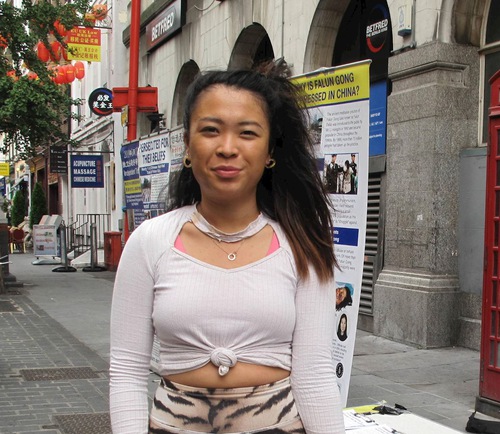 Aveny studied the Falun Gong posters for some time and said that what the CCP has done recently has shown her very clearly what the Party is really like.

She was appalled at the CCP’s state-sanctioned organ harvesting from living Falun Gong practitioners for lucrative profits. She said she had learned about the atrocities in China when she was in Hong Kong on vacation. She came across Falun Gong activities there and read several posters with information about China's organ harvesting. She wanted to support Falun Gong.

“The CCP’s persecution of religious groups and dissidents is really brutal,” she said.

Aveny was sad about the situation in Hong Kong, where the CCP has been suppressing freedom. “I hope Hong Kong can stay away from the CCP’s control.”

She admired Falun Gong practitioners' courage in exposing the nature of the CCP. A practitioner told her that about 360 million Chinese people have renounced their memberships in the CCP and its affiliated organizations. Aveny was happy to hear that and expressed her support.

She commended practitioners for continuing to raise awareness in London's Chinatown and said she hoped more people would learn about the situation in China.

“Once Imprisoned for 11 Years, Jilin Man Dies a Month and a Half after Latest Arrest for His Faith”