(Minghui.org) Today's news from China includes incidents of persecution that took place in 24 cities or counties in 10 provinces, where at least 67 practitioners were recently persecuted for their belief. 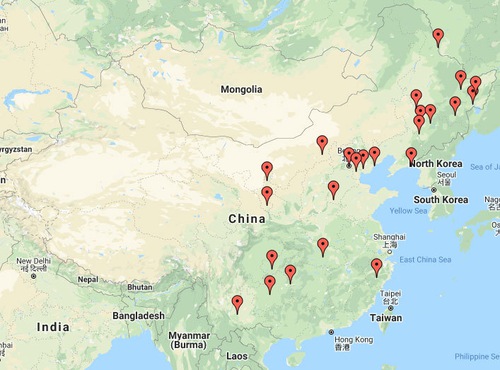 Ms. Pang Yanmei has been held in custody for 17 days. Her family went to the Erdao Police Department and demanded her release on August 17, 2020. The police said Ms. Pang is now under residential surveillance. Her family members were not allowed to visit her.

The Zhifeng Town Party Secretary and officers from the Zhifeng Police Station in Dazu District went to Ms. Tang Dayu’s home and harassed her in mid-July 2020. They photographed her and told her to sign and fingerprint paperwork. She refused.

The officers and the Pu’an Village Party secretary went to her daughter’s shop on August 13, and told her to fingerprint and sign pre-written “five statements” renouncing Falun Gong.

Yan Jian, Party secretary of the Yongyi Residential Community, Xie, head of the 610 Office, and other people went Ms. Long Changqiong’s home on the afternoon of July 30, 2020. Xie viciously slandered Falun Gong. Ms. Long was videotaped. They attempted to force her to sign and put her personal seal on the “five statements” they prepared renouncing Falun Gong. She refused. When they left, they threatened to return.

Party secretary of the Longshuihuashi Street residential community, and officers from the local police station broke into Mr. Zeng Xiangjing’s home at noon on July 28, 2020. They took photos of Mr. Zeng and Mr. Jiang Changwu. The police took out the pre-prepared “five statements” and told them to sign it and fingerprint it.

Ms. Yuan Qichan has been harassed over the phone several times in the past two months. She has also been visited four times at home and threatened, all in an attempt to make her write the three statements renouncing her belief.

Wankedaduhui Residential Community personnel in the Xiaohe District went to Ms. Yuan’s home and harassed her on April 14, 2020.

Sun Xiangdong, director of the Yonghong Factory Ministry of Political Work, Guihang Group, Xiaohe District, found Ms. Yuan’s husband and harassed and threatened him on May 11.

The residential community personnel knocked on her door three times on May 14.

The residential community personnel called Ms. Yuan on July 23, and attempted to force her to sign the three statements. She refused. Then they threatened her husband to sign the statements. They claimed that failure to sign would affect all three generations in the couple’s family. If he did not sign, Ms. Yuan would be forcibly taken to the brainwashing center.

Officers from the Liangshuijing Police Station and sub-district personnel broke into Ms. Yang Jingui’s home in January 2020. They took photos of her, and attempted to force her to sign the three statements. They returned to her home and demanded that she sign, threatening to dismiss her child from school if she refused.

Over 40 people including the residential community Party secretary and 610 Office agent Hua Yong broke into Ms. Yang’s home while she was making lunch at noon on April 29, 2020. They searched her home and took her to the police station, where the officers took turns to interrogate her. Ms. Yang’s two cell phones were held by the police.

On the evening of August 8, her husband’s sister and brother-in-law were threatened by 610 officers. The officers told them to help them persuade Ms. Yang to sign the three statements. They said if she did not sign, she would be taken to a brainwashing center.

The Fengnan District Police Department carried out a coordinated campaign to arrest practitioners and ransack their homes at around 5 a.m. on August 12, 2020. They were attempting to force them to give up Falun Gong.

Mr. Dong Jianquan, Mr. Dong Jinbo, and Ms. Dong Limei were arrested by Wang Xiaodong, director of the Yinfeng Police Station, Fengnan Town, and other officers. They confiscated Mr. Dong Jianquan’s TV set, backpack with 3,000 yuan cash in it, and an electric tricycle he used to pick up and drop off his child.

At the police station Mr. Dong Jianquan was abused for not giving up his belief. As a result of abuse by director Wang Xiaodong and other officers, he suffered stomach perforation, bleeding, high blood pressure, and high blood sugar. He was admitted to the hospital on August 15. The police coerced his family to pay 9,000 yuan for hospitalization.

Ms. Chen Songyan, 57, from Bei’an City was given a seven-and-a-half-year prison term and fined 10,000 yuan. She appealed to the Heihe City Intermediate Court, which upheld the original verdict on July 22, 2020.

Mr. Zhu Jianhua, in his 60s, was arrested at home in recent days.

Mr. Zhang Liang was arrested by officers from the Donggang City Police Department and the Domestic Security Division on August 17, 2020. He was held at the Xiangyang Police Station that night.

Ms. Shang Shuqin was arrested on February 29, 2020, and released on bail the same day.

She was taken to a lockup center on July 31, but the center refused to admit her after she failed the physical examination.

Ms. Wang Yan from the Fuxing District was arrested by officers from the Hualin Police Station on August 17, 2020.

Hualin Residential Community personnel went to Mr. Hu Kaoshi’s home on August 14, 2020. Mr. Hu was told to pack up all of his Falun Gong materials at home, and if he did not cooperate, he would be taken to a brainwashing center.

Seven or eight people including residential community personnel and officers from the Hualin Police Station returned to Mr. Hu’s home two days later. They took photos of him and asked if he was practiced Falun Gong.

Officers from the Jiaoqu Police Department and the Sifeng Township Police Station went to Mr. Liu You’s home on August 18, 2020. They asked Mr. Liu if he still practiced Falun Gong.

When Mr. Liu said “Yes!”, the officers arrested him and took him to the police station. They attempted to force him to write guarantee statements renouncing Falun Gong, which he refused. Mr. Liu was then taken to the police department for further persecution.

Six officers from the Hualin Police Station broke into Ms. Zhu Yanhua’s home on the morning of August 14, 2020. They videotaped her and confiscated Falun Dafa books, photos of the founder of Falun Gong, printed materials, and cards with the QR code for Internet access.

Zhang Hua, the police station political head, would not let her go home. She was held in custody for three more days before she was released on bail.

Ms. Luo Xinping was arrested by officers from the Fenghuang Street Police Station when she distributed Falun Gong materials on North Fenghuang Street, Xingqing District, on the morning of August 17, 2020.

The officers told her son to pay 500 yuan for her compulsory nucleic acid testing.

Because Ms. Li Jingyan practiced Falun Gong, Qu Kai, director of Xingkaihu Farm, stopped her daughter’s job as a police officer. Her daughter had no job and lost her source of income. She went home, wept and argued with her mother to force her to cooperate with the authorities.

She tried to force her mother Ms. Li to transcribe a pre-written form with statements renouncing Falun Gong, and to fingerprint it.

Farm Director Qu also threatened Ms. Li’s daughter that if her mother did not sign the guarantee statements, he would not let her come back to work. No matter where she went to look for a job, she would not find one without his permission.

Teacher Mr. Xu Jinrong, 69, and five other practitioners were arrested by officers from the Dasuihe Town Police Station when they talked to people about Falun Gong at the Shahezi Farmer's Market on July 21, 2020.

They were interrogated individually at the police station. One practitioner developed illness symptoms at the scene and the police notified their family to go to the hospital.

Mr. Xu was given a 13-day detention on the afternoon of July 21. He was not released at the end of the detention period. He is being held in the Jilin City Detention Center.

Mr. Lei Zhenfu from Fatou Sub-district, Chaoyang District, was arrested at home by officers from the Fatou Police Station on August 18, 2020. His current whereabouts are unknown.

Ms. Guo Chunxiu, 55, from Tonghai County, was arrested at home by several officers led by Huang Chengshun, head of the Tonghai County Domestic Security Division, on May 19, 2020.

The officers confiscated a laptop, two cell phones, Falun Dafa books, and photos of the founder of Falun Gong.

Ms. Guo was taken to the Tonghai County Police Department, where she was tied to an iron chair for interrogation, with bright light beaming into her face. She was then taken to the Hongta District Women's Detention Center in Yuxi City. Her current whereabouts are unknown.

Their cases have been brought to the Luannan County Court.

Currently, Ms. Zheng has developed a growing hemangioma on her forehead. Her family found someone to ask for the detention center’s approval so that she could have an examination and treatment in the hospital. The detention center refused the request.

Ms. Kou Yanfeng, in her 40's, was taken to the Shuangyashan City Detention Center on September 3, 2019. She was sentenced to prison for a term of between three to three and a half years. She was taken to the Heilongjiang Province Women's Prison in January 2020. She appears to have become mentally disordered as a result of frequent beatings, among other abuses.

Officers including Wang broke into home of Mr. Wang Zhizhong and Mr. Tan Xin and arrested them at 7 p.m. on July 31, 2020. They confiscated 61 Falun Dafa books. Both practitioners were taken to the Quan’an Police Station on Lequn Street.

Mr. Wang did not cooperate when the officers searched his home. To punish him, Officer Wang dragged him across the gravel outside. Mr. Wang’s arms and knees were badly bruised and bleeding.

Both practitioners were detained for 15 days. They have returned home.

Ms. Fan Shirong was given a two-year prison term. She is appealing the verdict.

Mr. Wu Gaoming in Jining City was arrested at home by the Jining City Domestic Security officers on the afternoon of July 29, 2020. He was taken to the Qiaoxi Police Station, where the officers forcibly took his blood samples, fingerprints, and palm prints. They took photos of him, recorded his voice and ocular images, and measured his height.

Ms. Sun Cuiping from Yuelong Village was arrested, and her home was ransacked. She may now be held in the Ninghe District Detention Center.

Ms. Shun Jianping from Yuchao Village was arrested and her home was ransacked. She was released on bail and extorted 5,000 yuan after being interrogated.

Ms. Liu Shujin from Yuchao Village was arrested and her home was ransacked. Her son, from the same village, was also arrested and his home was also ransacked. Her son was released that day. Ms. Liu has been released on bail due to high blood pressure and fever that she developed in recent days. She returned home after paying a deposit of 5,000 yuan.

Ms. Sun Yanping from Xiweidian Village was arrested and her home was ransacked. She is being held in the Wuqing Detention Center.

Officers from the Dapuhe Border Police Station, Changli County, went to Ms. Yang Wenying’s home in Yangwa Village and harassed her on June 24, 2020. They forcibly took photos of her and videotaped her.

Officers from the Dongfeng Police Department, the Jianguo Road Police Station, and Li Wei, from the Bureau of Justice took Ms. Sun Yanhuan to the Xiangyang District Procuratorate on August 7, 2020.

Ms. Sun sent a “no-prosecution self-defense opinion” through EMS to the Procuratorate’s Prosecution Section on August 10.

Two prosecutors from the Prosecution Section of the Procuratorate sent her a statement on August 13. They told her to write guarantee statements renouncing Falun Gong. Ms. Sun refused to cooperate.

Menyuan Prison of Qinghai Province:Mr. Hu Jianhua was given a seven-year prison term.

Wuzhong City Detention Center:Ms. Guo Yulan had been held in custody since November 15, 2019.

“Measuring Ourselves With the Standard of the Fa”

“Jilin Woman Passes Away After Frequent Harassment for Her Faith”