(Minghui.org) In May 2020 Falun Dafa practitioners in Houston decided to go out every Saturday to tell people about the meditation practice and the persecution of the practice in China. The practitioners stand along Bellaire Blvd in Houston and a street in Sugar Land at noon on Saturdays and hold banners containing information about the 21-year-long persecution. The Houston police have formally approved the activities.

As August came, the temperature in the Houston area often reached 106F at noon. The persistent efforts by practitioners drew the attention of many drivers. To show their support, several drivers honked or gave practitioners a thumbs-up. One of them drove to the practitioners and told them, “You are great!” Another photographed the event and praised the practitioners for being “Truly amazing.”

A man and his wife from China saw the long line of banners along the street on June 27, 2020. He slowly walked by and, using his phone, videotaped every banner and recorded his narration. He told the practitioners that he admired their courage for standing in the heat during the pandemic to do what they believed was right. The man produces videos of local events on his social media platform. He said that he was amazed when he saw that so many people practiced Falun Dafa outside of China, and he wanted to document it. 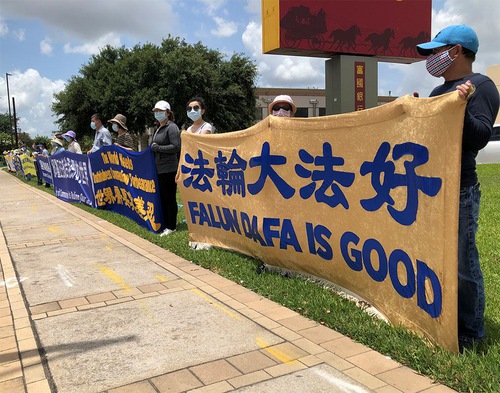 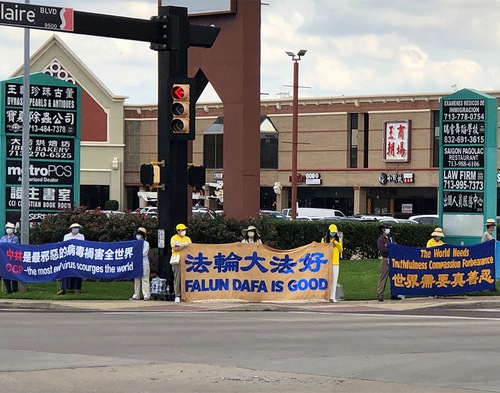 The man interviewed two practitioners and asked if they were paid. One of the practitioners Ms. Peng said, “We voluntarily came here to let more people know more about Falun Dafa. With this terrible pandemic and the intense heat, we want people to know about the persecution.” Mr. Li, another practitioner added, “To be honest, I wouldn’t leave if someone paid me a million dollars.” The man then asked if these practitioners had jobs. Ms. Peng said, “I work in a medical center and Mr. Li is a senior electrical engineer. We have jobs.” Mr. Li said that several of the practitioners holding the banners had PhD degrees. “Many of us are highly educated and are professionals from all areas, such as the petroleum industry and medical and high tech companies,” he said.

The Chinese man said that he heard of China's state-sanctioned organ harvesting from Falun Dafa practitioners imprisoned for their faith. Mr. Li told him to visit the website of the World Organization to Investigate the Persecution of Falun Gong. “You will find recordings from various investigations showing that the Chinese Communist Party (CCP) systemically targets and harvests organs from living practitioners.” “The waiting time for organ transplants outside of China is at least several years. In China it only takes a month or even a few days. Where do these massive numbers of organs come from? It is indeed killing on demand. During the pandemic the hospitals claim that they perform bilateral lung transplants. No live donor can survive that!” Ms. Peng added. 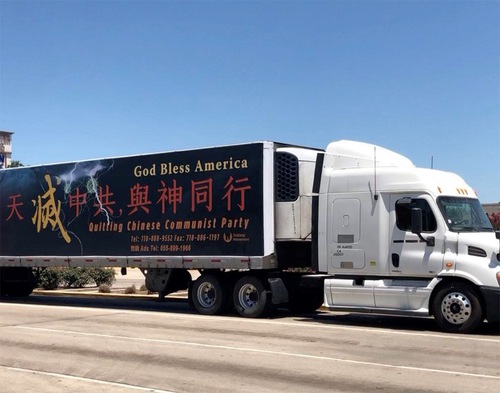 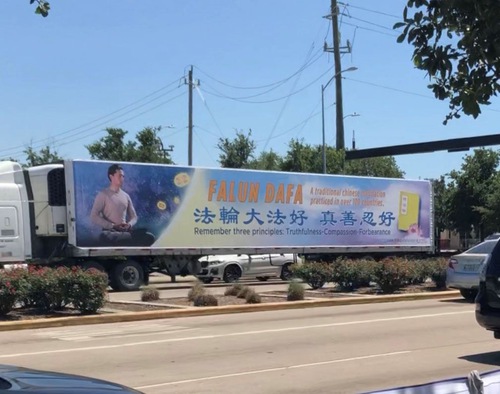 A truck with information about Falun Dafa drives around Houston's Chinatown.

Catherine Owings told the practitioners in Sugar Land that she would like to join them and help hold the banners on July 11. “The practitioners are very courageous to openly express their views, and I want to be one of them. I support freedom of belief.” Catherine said she does not believe in communism, “The goal of communism is to destroy human souls and that’s why I am against it.” 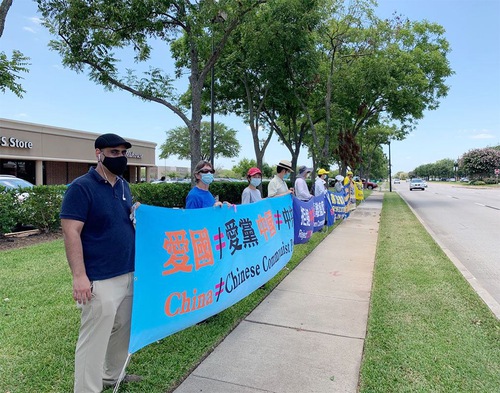 Catherine Owings (2nd from left) joins the practitioners on July 11, 2020, to show her support for freedom of belief.

Attracted by the activity, Terry stopped and listened to how practitioners in China are tortured. He agreed with what’s said on the banners, especially “China is not the CCP.” “The atrocities of harvesting organs from living practitioners must be stopped,” he said, “These crimes are a threat to the world.” 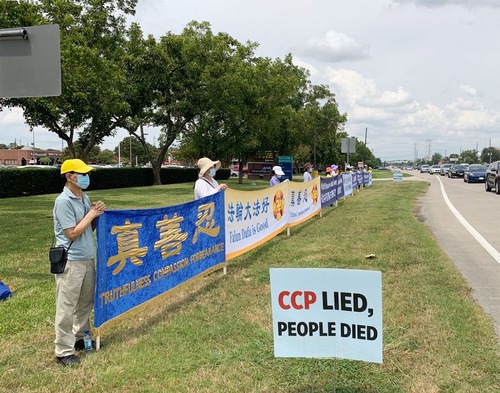 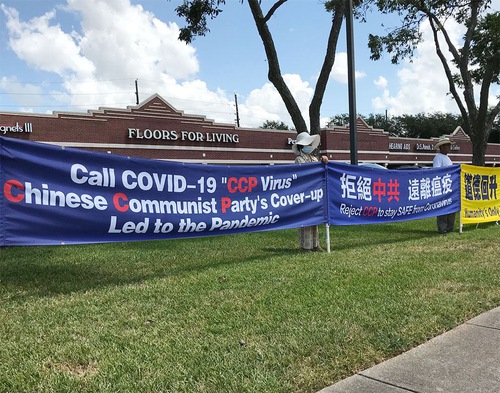 Houston practitioners hold banners in Sugar Land to let people know about the CCP’s negative impact on the world.

Elsa, a reporter from a community newspaper, came and photographed the practitioners' event and asked several questions. After learning about the severity of the persecution in China, she expressed her sympathy and admired what the practitioners were doing to spread the truth. She said that she would pay more attention to the story.

Tina, a community activist, told a practitioner, “You are doing the right thing to expose the many bad things the CCP has done.” “I read the English Epoch Times. The newspaper courageously speaks up and tells the truth. I also learned how the CCP covered up the pandemic.” She was very shocked when she learned that the CCP infiltrated the local community and threatened the businesses that sell the Epoch Times newspaper. She took a photo of the banner that says “Call COVID-19 the CCP Virus, Chinese Communist Party's Cover-up Led to the Pandemic,” and posted it on her social media page.

“Car Parade in Ottawa Supports Withdrawals from the CCP”