Car Parade in Ottawa Supports Withdrawals from the CCP

(Minghui.org) A car parade in Ottawa on August 30, 2020, organized by the Global Service Center for Quitting the Chinese Communist Party, called for people to cast away the CCP.

The three-hour-long parade passed through downtown Ottawa, by the Chinese Embassy, and through Chinatown, and spread a message of the importance of quitting the CCP to be safe. Many spectators gave the parade the thumbs-up. 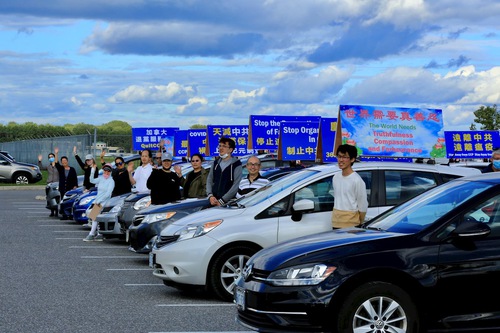 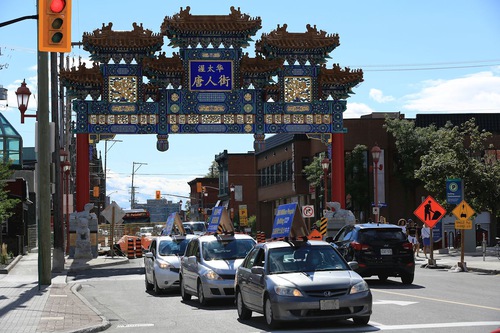 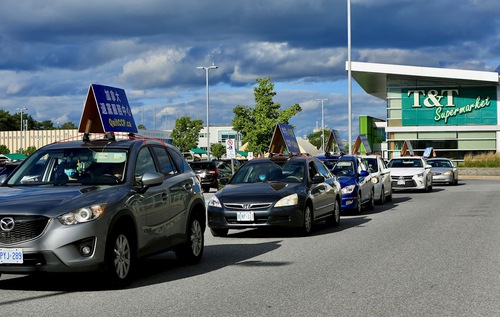 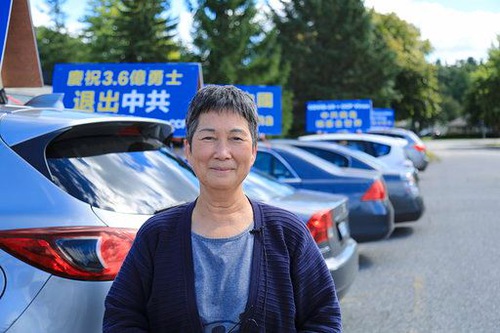 Ms. Xin Qihua of the Global Service Center for Quitting the CCP

Ms. Xin Qihua of the Global Service Center for Quitting the CCP told the reporter, “The Chinese people are awakening. They know that the evil CCP has persecuted people of all different beliefs. We would like to call for people to quit the communist organizations to be safe.”

The cars had messages on them which included, “CCP≠China,” “QuitCCP.ca,” “CCP – the Most Evil Virus,” “COVID-19=CCP Virus,” “Stay Away from CCP Stay Away from Virus,” “360 Million People Quitting CCP,” “The World Needs Truthfulness Compassion and Forbearance,” and “Stop Organ Harvesting in China.”

Mr. Ross Gillis, one of the drivers in the parade, said that the CCP’s slanderous propaganda had not only deceived many Chinese people, but also many people around the world, and put them in danger. He viewed the pandemic as a good opportunity for people to see through the lies of the CCP’s propaganda.

Mr. John Kamau, a spectator who had seen Falun Gong’s peaceful protests before, gave the parade a thumbs-up. “I like their peaceful way of spreading a message and their firm standing on their belief,” he said. “Wish them great success!”

Mr. Yang, a software engineer, said that several major situations, including the pandemic and the National Security Law in Hong Kong, had alerted the whole world to the threat of the CCP regime. He said the international coalition against the CCP dictatorship, led by the U.S., had provided the perfect juncture for China to truly assimilate into modern civilization.

Mr. Yang recognized the tide of quitting the communist organizations as an irresistible trend in history and planned to quit the Party online. He said, “The CCP has purposefully conflated the concept of the Party and the country, misleading people to regard the Party as the representative of this ancient country and its people. The common people have been confused, but we must draw this distinction.”

Mr. Yang had personally experienced how the CCP has used tools like WeChat to censor speech and extend its propaganda. He had been warned and threatened for expressing his opinion on WeChat, even though he lives in Canada.

Mr. Xiao, an immigrant from Hong Kong, said he was happy to see that the CCP’s days are numbered. He said, “The CCP has destroyed traditional values and poisoned the ancient civilization and people’s thoughts. Uprooting the CCP is the best solution for the future of China and the world. Western countries have been deceived by the CCP for decades, but they are finally awakened.”

Mr. Xiao hoped that overseas Chinese will reflect upon the CCP’s brainwashing and draw their own conclusions independently. “The CCP has lied and changed people's thoughts in an evil way since it took power,” he commented, “The courage shown by the young people of Hong Kong and their longing for freedom and democracy is truly admirable!”

Mr. Xiao was happy to see that U.S. Secretary of State Michael Pompeo had drawn a line between the CCP and the Chinese people. He also praised the principles of Falun Gong, Truthfulness-Compassion-Forbearance. “I’m not a practitioner, but I support Falun Gong wholeheartedly!”

“A Farmer Talks about Her Cultivation Journey: “Master Is Always with Me””