(Minghui.org) Falun Gong practitioners in Stockholm held activities at Mynttorget on Tuesday, August 18, 2020, to introduce the benefits of Falun Gong, a traditional self-cultivation practice, to the public.

Practitioners demonstrated the Falun Gong exercises with the soothing exercise music, which helped disperse the depressing atmosphere caused by the pandemic. Many people watched the exercise demonstration and read the exhibition boards and flyers, and several asked practitioners where they could learn the exercises locally.

Practitioner Cecilia said that more and more people have been showing an interest in learning Falun Gong recently. 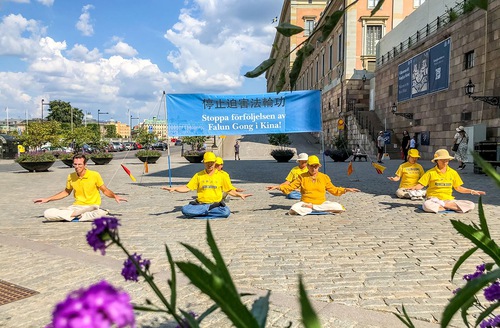 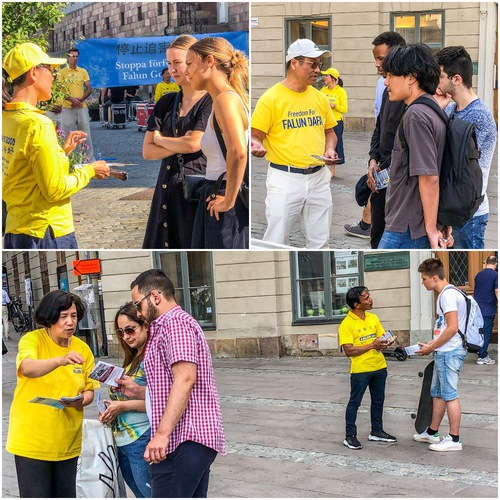 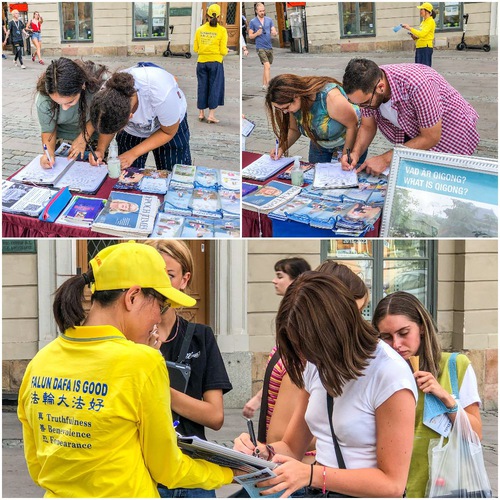 People sign a petition calling for an end to the persecution of Falun Gong.

A young couple who were fascinated by the exercises talked with Cecilia for a long time. She told them about the benefits of practicing Falun Gong, its wide spread around the world, and how following the principles of Truthfulness-Compassion-Forbearance had helped her get out of hot water.

The couple listened attentively and were outraged to hear that such a peaceful practice was being brutally persecuted by the Chinese Communist Party (CCP). They signed the petition calling for an end to the persecution and asked about the time and location of Falun Gong group exercises in Stockholm. Alexandra, the wife, said with excitement, “See you on Sunday! We will certainly learn Falun Gong! Now I know why I came here today.”

A woman who was originally from Iraq said she was happy to find this cultivation practice of mind and body. She said she planned to download the Falun Gong books to read, and learn the Falun Gong exercises at the group exercise site on Sunday.

Mr. Sun, another local practitioner, introduced Falun Gong to three young people, who listened attentively. They then signed the petition and asked Mr. Sun many questions about the meditation.