(Minghui.org) Today's news from China includes incidents of persecution that took place in 12 cities or counties in 7 provinces, where at least 26 practitioners were recently persecuted for their belief. 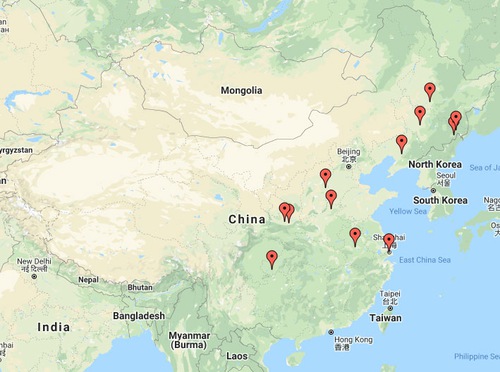 Ms. Fan Minglan lost contact with her family around January 10, 2020. It was learned on January 20 that she had been arrested by the Longjing City police. At the end of July, her family learned she had been sentenced to seven years in prison. It is not clear where she is being held.

Officers from the Qi County 610 Office, the Domestic Security Division, and police stations in various towns and townships went to practitioners’ homes, harassed them, and ransacked their places on July 19, 2020.

Ms. Cai Zhihui and her child from Shuangcheng District were reported to the police on July 31, 2020 when they were distributing Falun Gong materials in Zhenlai County, Baicheng City, Jilin Province. The plate number on their car was recorded by surveillance cameras.

The police broke into Ms. Cai's home and arrested her at midnight the following day. They confiscated a computer, a printer, and her car. The police subsequently went to her child’s place and arrested the child. It is not clear where they are being held.

Ms. Gao Baorong, 80, was reported to the police for talking to people about Falun Gong on the morning of August 28, 2019. The place where she lives, Yinying Coal Mine, was under quarantine due to the pandemic, and details of her arrest were unknown. It was reported recently that Ms. Gao was sentenced to a one-year-and-six-month prison term by the Yangquan Suburb Court, and incarcerated in the Shanxi Province Women's Prison.

Ms. Zhang Jianglian, 75, was called by a residential community director to go to his office in mid-April 2020. She was asked if she was still practiced Falun Gong. One week later, Houdigou Residential Community personnel again told her to go to the office. They pressured her to quit practicing Falun Gong.

Ms. Li Xiulian, 60, received a phone call on July 24, 2020 from officer Yang from the Hedi Police Station. He told her to come to the police station. When she got there, no one said anything to her, so she returned home. On July 29, officer Yang phoned her four more times to harass her.

Ms. Yu Aili was officially placed under arrest by the Chaoyang District Procuratorate on July 31, 2020.

Mr. Wang Lianchen, 55, is a teacher at the Chunyang Town Middle School. Five people, including officers from out of town and plainclothes officers, broke into Mr. Wang’s home at noon on September 9, 2020. They did not see his wife Ms. Fan Yanqing, and did not allow him to leave. They pressured him to tell them where his wife was.

They confiscated two computers, a set of Falun Dafa books, Minghui Weekly, and various documents. They then arrested Mr. Wang.

It was recently learned from his family that Mr. Wang was given a one-year-and-seven-month prison term, and was taken to Jilin Prison.

Ms. Rui Kerong was reported for talking to people about Falun Gong. She was arrested by officers from the Henan Police Station at around 7:00 p.m. on August 1, 2020, and detained for eight days.

Mr. Liang Lake from Shijiazhuang City, Hebei Province, was arrested by officers from the Jiangbei District Domestic Security at his residence in Chongqing on the evening of March 3, 2020. He was released the following afternoon.

The officers ransacked his home and confiscated over 40 Falun Dafa books, a laptop computer, a small tablet, an iPhone, seven U disks, printed materials, and about 200 yuan in paper bills with Falun Gong information printed on them.

Ms. Yu Xiaowei was detained in the Weizigou Detention Center.

Ms. Yu Haiying from Haicheng City was arrested at her work at Teng'ao High School on July 7, 2020. She was held in the Youyan Detention Center. She was officially arrested by the Lishan District Procuratorate on July 17.

Ms. Huang Qinxiu, 70, from Gaohang Town, Pudong New Area, was arrested at home and taken to the Gaohang Police Station by three residential community police officers, including Zhang Jun, on August 4, 2020. Officer Li Zhijun ordered five or six officers to hold her down, force her to sign and fingerprint paperwork, and photograph her. The police then took her home.

Mr. Zhang Shuqiang’s case was turned over to the Pudong New Area Procuratorate around July 20, 2020.

Mr. Tian Hui from Puxing Neighborhood, Pudong New Area, was arrested by officers from the Yangpu District Police Department on February 4, 2020. His case was sent to the court on May 21, 2020. He is being held in the Yangpu District Detention Center.

The police ransacked their home, and confiscated a computer, 13 printers, three DVD burners, an abrasive grinding machine, printed materials, and over 10,000 yuan in cash. The couple were taken to the Sanyao Detention Center after 8:00 p.m. that night.

Officers from the Chigan Police Station and other unidentified personnel went to Ms. Yuan Xiaohong’s home at noon on August 4, 2020. They demanded to know if she still practiced Falun Gong. They also asked where her older brother Mr. Yuan Guangwu, was. They confiscated a printer, among other items.

On the same day, Mr. Zhang Gang was taken from his home.

Ms. Wang was arrested when she was distributing Falun Gong materials on November 14, 2019. She was released that day, and has been living under surveillance.

“Delivering the Facts to People During the Pandemic”