(Minghui.org) Today's news from China includes incidents of persecution that took place in 19 cities or counties in 13 provinces, where at least 47 practitioners were recently persecuted for their belief. 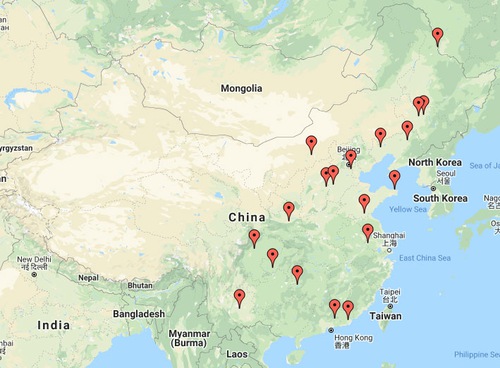 The Xi’an City Police Department and the Hongmiaopo Police Station arrested over ten practitioners in the Laoguanmiao area and at their homes, and ransacked the homes on the morning of July 26, 2020.

They were tried by the Jiulongpo District Court on July 29, 2020. Ms. Liu stated during the trial that it was entirely lawful for her to practice Falun Gong. She demanded an acquittal, and said the prosecutor was not able to provide evidence that Mr. Wang gave her the truth-clarifying materials.

The prosecutor did not respond, nor was he able to respond to Ms. Liu’s statement on how to interpret the definitions of Articles 35 and 36 of the Constitution.

Judge Wu Can interrupted Ms. Liu’s defense several times during the trial. He announced that the trial was adjourned until further notice.

The practitioners were taken to the Qinhuai District Police Department Inspection Center for testing and fingerprints.

Some were released at midnight that night. The others’ whereabouts are unknown.

Ms. Shi Jun’e, Ms. Qiao Guiying, Mr. Yin Zhihong, Ms. Mu Xindi, and three other practitioners were arrested at Ms. Mu’s home by plainclothes officers from the Yijing Police Station, Yangquan City, when they were reading the Falun Gong teachings on the afternoon of August 2, 2020. Five practitioners were handcuffed and Ms. Shi’s home was ransacked.

Three people from the North China Oilfield Service Office went to 50-year-old Ms. Cui Qingmei’s home on the morning of July 31, 2020. They demanded that she sign a guarantee statement promising not to practice Falun Gong. She refused.

More than ten officers from the Zitong County Domestic Security Division broke into Ms. Ou Zaishu’s home and ransacked the place on the morning of July 21, 2020.

Ms. Ou was not at home, so they demanded that her daughter-in-law sign the search warrant. They confiscated a large quantity of Falun Dafa books, DVDs, and other items.

When Ms. Ou came home, she was arrested and taken to the police department. Ms. Ou was taken to the Traditional Chinese Medicine Hospital for a physical examination in the afternoon. She was released due to having high blood pressure.

Ms. Yu Xuelan, in her 70s, from Zhugedian Village, Yanjiao Town, was followed and reported when she was distributing Minghui Weekly in the Zhongxingheyuan Residential Community on the morning of July 29, 2020. She was arrested by officers from the Yanshun Road Police Station, and held there for over ten hours.

Five officers ransacked her home at around noon, and confiscated over 60 Falun Dafa books, photos of the founder of Falun Gong, and a laptop computer.

Ms. Yu was brought back home after 11:00 p.m. by village director Yang Zhen and others after being extorted of 500 yuan.

Mr. Chai Maorong will be tried again by the Wuhua District Court on August 6, 2020.

The first hearing last year was adjourned after the defense lawyer stated that the court did not provide evidence. Due to the pandemic, the notice that Mr. Chai would be placed on trial again was not sent out until July 29, 2020. Mr. Chai has been held in custody for one year and four months.

Ms. Niu Shizhen and another practitioner were reported to the police when they were talking to people about Falun Gong at the Gaocun Town farmers market in Wendeng District on July 26, 2020. They were arrested by officers led by Yu Xiaopeng, squadron leader from the Gaocun Town Police Station. It was reported that they were later taken to Shidao Town.

Mr. Cheng Furong and his wife Ms. Liang Fengying will be tried by the Huimin District Court on August 5, 2020.

The couple was followed and arrested on March 9, 2020. They have been held in the Hohhot City No. 1 Detention Center for five months.

Mr. Wang Huaiyu was arrested by officers from the Nanta Police Department on March 29, 2020, for distributing Falun Gong materials. He has been held in the Chaoyang County Detention Center for nearly four months.

Mr. Zou He was arrested by officers from the Nanta Police Department on the morning of January 6, 2020, for talking to people about Falun Gong. He has been held in the Chaoyang County Detention Center for nearly seven months. His case was turned over to the Shuangta District Procuratorate. His family members have repeatedly requested his release.

A practitioner with the last name Liu from Diaobingshan City was reported to the police while distributing Falun Gong materials in Zhengjiawopu Village, Fengbeipu, Faku County, on the afternoon of August 3, 2020. Practitioner Liu was arrested by officers from the Fengbeipu Police Station, and is being held in the police station.

Officers from the Wutai Police Station went to Mr. Zheng Zhonghua’s home in Langdong Village, Wutai Township, on the afternoon of July 16, 2020 and ransacked the place. They confiscated a copy of the book Zhuan Falun.

The officers went to the homes of Ms. Dong Deqin and Ms. Zhang Fuling in Shunglong Village and harassed them at 6:00 p.m. that day. They confiscated a Minghui desktop calendar from Ms. Dong, and a copy of Zhuan Falun from Ms. Zhang. Both practitioners were taken to the police station for interrogation, and released later.

Officers from the Chaoyang Police Station went to Mr. Wang Zhijie’s home in Banlashanzi Village, Chaoyang Township, in mid-July 2020. They confiscated a photo of the founder of Falun Gong. Mr. Wang was taken to the police station, and released five hours later around 3:00 p.m.

Ms. Jiang Fengxia was harassed at home by the village accountant in early July 2020. She was told to give up practicing Falun Gong.

Government officials went to Mr. Guo Yanxiang’s workplace, Shanghewan Central Primary School, in mid-July 2020. They took photos of him. They demanded to know his phone number and National ID number, and his wife’s name and phone number.

Ms. Cai Yuying, 65, her husband Mr. Yu Chunlin, and daughter Ms. Yu Jiaoru were arrested. The anti-theft door lock of their home was pried off, leaving two large holes. The police took the couple and their daughter away without locking the door.

Ms. Cai’s son and daughter-in-law returned from Shenyang to bring their daughter to her grandparents’ home to spend the summer vacation. They found that the door was unlocked and there were holes in the door. They then learned that their parents and sister had been arrested.

The son found someone to replace the lock. He fell ill as a result of anxiety, and became unable to talk.

Ms. Cai and her daughter were held in the Changchun City No. 1 Detention Center. Her husband was held in Dehui City.

Mr. Zhang escaped through the back door. He later learned from his wife that the two men came to demand that he go to the factory to write a guarantee statement renouncing Falun Gong.

Mr. Huang Jianmin and his wife, Ms. Peng Wenjian, were secretly tried by the Rongcheng District Court at the Jieyang City Detention Center on July 27, 2020. Their family was not notified.

Mr. Zhu Xueshi, approximately 45 years old, from Zhujiazhuang Village, Tanyi Town, Fei County, was arrested by officers from the Dazhong Village Police Station, Lanling County, on July 31, 2020, for distributing Falun Gong materials. The officers ransacked his home without showing any legal documentation. At that time Mr. Zhu’s child was at home alone, and frightened. Mr. Zhu is being held in the Fei County Detention Center.

Mr. Huang Bowu from Lianping County was arrested in early July 2020. He is being held in a detention center.

“Hurry and Save More People”