Canada: Candlelight Vigil in Montreal Commemorates Practitioners Who Have Died Due to 21-Year-Long Persecution

(Minghui.org) On the evening of July 20, 2020, Falun Gong practitioners from Quebec gathered at the Place d’Armes in Old Montreal to hold a candlelight vigil for those who died due to the 21-year-long persecution. The Chinese Communist Party (CCP) initiated the persecution on July 20, 1999, targeting those who remained steadfast in their faith. The scene was very solemn as the candles gently flickered in the soft evening breeze. 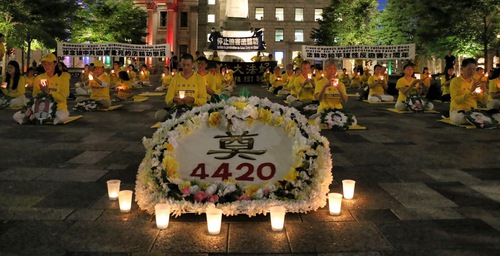 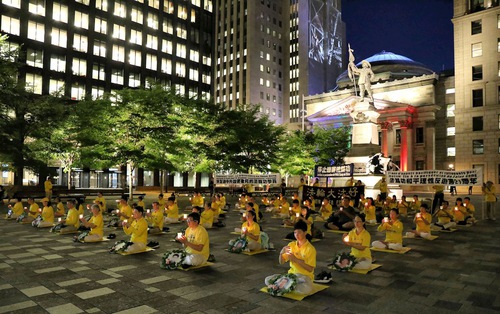 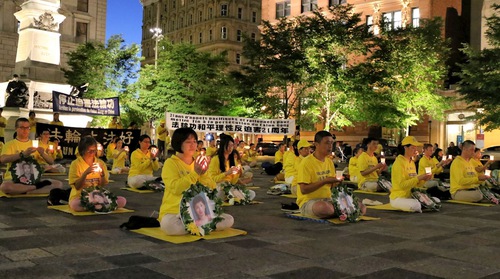 Practitioners in Quebec held a candlelight vigil at the Place d’Armes in Old Montreal on July 20, 2020, to commemorate practitioners who died due to the persecution

Ms. Wu from Huludao City, Liaoning Province in China, said that the 21-year-long persecution is very cruel. When she was in China, many practitioners she knew were brutally persecuted. Some were beaten and killed by the police and their families were broken apart. Twenty practitioners from Ms. Wu's area were persecuted to death, according to the Minghui website. She came to the vigil to speak on behalf of practitioners in China. “I hope more people will learn the truth of this persecution and more people will stand up to support justice,” she said.

She pointed out, “Falun Gong practitioners have paid a huge price in the past 21 years to end the persecution. Their persistence in faith, truth, and universal values also benefits others. The western world is beginning to awaken and there is a global movement to eliminate communism. This has a lot to do with the efforts of the Falun Gong practitioners in clarifying the truth to the world. When the CCP first started to persecute Falun Gong, 100 million practitioners were affected, and many in the West just turned a blind eye for fear of economic backlash. Some even stood with the CCP. Many nations have suffered losses as a result of this pandemic and they have started to reflect on what happened and are awakening to the truth."

Ms. Wu noted, “In ancient times when natural disasters occurred, the emperors knew to reflect on what they did wrong. With so many disasters around the world, and especially in China, the pandemic, floods, and earthquakes are all warnings to human beings. I hope this persecution will end soon.” 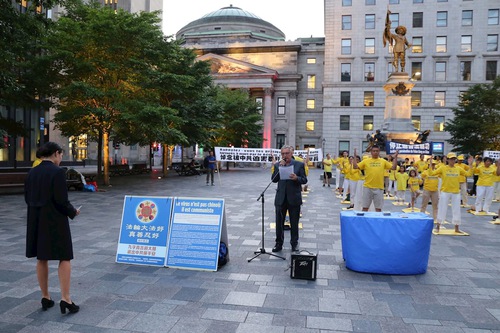 A young local lawyer, Ferra, stopped to listen to the speeches. She was surprised to see so many Chinese exposing the situation in China. She expressed her admiration for practitioners. She said she lived in Shanghai for 6 months and was disturbed to find that the Chinese have no freedom of speech and even self-censored. “The Chinese have been brainwashed. They cannot speak their minds,” she said.

She was happy to learn that Falun Gong is a spiritual discipline based on the principles of Truthfulness, Compassion, and Forbearance and gives people peace, as well as an improving mind and body. She said that as a lawyer, she needed this very much. She was shocked to hear about live organ harvesting and the extent of the persecution.

She pointed out that it was important for people to speak out against the CCP. By telling their stories they are making everyone aware. She said that the rally was very effective. It was not information on a piece of paper, but people telling what was really happening. People could feel the pain of those being persecuted, watching others hold the photos of their friends who have died. Their peaceful silence was more powerful than words.

She hopes that the persecution will end soon, but she thought that the Chinese would need to have courage like the Falun Gong practitioners. She hopes that these activities will inspire the Chinese and give them courage. It should encourage those who have remained silent to follow their conscience and speak up. She noted that the people in China have been stripped of their right to think or to express themselves and she hoped that they would hear about this rally in Montreal.

Ferra stayed until the end of the rally and then asked, “When will the next event be? I look forward to seeing all of you again!”