(Minghui.org) Today's news from China includes incidents of persecution that took place in 8 cities or counties in 5 provinces, where at least 27 practitioners were recently persecuted for their belief. 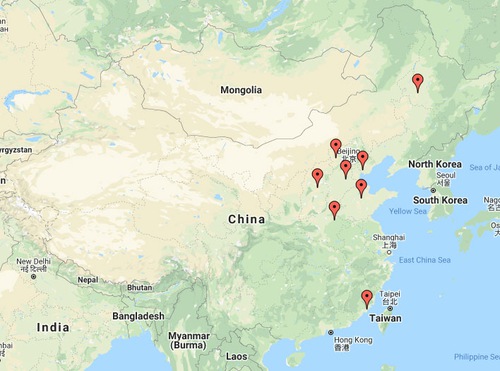 Mr. Wang Lijun, Ms. Han Xiurong, and Ms. Fei Lanying were also arrested. Ms. Yue Weifang was spared because of sickness, but her home was ransacked.

Mr. Fan Chunping, in his 60s, a retiree of the Huabei Oil Field Geophysical Exploration Corp, was arrested at home at noon of June 1, 2020. Officers from the Bohai Police Department pretended to conduct a security check and deceived him into opening his door. Mr. Fan's home was ransacked. He was held at the Oil Field Shuidian Detention Center.

His family was told that he would be released in 15 days. But when the family went to the Bohai Police Department to pick him up on June 18, they were told the detention was extended and Mr. Fan had been transferred to the Hejian City Detention Center on the night of June 17.

Ms. Zhang Bianying of Gujiao City was followed by a plainclothes officer when she distributed Falun Gong flyers in May, 2020. Officers ransacked her home on May 17, and confiscated her computers, printers, Falun Gong books, and other personal belongings. Her husband Mr. Wu Baoming was arrested the same day. Ms. Zhang is being held at Gujiao City No. 4 Detention Center and will be tried in court. Mr. Wu is being held in the Taiyuan City No. 3 Detention Center.

Mr. Xuan Huaiji of Xiaoshuiquan Village, Yimatu Township was arrested on the evening of June 17, 2020.

Mr. Zhang Yuanren, 88, and wife Ms. Fan Xiuying, 85, live in the Fifth District, Chuangyecheng. Their home was ransacked by several officers from the Chengfeng Police Department on the afternoon of June 11, 2020. Their Falun Gong books, calendars, and other personal belongings were confiscated.

Mr. Wu Shengjiang, 70, from Julu County, was arrested by officers from the Dicun Police Station on June 3, 2020 after someone reported him for distributing Falun Gong flyers. His home was ransacked the next day by officers led by Lu Dongli, head of the Julu Domestic Security Division. Mr. Wu is held at the Xingtai No. 1 Detention Center. The Julu Police Department issued a warrant for his arrest on June 17.

Ms. Zhang Xiuqin, in her 70s, lives in Zhangdian District. Her home was ransacked by six officers from the Mashang Police Station on June 15, 2020. The officers confiscated her Falun Gong books and a picture of Falun Gong's founder. They tried to take Ms. Zhang away, but were stopped by her family.

The same day, Mr. Zhang Wenlong and Ms. Xu Qiulan were harassed at home by officers from the Gongyuan Police Station and agents from the Neighborhood Committee. Ms. Xu was taken to the Hutian Town Brainwashing Center and held for a day.

Ms. Peng Xiaomei, in her 60s, an employee of Hunan Province Construction Bank, was arrested on June 14, 2020. Her home was ransacked. She is being held at a detention center.