(Minghui.org) Falun Dafa practitioners from Sweden held their regular activities at Mynttorget Square next to the Swedish Parliament (Riksdag) in central Stockholm on Saturday June 13, 2020. 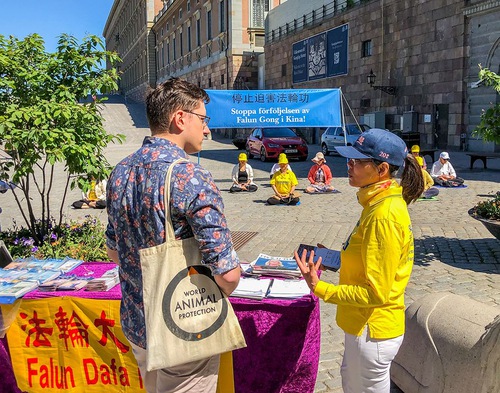 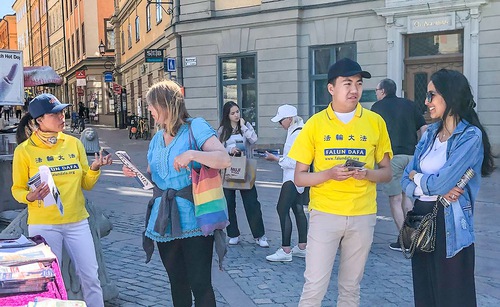 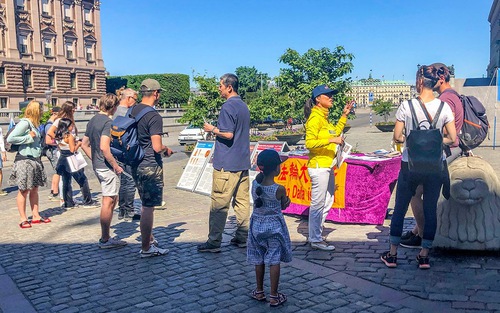 Practitioners talk to people about Falun Dafa and the ongoing persecution. 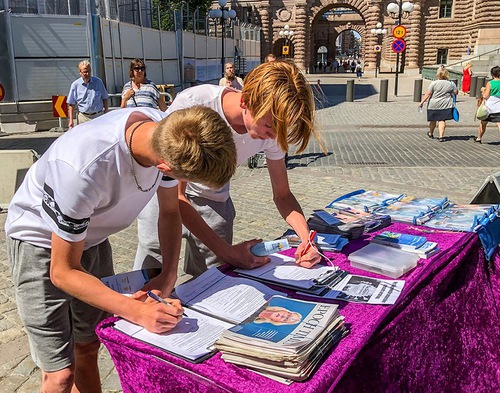 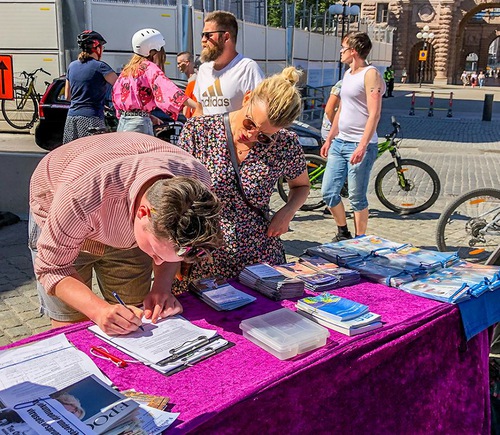 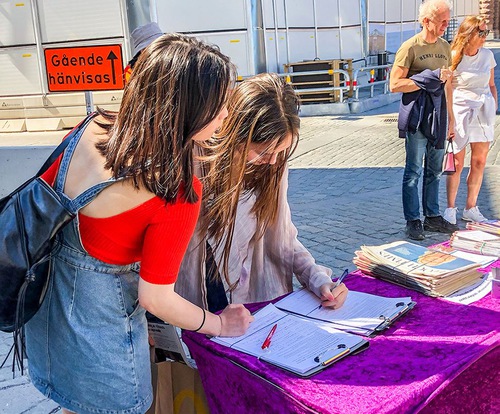 People show their support by signing a petition calling for an end to the persecution in China.

During the global coronavirus pandemic, the Swedes adopted a let nature take its course approach. There were no lockdowns or social distancing measures. Most people followed the government’s suggestion to stop the spread of the outbreak by going out less frequently.

During the summer, local residents love to go outdoors to bask in the sun. Because it was Saturday more people than usual were outside and walked past Mynttorget Square. Many stopped to take photos and quietly observe as the practitioners did the exercises. Some read the information display and went to the booth to sign the petition or chat with practitioners to learn more about the practice.

Ellena, a Swedish woman, stopped in front of the display board and read the information. She then walked up to a practitioner and asked to sign the petition. She said, “I don’t understand what practitioners have done wrong! I wanted to throw up when I read about the Chinese communist regime removing organs from prisoners of conscience and selling them for a profit. I feel terrible. People should live with dignity. The CCP has taken that right away. It’s abominable.” She also said that because of what’s happening in the world now, more people are aware that China wants to control everyone and dominate the world. She felt people shouldn’t let that happen.

A well dressed older woman came to the information booth to pick up brochures. She said, “I'm 83 this year. I have read a lot about Chinese history. The CCP has been killing people in one revolution after another.” She also revealed that she had visited China in 2003, and said, “Nearly every Chinese I came in contact with praised the CCP. I later learned that it was because no one can have a view differing from that of the CCP. I am therefore not surprised that Falun Dafa practitioners are being persecuted.” 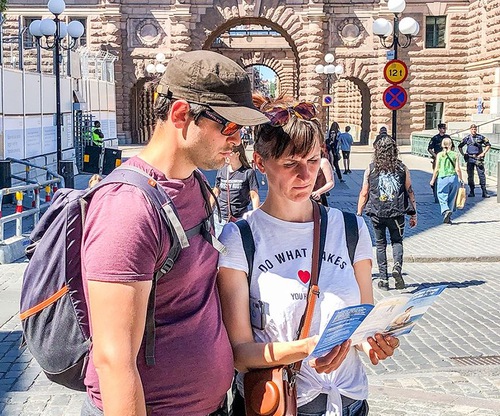 A young couple from Germany received a German language brochure. After they read the information they signed the petition.

A young couple from Germany was given information on Falun Dafa. After they read the brochure, the man said, “So much is happening in the world that I've become indifferent. However I was very shocked when I recently read in the Epoch Times about the persecution of Falun Dafa practitioners. I want to know more about the practice and organ harvesting.” The couple asked practitioners several questions. They decided to sign the petition to show their support and said they would pay attention to the issue in the future.

Several Swedish youths in their 20s also stopped to learn more about Falun Dafa. They expressed their horror after learning about the ongoing brutal tortures faced by practitioners in China simply because they follow the principles of Truthfulness-Compassion-Forbearance. They signed the petition to stop these atrocities.

“Sydney, Australia: a Meditation that Brings Peace and Happiness”