(Minghui.org) When 10,000 Falun Gong practitioners went to the Central Petition Office in Beijing to appeal for the right to practice their faith 21 years ago, none of them expected that their unprecedented, peaceful appeal would become an eternal moment in history. 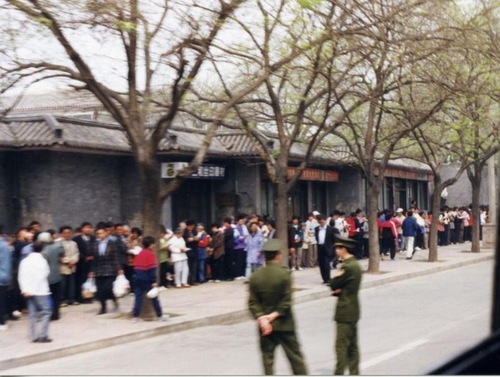 Historic photo of the April 25 Appeal

Background of the Largest Appeal in Chinese History

Since its public introduction in May 1992, Falun Gong soon became the most popular qigong practice in China. Its slow motion, meditative exercises and core principles of Truthfulness-Compassion-Forbearance helped many people regain their health and find inner peace.

Within seven years, an estimated 70 to 100 million Chinese, nearly ten percent of the population of China, took up Falun Gong.

While the Chinese Communist Party (CCP) promoted Falun Gong in the early years due to its positive effect on health and saving healthcare costs, its continuously rising popularity and revival of traditional culture eventually triggered the CCP to take action to eradicate it.

One month after the Propaganda Department published a defamatory article about Falun Gong in a state-run media in June 1996, the Chinese Publication Bureau banned the publication of Zhuan Falun, the main text of Falun Gong and one of the top ten bestsellers in Beijing.

In 1997, Luo Gan, the former secretary of the Political and Legal Affairs Committee that oversees China’s state security and judicial branches, ordered the secret police to investigate Falun Gong by pretending to be practitioners. Not only did none of the secret agents find any problems with Falun Gong, but many of them started to practice Falun Gong themselves after witnessing its benefits first-hand.

In the following year, media reports and articles slandering Falun Gong appeared one after another on TV and in the newspapers. Some TV stations corrected the reports at the practitioners’ request, and some didn’t.

Police also showed up at practice sites and sometimes dispersed the practitioners with water jets.

On April 11, 1999, He Zuoxiu, a physicist and relative of Luo Gan, published an article in a Tianjin magazine that slandered Falun Gong.

Between April 18 and 24, practitioners in Tianjin went to the magazine’s office to explain the facts about Falun Gong, only to have more than forty of them arrested.

The Peaceful Appeal Was Later Called a “Siege”

Mr. Xu Yin, a former associate professor at Tsinghua University and volunteer assistant at a Falun Gong practice site at the university, recounted how he heard about the arrests in Tianjin on April 24 and decided to go to the Central Petition Office the next day.

On the morning of April 25, he left home around 5 a.m. to take the morning bus. When he arrived at the destination an hour later, there weren’t many people on the street yet. By 7 a.m., more practitioners gradually showed up. Most of them didn’t know where to go to state their appeal, so they just stood on the street and waited.

Not far from them, police officers set up a police barricade for crowd control. By 8 a.m., hundreds of people had shown up at the intersection where Mr. Xu was standing.

To Xu's surprise, he saw the police unfasten the barricade at the north side of Fuyou Street, leading the practitioners toward the street. In the middle of Fuyou Street was the West Gate of Zhongnanhai, not the appeals office, which was in the opposite direction.

Under the direction of the police, the practitioners unknowingly “surrounded” Zhongnanhai, the central government’s headquarter, or Beijing’s “White House.”

The CCP later spread the narrative of the practitioners organizing the “siege” of Zhongnanhai and attempting to overthrow the government, and used that as one of the major reasons to unleash the persecution of Falun Gong three months later.

While standing on the street during the appeal, some practitioners noticed police cars driving up and down Fuyou Street, with officers taking videos of them. There were also plainclothes officers videotaping practitioners secretly or coming into the lines to listen to what the practitioners were talking about. 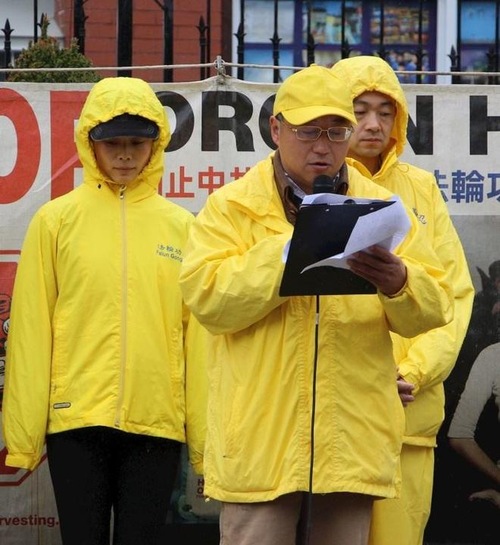 Mr. Bian Jianwu speaking at an event commemorating the April 25 Appeal in Toronto in 2018

Mr. Bian Jianwu, another practitioner who participated in the April 25 appeal, said, “We all knew what the communist regime could do to us after this. But I noticed that no practitioners lowered their head or turned aside when the officers took pictures or videotaped us.

“There was one practitioner who was in the military. He was in his 30s and stood on the front row of the line. I didn’t see any fear on his face when the police videotaped him again and again. Later in the day, his supervisor in the military showed up. He still stood there and didn’t leave.

“In the Chinese Communist Party’s military, there is zero tolerance for people having their own, independent thought. Not long after the appeal, this young man was discharged by the military and subjected to political investigation.”

Mr. Bian said two of his friends happened to see him in the appeal that day. They said they just couldn’t believe after the Tiananmen Massacre in 1989, there were still so many people who had the courage and integrity to face the tyranny and directly appeal to the central government at Zhongnanhai.

Practitioner Mr. Ge Zhonglai recounted, “By 5 or 6 p.m., many local residents came to us and said, ‘We know you are all good people. You should all go home. Don’t take the risk. The Chinese Communist Party could do anything. They’ve already dispatched the army. You don’t know when they will be coming at you.’”

Mr. Ge took a walk around and did see some military cars parking on the side. After he came back, he tried to persuade his wife to go back home first and he would stay there. His wife refused and said she would stay with everyone else. They stayed for a few more hours, until the then-prime minister talked to several practitioner representatives and agreed to look into the matter.

Before they left, there were people constantly coming and asking them to go home, for their own safety. “I guess people all know how evil the communist regime is,” Mr. Ge said.

While some practitioners already felt the intense atmosphere and signals from the authorities about the upcoming suppression, many practitioners were impressed and touched by the peace and righteous faith surrounding every practitioner present.

Young practitioners volunteered to replace the elderly in the front of the lines. They showed concern about each other, although they were all strangers.

All the practitioners just stood there quietly – no one shouted anything or acted violently. Some did the Falun Gong meditation and some read Zhuan Falun.

Seeing how peaceful the group was, even the police became relaxed and some offered water to the practitioners.

One police officer was very touched and said to people around him, “Look at this! This is virtue!”

On the night of April 25, Jiang Zemin, the then head of the CCP, wrote a letter to members of the Politburo, and announced his intention to persecute Falun Gong.

On July 20, 1999, Jiang formally ordered the persecution of Falun Gong and vowed to eradicate the practice from China in three months.

Since then on, Falun Gong practitioners have been subjected to arrest, detention, imprisonment, forced labor, and torture. Some have even been killed for their organs to fuel the lucrative transplant industry.

Now, twenty-one years have passed since the April 25 appeal. Falun Gong practitioners are still continuing their peaceful resistance against the persecution and revealing the CCP’s evil nature to the world.

No matter how long the persecution might continue, the spirit and faith of the April 25 Appeal will continue to inspire until the end.