Sweden: Falun Gong Practitioners Raise Awareness of the Persecution Amid the Coronavirus Pandemic

(Minghui.org) Falun Gong practitioners held activities at Mynttorget Square next to the Swedish Parliament (Riksdag) in central Stockholm on April 4, 2020, to raise awareness of the ongoing persecution in China.

Sweden has not yet implemented a mandatory lockdown to deal with the coronavirus, but the Swedish government is considering some emergency measures, including travel restrictions and limits on social gatherings. Despite no restrictions being officially in place, the number of people on Stockholm's streets has dropped in recent weeks.

Falun Gong practitioners regularly set up an information site next to the Swedish Parliament, and wanted to continue their efforts during the current pandemic. They used large banners that read, “Stop the Persecution of Falun Gong” and “Keep Away From the CCP Virus” to attract passersby. They also set up display boards with information about Falun Gong, the persecution in China, and the Wuhan virus.

The Chinese regime's deliberate coverup of the Wuhan virus clearly demonstrates the danger of cooperating with a corrupt, totalitarian regime. Falun Gong practitioners want good people everywhere to distance themselves from the Chinese Communist Party.

Though fewer people were out on the streets, many were still drawn to the Falun Gong information site. They stopped to learn about Falun Gong and understand why the CCP is brutally suppressing practitioners in China. 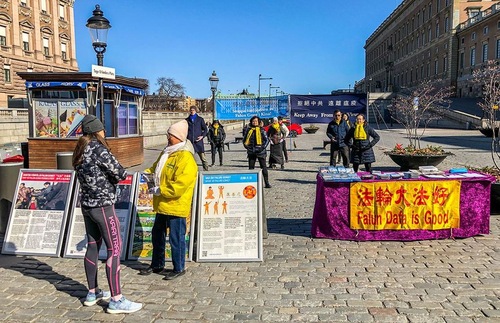 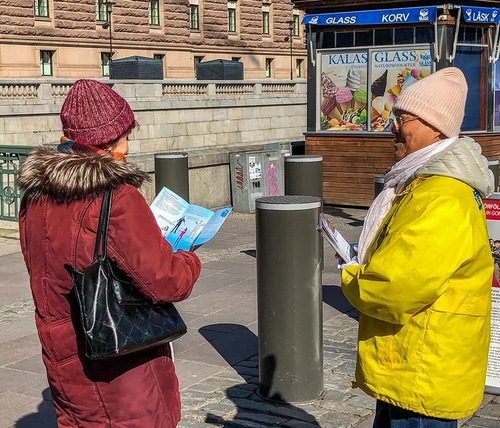 Practitioners talk to passersby about the practice and the atrocities taking place in China. 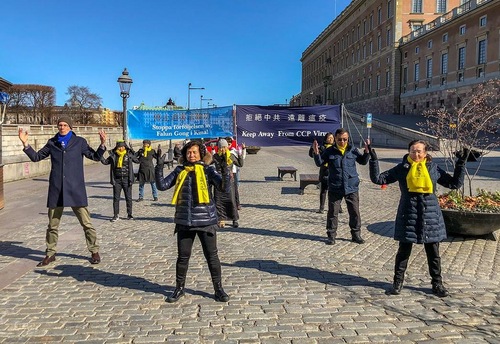 Maria, originally from Serbia, said she has lived in Sweden for a long time. She told practitioners that she was shocked to learn about the persecution of Falun Gong in China. She pointed at a graphic about the CCP's forced organ harvesting from practitioners, and said angrily, “They are harvesting organs and are responsible for the present pandemic. They have done so many bad deeds and killed so many people. They are too evil.”

She called on Chinese citizens to wake up and quickly take action to overthrow the CCP.

A Swedish woman stood quietly observing the practitioners who were performing the exercises. She said, “I usually feel very anxious, but I felt extremely comfortable while standing here. The music makes one relax. I love it.”

She told practitioners that she often sees them holding activities on the square. “The persecution has been going on for so long. It is not acceptable. I too want to learn this,” she said.

Swedish Man: “I Support You”

A middle-aged man in a wheelchair approached the information site. He told practitioners that he had traveled to China in 2008, and he heard about the regime's brutal suppression of Falun Gong many years ago. He said the persecution is unimaginable and brutal. He told practitioners earnestly, “I will always stand on your side and support you.”

Another man shot some video of the banners, of the practitioners talking to people about the persecution, and practitioners doing the exercises. He said he wanted to post some video on his social media account so that more people could hear about the terrible things done by the CCP. “You are doing an excellent job,” he said.