Australian MP: Those Who Stay Close to the Chinese Communist Party Are in Great Danger

(Minghui.org) “I have no problem with Chinese people, whether they be here or in their homeland. My issue is with the communist Chinese Government that lied, covered up and allowed the Wuhan virus to kill not just its own people but engulf the world,” wrote an Australian MP on his Facebook page on March 27, 2020. “Despite the best efforts of communist shills, my position is VERY clear: Chinese people - good; Chinese Government - bad. Anyone who says otherwise is a liar.”

This was the third post from Bernie Finn, Member of the Victorian Legislative Council, within one week that reprimanded the Chinese Communist Party (CCP) for the coronavirus pandemic. This post appeared three days after he was interviewed by a Minghui correspondent in Melbourne and explained that the international community should help to peacefully dismantle the CCP. 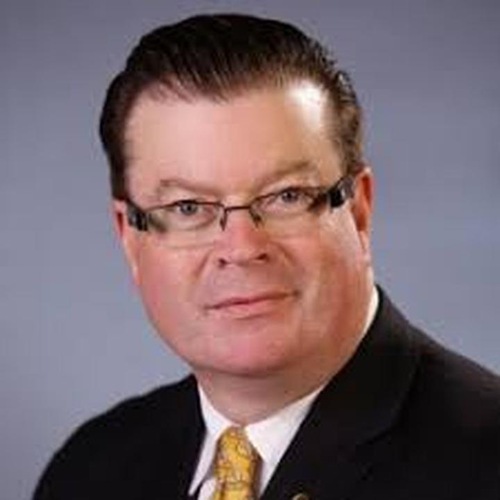 “We Should Never Believe or Trust It [the CCP] Again!”

“Well said. Something has to be done about it so the world will learn from it, and hopefully we don't have to learn it the hard way again like what we are going through now,” another person added.

“My opinion is the virus is still out there in China and the Chinese government is still covering up. I wonder whether international law covers lawsuit against another nation for damages caused by negligence!” wrote one post.

But there were also posts from pro-CCP agents with opinions similar to those published by the state-owned Xinhua News Agency. Other commenters were able to recognize them, however. “Criticizing the government does not mean criticizing the people. Learn the difference,” one person clarified.

Before the March 27 post, Finn made two posts voicing his opinion about the CCP's cover-up of the pandemic. On March 21, he posted the following message in white with a red background: “The communist regime in China is no friend of Australia. It’s really gone out of its way to prove that this time. We should never believe or trust it again!” 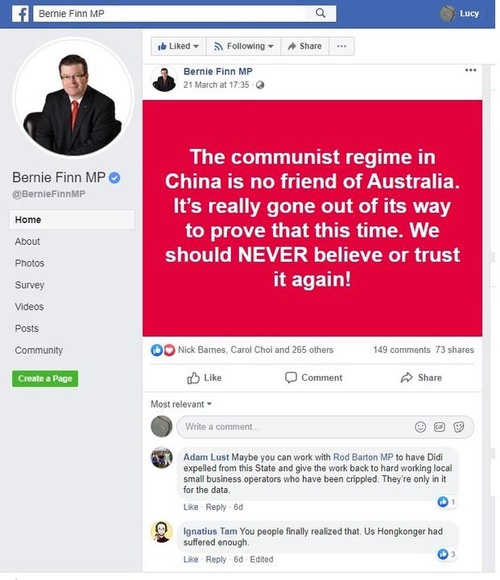 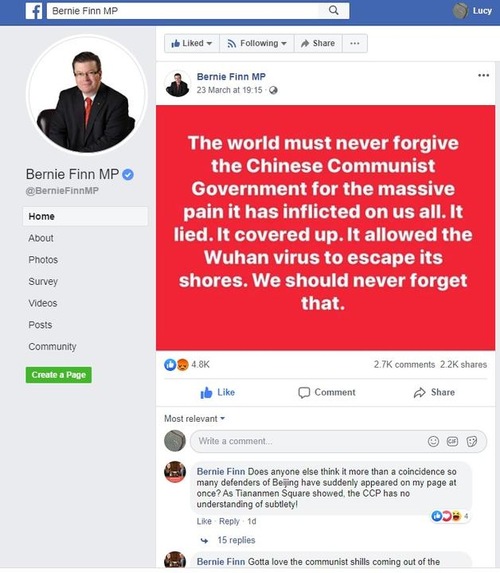 Two days later, he posted another message. “The world must never forgive the Chinese Communist Government for the massive pain it has inflicted on us all,” the message wrote. “It lied. It covered up. It allowed the Wuhan virus to escape its shores. We should never forget that.”

Within days, thousands of people shared Finn's March 23 post, and some left comments. “Thanks for speaking out the truth. Regardless of how the virus is imported into Australia, it is originated from Wuhan. We will never forget,” wrote one reply.

“And now, they do NOT count those asymptomatic virus carriers. These people are moving around the country again. Sooner or later, they could go out again and start a second wave...” another person wrote.

Seeing some pro-CCP posts bluntly attacking Finn for his post, one internet user was amused. “When there are so many CCP fans posting their comments here, it means you got it totally right!!!” she wrote.

Finn, who has served as an MP since 2006, was interviewed by a Minghui correspondent on March 24. He said that while some people call the pandemic the Wuhan Virus while others call it the CCP Virus, regardless of the name, the international community should know where it started, how it went out of control, and who should be responsible for it.

Finn emphasized that the CCP must be held accountable for causing the pandemic and made to pay for the resulting losses because its negligence and cover-up allowed the virus to spread and travel across borders to other countries.

He concurred that the term CCP Virus is very accurate and serves as a reminder of who should be responsible for the pandemic. He warned that any individual or business with close ties to the CCP is in great danger.

People should have been made aware of this, he added. He especially worries about Australia because many businesses in various industries have close partnerships with the CCP. He urges them to stay away from the CCP to avoid possible harm.

Finn said he would talk with other MPs, governors, and the prime minister about the danger of getting too close to the CCP whenever he gets a chance because the pandemic is an urgent public health issue.

Finn explained that Australian officials had learned in the past that the CCP is not trustworthy and that the pandemic this time has enabled the international community to see through the CCP's lies and deceit. He said that the CCP deserves to be treated as an “international pariah.”

Finn has also made it clear that no one should acknowledge the legitimacy of the CCP because what it has done during the pandemic, on top of the numerous crimes it committed in the past, has totally invalidated the value of its existence.

Upon hearing that 353 million Chinese had quit the CCP and its affiliated junior organizations such as the Communist Youth League and the Young Pioneers, Finn called on the international community to join the momentum of dismantling the CCP.

Many people have seen through the nature of the CCP from this pandemic and other incidents, he said. The best scenario is for everyone to join their efforts toward a China with freedom and respect for its people.