Once Tortured in a Labor Camp, Two Liaoning Women Sentenced to Prison for Their Faith

(Minghui.org) Two women in Fuxin City, Liaoning Province were recently sentenced to prison for practicing Falun Gong, an ancient mind-body improvement discipline that has been persecuted by the Chinese communist regime since 1999.

This wasn’t the first time that both women have been persecuted for their faith. Prior to their latest prison term, they were given forced labor, and were tortured, at the notorious Masanjia Forced Labor Camp.

Ms. Wang Jinfeng and Ms. Bian Chunyan, both 56, were arrested on November 7, 2018. They escaped hours later and went into hiding for the months that followed.

A third practitioner, Ms. Zhang Yuhong, who was arrested along with them, was kept in detention and sentenced to four years in prison in July 2019 by the Taiping District Court.

All three practitioners' parents, who were in their 70s and 80s, relied heavily on them to provide care. Their arrests and persecution caused tremendous distress to their families.

While Ms. Wang and Ms. Bian were on the run, the police ransacked the home of Ms. Wang’s elderly mother in her 70s, and confiscated her younger brother’s electric motorcycle. Ms. Bian’s older brother and bedridden mother in her 80s were also harassed.

Both women were arrested again on August 9, 2019 after being tracked by the police. Ms. Wang’s sister-in-law, younger brother, and nephew were held at the police station for one day and interrogated.

Ms. Wang and Ms. Bian were transferred to Xindi Detention Center. The police beat Ms. Wang while interrogating her.

Because they hold firm to their faith, Ms. Wang and Ms. Bian have been repeatedly persecuted during the past 20 years.

Ms. Wang was detained at Masanjia Forced Labor Camp between May 23, 2002 and July 2, 2005. She was deprived of sleep, shocked with electric batons, and subjected to other forms of physical abuse, including freezing, waterboarding, and forced feeding.

She was arrested again only three years after being released, and given another two years at the Masanjia Labor Camp in 2008.

On March 10, 2008, five days after she was sent to the labor camp, two guards pushed her into a warehouse. She struggled and shouted “Falun Dafa is good.” Guard Zhang Jun taped her mouth shut and handcuffed her. 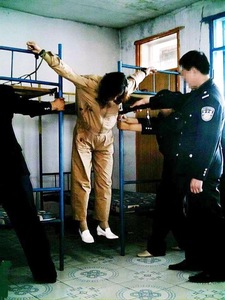 The guards then tied her legs and hung her up by her handcuffed wrists. With her body hanging in the air, the handcuffs cut into the flesh and she experienced excruciating pain in her arms and wrists.

Because Ms. Wang was unable to perform forced labor due to injuries in her arms, the guards slapped her face more than twenty times.

The guards also slapped her face for a long time on January 20, 2009 when she shouted “Falun Dafa is good” during a Chinese New Year celebration. She lost a few of her lower teeth as a result.

Ms. Bian, a former employee of the Fuxin City Glass Factory, was given two years of forced labor in October 2000 for appealing for the right to practice Falun Gong at Tiananmen Square.

She was arrested again on August 31, 2011 and given one year and nine months of forced labor on September 28, 2011. She was also subjected to various forms of abuse while serving both terms at Masanjia Forced Labor Camp.

Two Liaoning Women On Trial for Their Faith

“Fellow Practitioners, Have You Woken Up Yet?”