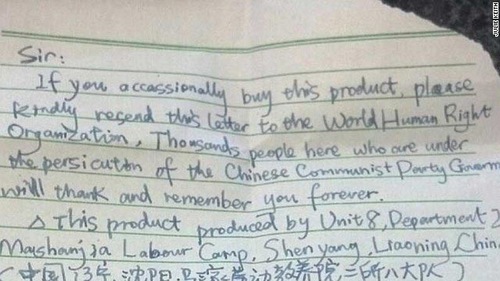 The SOS letter found in a package of Halloween decorations

CNN featured the story on its homepage on November 6. This time, the author of the SOS letter, Mr. Zhang, a Falun Gong practitioner, was identified and interviewed in Beijing.

The letter first made international headlines in December 2012, when Ms. Julie Keith of Oregon posted it on her Facebook page. This resulted a front page article in a local Oregonian newspaper. Ms. Keith discovered the SOS letter in a package of Halloween decorations, revealing the origin of the decorations and crying for help. Many major media outlets including the New York Times carried the story.

As a result of the SOS letter, Masanjia, the notorious forced labor camp in China, became known to a large number of Americans. The brutal labor camp system in China became vividly real rather than just a remote concept or vague bit of information filed away in people's minds.

Ms. Wang Chunying, a Falun Gong practitioner now living in the Washington DC metropolitan area, was detained at Masanjia Labor Camp twice, for a total of over five years. 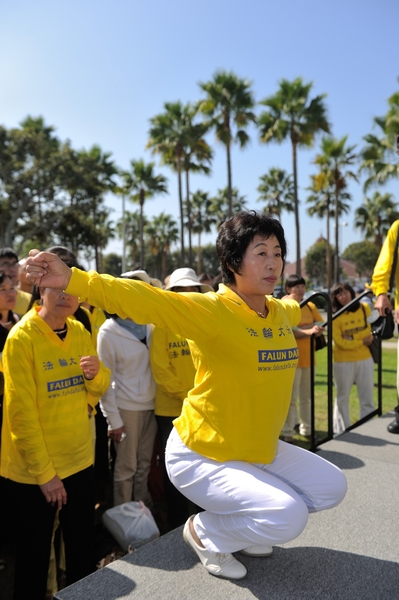 Ms. Wang Chunying demonstrates the tortures that she endured at Masanjia Forced Labor Camp at a recent rally in Long Beach, California.

Upon hearing the story of Mr. Zhang, the author of the SOS letter, Ms. Wang recalled her own suffering at Masanjia:

“When I was imprisoned in Masanjia in 2002 and 2005, I was kept in a small room with many people. The room was filled over capacity. About 26 people were detained in the room full of bunk beds adjacent to one another. The labor camp guards put three people on two parallel beds. Some had to sleep in the space between the two beds. I was one of them. I couldn't sleep well at all.” said Ms. Wang.

“Unlike regular inmates, Falun Gong practitioners didn't have a workshop to go to to do the forced labor. Instead, the room that we were detained in was used as our bedroom, workshop, and storage room. We were forced to make plastic flower arrangements for export. The glue used in the process was highly toxic. We were forced to line up on two sides of paper boxes and work on the products.

“We were not allowed to speak to one another. We had to work 11 hours each day and often overtime if the order was not fulfilled quickly enough. On top of the high intensity labor, there was constant broadcast in the room of brainwashing information slandering Falun Gong.

“The products were kept at a corner of the room. The air in the room was full of the poisonous smell of the glue. Many of us were allergic to the toxic glue. Some practitioners' skin developed bruises as a result. I coughed severely and even coughed up blood occasionally.”

Forced labor is merely one way that the Chinese Communist Party (CCP) adopts to force Falun Gong practitioners to renounce their belief.

Mr. Zhang, the author of the SOS letter, was detained two and a half years in the labor camp. In his CNN interview, he described the slave labor at Masanjia as “an escape from the horrible violence.” Masanjia Labor Camp is notorious for the tortures it uses on Falun Gong practitioners.

Ms. Wang Chunying was once handcuffed between two bunk beds for 16 hours. The camp guards increased her pain by kicking the beds apart and tightening the handcuffs, which already cut into her skin. 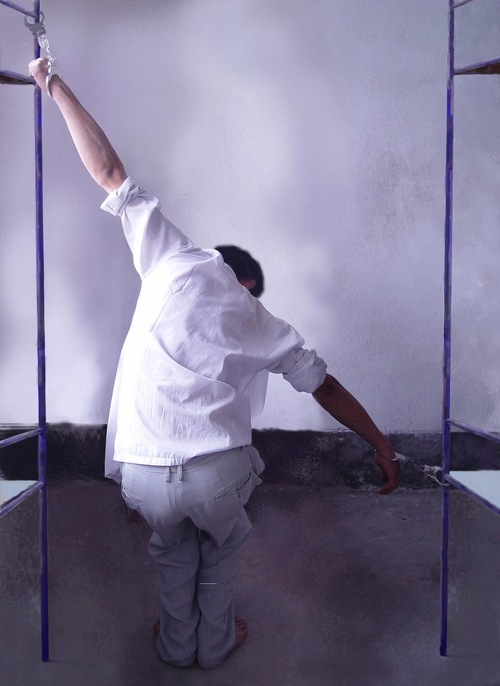 “I could neither stand nor squat down. My hands were handcuffed very tightly. Even though it was very cold in winter in Shenyang City, around 17 to 18 degrees below 0 Celsius (approximately 32F), I was in so much pain that I was sweating profusely. My hands soon became swollen and bruised.

“They tried to force me to sign a guarantee statement (not to practice Falun Gong), but I refused, so the torture continued. They didn't allow me to eat, drink, or use the restroom. I was stretched like this for 16 hours. There were cuts in about a dozen places on my body, including my wrists, which were covered with scabs.”

The stretching torture is also used with a single bunk bed. Ms. Wang was also subjected to a similar torture as the one illustrated below. 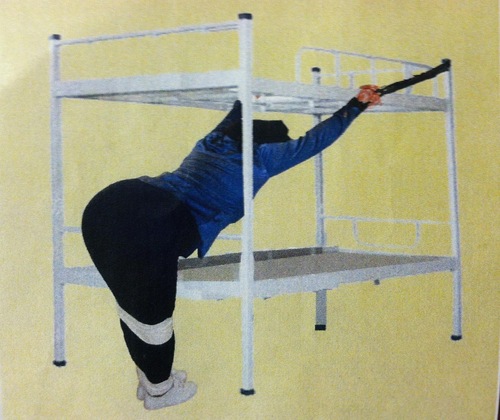 Torture at Masanjia: Stretching torture with one bunk bed

When the torture of stretching is coupled with sexual abuse, the humiliation, pain, and suffering of the victim is overwhelming.

Mr. Niu Jinping, a Falun Gong practitioner from Beijing, exposed the persecution of his wife Ms. Zhang Lianying, to the International community on May 21, 2006, when he spoke to European Parliament Vice President Mr. Edward McMillan-Scott. Mr. McMillan-Scott had come to China to investigate the persecution of Falun Gong. In 2008, Ms. Zhang Lianying was arrested again, and held at Masanjia Labor Camp.

Ms. Zhang later recounted the torture she was subjected to: "Because of my persistence in my belief in Falun Gong, I was subjected to a stretching torture for more than twenty times. The stretching and hanging by handcuffs didn't stop until a few days later. My clothes were soaked in sweat, and my hair fell out due to the long-term painful torture.

"Sometimes my clothes were torn apart, and I was hung semi-naked. The head of the 'Special Monitoring Team' pulled my nipples, and she beat me with a wooden board until I passed out. A camp guard surnamed Pan was videotaping me and said, 'I am taping you naked. I'll send the footage over to the Minghui website, so everyone can see it.'”

In October 2013, Minghui.org published a personal account from Ms. Yin Liping, who suffered severe sexual abuse at Masanjia: “I Still Tremble When I Think About It – I Was Locked Up In a Men's Cell at Masanjia Forced Labor Camp.”

Ms. Cai Guoxian from Songyuan City in Jilin Province was detained in Jilin Women's Labor Camp. She recalled how the camp head yelled at her: “We have 108 types of torture methods! Do you think you can leave here alive?”