(Minghui.org) Falun Gong practitioners have been holding activities at various tourist attractions in Paris since the start of the New Year to introduce the meditation practice to overseas visitors. The number of tourists from China has gradually decreased due to travel restrictions put in place following the coronavirus outbreak. But Chinese tourist who have learned about Falun Gong while in Paris have expressed their gratitude to practitioners for showing concern for mainland Chinese at this critical time.

Ms. Chen is a Falun Gong practitioner who goes to the Galeries Lafayette shopping mall in Paris every day to talk to Chinese tourists about the persecution of Falun Gong in China.

She recently encountered a group of tourists who projected hostility toward Falun Gong. She said to them, “During these times, people from China need even more care and understanding, and even more so, they need to keep safe.” The tourists were surprised by her words and changed their attitude. She then went on to tell the group how the Communist regime has been continuous killing people throughout the 70 years since it seized power in China. From framing Falun Gong through the Tiananmen Square self immolation and murdering Falun Gong practitioners for their organs, and now it is covering up the severity of the coronavirus outbreak.

“The Party's true motive is to destroy people, to harm people,” Ms. Chen said. “If you don't quit the Party, you are the same as the Party. Only those who abandon the Party are good people, and Buddhas and Gods will protect and bless you.” After hearing Ms Chen's words, the entire group of approximately two dozen tourists decided the quit the Chinese Communist Party, the Communist Youth League and the Young Pioneers.

Ms. Chen also told the group to remember the words, “Falun Dafa is good,” and “Truthfulness-Compassion-Forbearance is good.” She told them that should they ever face life-threatening danger, if they can sincerely recite these nine words, then misfortune can turn into blessings. She told them to also pass these words on to their friends and family members. The tourists within the group nodded, and several could be heard saying, “I will.”

One young person in the group remarked, “There are more than a billion people in China and so far only 350 million have quit [the communist organizations]. You still have a long way to go to reach your goal.”

Ms. Chen replied, “You can also play your part. You understand the truth now. You can talk to your friends and relatives and tell them what Falun Gong is really about, and teach them to recite 'Falun Dafa is good; Truthfulness-Compassion-Forbearance is good.' You also have a long way to go; you also have this responsibility.”

Voices of Support from Visitors at the Eiffel Tower 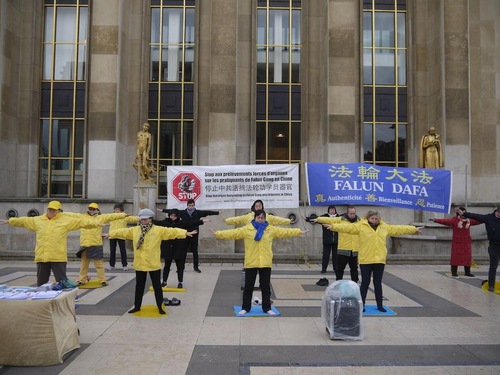 Practitioners demonstrate the exercises at Human Rights Square near the Eiffel Tower.

Georges Giraud, a French teacher, said that the persecution of Falun Gong is similar to the crimes of Hitler and Stalin. He praised the principles of Falun Gong – Truthfulness-Compassion-Forbearance, and said “These are perfect and universal values.”

Sandrine manages a clothing export company. She worked in China from 1995 to 1998 and personally witnessed the popularity of Falun Gong at that time. Back then, Falun Gong practitioners could be seen everywhere, practicing their exercises freely.

“I am totally stunned,” she said. “I have not heard anything about the persecution of Falun Gong. Not on TV, not in the newspapers, it is like this topic has been covered up. It is such a pity. This topic definitely needs to be brought up more. The persecution is totally unacceptable.”

A group of people from Lyon, after learning about the organ harvesting of Falun Gong (and other) prisoners of conscience, signed the petition calling for a stop to the persecution. One of the younger people in the group exclaimed, “This persecution is terrifying. It's no wonder the Wuhan coronavirus has happened.”

Abutalib, from Tajikistan, teaches the Tajik language at a local university. He said, “The Communist regime is bad. I stand on your side.”

“A Banner Gets Woman Five Years in Prison”