Why Did the Plagues of Ancient Rome Suddenly Disappear?

After Rome's suppression of Christians, however, this powerful empire went downhill. Stricken by three major plagues, the Western Roman Empire ended in 476. The fourth disaster, the Plague of Justinian (541-542) killed another 25-50 million people, further weakening the empire.

The most notorious attack against Christians came from Emperor Nero between 64 and 65 AD. Nero, who became emperor at 54 AD, killed his mother, brother, and two wives. Numerous historians have documented that, in order to renovate and expand Rome, Nero set fire to the city on July 18, in 64 AD and blamed Christians for the arson. “Nobody dared fight the flames. Attempts to do so were prevented by menacing gangs. Torches, too, were openly thrown in, by men crying that they acted under orders,” wrote historian Tacitus in The Annals.

After labeling Christians a cult and a danger to society, Nero mobilized the Roman public to persecute them. As a result, many Christians were killed – torn apart by beasts or burned alive as human torches.

“In their very deaths they were made the subjects of sport: for they were covered with the hides of wild beasts, and worried to death by dogs, or nailed to crosses, or set fire to, and when the day waned, burned to serve for the evening lights,” wrote Tacitus.

Many people who followed Nero and persecuted Christians soon received retribution. A plague broke out the following autumn in Rome, killing some 30,000 people. Three years later, a rebellion against Nero took place. He fled Rome in AD 68 and died, possibly by suicide.

After Nero, about 10 Roman emperors continued to suppress Christians. Additional plagues followed, including the Antonine Plague (165-180), the Plague of Cyprian (250-270), and the Plague of Justinian (541-542).

The plagues were devastating and terrifying. “As the strength of the body is dissolved, the bowels dissipate in a flow; a fire that begins in the inmost depths burns up into wounds in the throat... the intestines are shaken with continuous vomiting ... the eyes are set on fire from the force of the blood ... as weakness prevails through the failures and losses of the bodies, the gait is crippled or the hearing is blocked or the vision is blinded ...” wrote Cyprian, Carthaginian bishop and eyewitness for whom the plague is named. 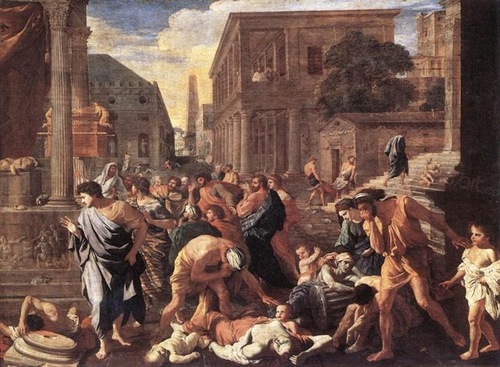 A plague depicted by Nicolas Poussin

John of Ephesus, a bishop and eyewitness of the Justinian Plague in the Eastern Empire, described it in Part 2 of his Chronicle:

—over corpses which split open and rotted on the streets with nobody to bury (them);—over others who perished falling in the streets to become a terrible and shocking spectacle for those who saw them, as their bellies were swollen and their mouths wide open, throwing up pus like torrents, their eyes inflamed and their hands stretched out upward, and (over) the corpses rotting and lying on comers and streets and in the porches of courtyards and in churches and martyria and everywhere, with nobody to bury (them);—over ships in the midst of the sea whose sailors were suddenly attacked by (God’s) wrath and (the ships) became tombs for their captains and they continued adrift on the waves carrying the corpses of their owners;—over highways which became deserted;—over villages whose inhabitants perished all together;—over many things of this kind, which defeat all who have the power of speech in (their skill with) words and stories.

Repentance and End of the Plague

By 680, people awakened and began to reflect on the cruelty against Christians as well as the general moral decay of society. In 680, Roman citizens carried the bones of Saint Sebastian (256 – 288, killed during the persecution by Diocletian) and processed through the streets. As people repented of their wrongdoings, the plague miraculously vanished in Rome.

People in other areas of the empire heard about this and followed their example, asking for the bones of Saint Sebastian to offer repentance. When a plague broke out in Venice in 1575, about 50,000 people died; similarly, a plague occurred in Lisbon in 1599. In both cases, people marched with the bones of holy people in repentance and the plagues ended.

About 2,000 years have passed since the religious suppressions of the Roman Empire, and another massive persecution of belief has been taking place in modern China. The target this time is Falun Dafa, also known as Falun Gong, a meditation system based on the principles of Truthfulness-Compassion-Forbearance.

Like Nero, former Chinese Communist Party (CCP) leader Jiang Zemin launched the persecution of Falun Dafa ten years after he came to power. Unlike Nero, however, Jiang and the CCP have accumulated an arsenal of tactics through the Party's political campaigns of previous decades. Armed with nationwide government-controlled news media, since July 1999 Jiang and his followers have blanketed the country with unprecedented hate propaganda.

One example is Focus, a popular CCTV prime time program about current affairs. According to a 2013 report published by the World Organization to Investigate the Persecution of Falun Gong (WOIPFG), Focus produced 39 anti-Falun Gong episodes between July and December 1999 alone.

Jiang vowed to eliminate Falun Dafa within three months. To achieve that, he issued a policy against Falun Dafa practitioners through the extensive 610 Office system: “ruin their reputation, bankrupt them financially, and eliminate them physically.” As public support waned and the intensive persecution lost its momentum in 2000, a self-immolation incident took place on Tiananmen Square on January 23, 2001, the eve of the Chinese New Year.

Two hours after the incident, the state-run Xinhua News Agency reported on its English worldwide channel, claiming that five Falun Dafa practitioners had set themselves on fire on Tiananmen Square. Stunned by the dazzling speed of such a report (it is usually days before the CCP releases a major news story such as this one), a reporter from Voice of America (VOA) contacted both the Public Security Ministry and Beijing Police Department for more information. But neither of these two agencies was aware of it. Massive propaganda nonetheless followed to propagate this story through almost all information channels in China, creating a nationwide blanket of brainwashing.

Philip Pan of the Washington Post reported on February 4, 2001, that Liu Chunling, one of the people involved in the self-immolation incident, was known by her neighbors for not behaving like a Falun Gong practitioner and that no one ever saw her practice Falun Gong.

The International Education Development (IED) condemned the persecution of Falun Gong practitioners in China and referred to it as “state terrorism.” “We have obtained a video of that incident [the self-immolation incident] that in our view proves that this event was staged by the government. We have copies of that video available for distribution,” said a statement from IED to the United Nations on August 14, 2001.

False Fire: China's Tragic New Standard in State Deception, a documentary produced by NTD Television that showed how the self-immolation was staged, won a Certificate of Honorable Mention at the 51st Columbus International Film & Video Festival.

But inside China, a large number of Chinese people were turned against Falun Dafa and the principles of Truthfulness-Compassion-Forbearance as a result of the self-immolation incident and the massive propaganda campaign that followed.

Although the CCP leaders have changed several times since July 1999, the persecution has continued throughout the past 20 years. From the Central CCP Committee to local governments, from military forces to civilian agencies, all have been carrying out the policy to arrest, detain, imprison, torture, and brainwash practitioners.

According to the Minghui website, more than 4,300 practitioners are confirmed to have died as a result of the persecution over the past two decades. However, due to information censorship and the ongoing persecution, the actual number is expected to be much higher.

Mounting evidence tells a terrible tale of murder and mutilation in China. Witnesses and Chinese physicians have revealed that a large number of Falun Gong practitioners have been killed for their organs, which are sold for enormous profit in transplant surgeries. Former Canadian MP David Kilgour and human rights lawyer David Matas, who investigated and revealed the atrocity, called it “a new kind of evil that has never been seen on this Earth.”

How to remain safe in this world of uncertainty? If history is any indication, we may take a cue from the Roman Empire that saw the ravaging plagues stop after they repented of their persecution of Christians. We believe that supporting Falun Dafa practitioners' constitutional right to freedom of belief will bring blessings.

“Belated News: Shandong Woman Recounts Arrest and Torture 20 Years Ago for Her Faith”