German Practitioner: Falun Dafa Allows Me to Return to My True Self

(Minghui.org) Every weekend, rain or shine since 2003, Birgit, a German Falun Dafa practitioner, has been talking to Chinese tourists about Falun Dafa at Cologne Cathedral and helping them quit the communist organizations. Her compassionate words, kindness, and sincerity have touched the hearts of many Chinese. 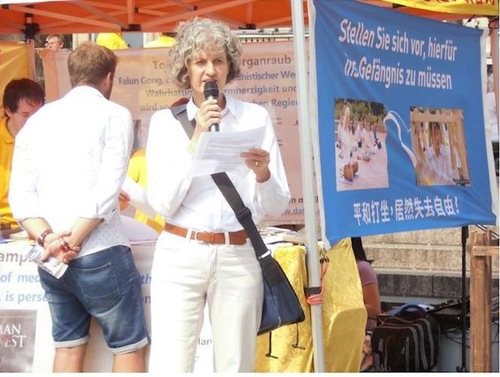 From a Sickly, Depressed Girl to a Healthy Falun Dafa Practitioner

Twenty years ago, Falun Dafa renewed Birgit’s life and allowed her to find her true self. She grew up in fear of her mother, who sternly punished her for her mistakes. When she was older, her mother would refuse to talk to her for days. Birgit tried her best to hide in her room to stay away from “danger.” As a teenager, she realized that her shy personality had made her life difficult. She was very nervous when she had to speak in front of others and was frequently depressed.

When she was 25, Birgit’s health began to decline. She repeatedly had bouts of suppurative tonsillitis and allergic asthma. Severe coughing kept her awake all night.

One night, Birgit woke up with unbearable itchiness. Her skin was covered in a rash, her face was horribly swollen, and her eyes were swollen shut. Her doctor said she had angioedema, which could be life-threatening. The side effects of the prescribed drugs terrified her. She thought she was going to die young.

Birgit tried everything, including expensive supplements, natural therapies, herbal medicine, and spiritual practice. Nothing worked. Instead she felt weak and lost.

In the summer of 2001, Birgit read a short article in a magazine about the Chinese Communist Party’s (CCP) persecution of Falun Dafa. She couldn’t understand why such a peaceful practice was being singled out for persecution, but the practitioners’ resilience deeply impressed her. “I immediately wanted to learn more about Falun Dafa,” she recalled.

Birgit thought that she'd have to travel to China to learn about Falun Dafa, but one day in downtown Cologne she saw a banner that read, “Falun Dafa.” She couldn’t believe her eyes. She went over and listened to a practitioner’s introduction. She was thrilled to know that she could learn how to practice in her own city. At that time her health was quickly getting worse.

Birgit contacted a couple who both practiced Falun Dafa and they invited her to their home. When the wife asked Birgit, “Would you like to return to your true self?” Birgit was moved to tears. She explained, “Her question touched my heart. It was exactly what I had been trying to do. I couldn’t help but cry.”

They watched videos of Master Li Hongzhi’s lectures from 1994. Birgit said, “I was so impressed with what Master said and with his compassion. I immediately felt that this was what I had been looking for. From the very bottom of my heart, I longed for a life that followed [the principles of] Truthfulness-Compassion-Forbearance!”

Birgit began to do the Falun Dafa exercises and read the books. She noticed that she felt stronger and no longer felt drained after work. Her asthma disappeared. Next, her other allergy symptoms lessened and eventually disappeared. She also became more outgoing even though she was still shy. It was no longer that difficult for her to talk in front of people.

“I’m so happy to have found Falun Dafa. It’s a miracle! Dafa has given me a new life. I’m filled with gratitude!” Birgit said.

In 2003, Birgit and her husband joined other practitioners to clarify the facts about Falun Dafa to tourists in front of Cologne Cathedral. She couldn’t wait to tell everyone she met about the benefits of this spiritual practice, and she especially wanted to tell Chinese people: “Falun Dafa is great! The persecution shouldn’t be happening.”

During the early years of the persecution, most Chinese tourists were too afraid of the CCP to listen to practitioners. Birgit wished she could openly talk to them, but their avoidance and her introverted personality were serious obstacles. Though the words were at the tip of her tongue, Birgit could only quietly say in a timid voice, “Do you know Falun Dafa has been persecuted? Please help us stop it.” She could hardly hear herself.

Birgit and her husband spent a week clarifying the facts in Manhattan, New York, in the summer of 2004. Facing crowds of people hurrying to work, Birgit stood, flyer in hand, repeatedly saying, “Hello, I'd like to tell you...” Busy professionals breezed past her. Birgit had to shake off her shyness. She did her best to finish a couple of sentences as pedestrians walked right by her. For eight hours a day with only an oatmeal bar as lunch, Birgit and her husband repeatedly greeted New Yorkers as they rushed past them.

She felt like her body was falling apart when she got up on the fourth morning. “Let’s skip today,” she begged her husband. Her husband calmly and firmly replied, “Let’s go. We're here to clarify the truth.” For all seven days of their vacation, they talked to people about Falun Dafa in Manhattan.

After Birgit returned to Cologne, her slower-paced town, she suddenly felt it was easy to greet the local residents and tourists. Chinese tourists rarely ran away from a kind German woman and even trusted her as a good source of information.

One day, Birgit greeted a Chinese tourist who looked nervous. Birgit smiled and waited for his reply. The man took a look at Birgit and looked around. After making sure no one was paying any attention to them, he quietly asked, “Could we go someplace where we won’t be monitored?” Birgit exclaimed, “Sure!”

They stepped into a nearby coffee shop. He asked many questions like, “Why do you practice Falun Dafa? How did you learn it? How did Falun Dafa change your life? How long did it take for you to become healthy...” Birgit answered every question. The young man said, “I've had these questions for a long time. Thank you for answering them!”

Before, because of her shyness, Birgit never thought she would be able to have such a great conversation with a complete stranger.

Every time she sees a Chinese person, Birgit remembers: “Master has told us many times to save the Chinese people. Most of the people in China have suffered in some way due to the Communist Party’s persecution of Falun Dafa. They're overwhelmed by the Communist Party’s lies. The young people who've grown up in that climate don't know anything else and their morals have been deliberately perverted.” Birgit deeply feels Master’s compassion and sympathy for the Chinese. She often tells Chinese tourists, “The Chinese are good people and should have a bright future.” She reminds herself, “Chinese people should be saved. They can’t be buried with the CCP.”

One time, Birgit told a Chinese woman at the train station about the CCP’s persecution of Falun Dafa. The woman listened to Birgit, although she didn’t have much time before her train was to depart. She told Birgit that her family suffered during the Cultural Revolution and some were killed. Though she had to tell her story briefly, she wept. Birgit was pained and saddened and told her, “The harm the Chinese people have suffered is by far beyond this. I have learned a lot from the experiences of Falun Dafa practitioners who have been tortured by the CCP.”

Birgit is very considerate of Chinese tourists’ fear of retaliation by the CCP. She usually approaches them calmly, gives them a flyer, and says, “Hello.” If they make eye contact, Birgit smiles and says, “China is a great nation, and the Chinese people deserve a bright future.”

As practitioners persistently clarify the truth to Chinese tourists, more and more Chinese people have the courage to stop and chat with practitioners.

One young Chinese man stood some distance from the Falun Dafa information booth and observed for a long time. He finally approached the booth. He stood in front of a banner and read the information about how practitioners are tortured in China. Birgit quietly approached him. When he turned to her, Birgit said sincerely, “I treasure China. Falun Dafa has saved my life.” The man listened quietly.

Birgit continued, “The CCP is still persecuting practitioners and even harvests their organs for profit.”

The man replied, “The CCP is very wicked. Everything you practitioners say is true!”

Birgit told him the history of the CCP’s numerous crimes and gave him a card about how to break through the Internet censorship. The young man put the card in his pocket and thanked Birgit, but he didn’t leave. Birgit realized that he wanted to quit the Communist organizations. She handed him a form for quitting the three Communist organizations. He filled it out, thanked Birgit, and left.

Birgit knows the Chinese people long for the truth. She hopes they won’t continue to believe in the CCP’s lies and that they learn the truth about Falun Dafa and the persecution.

“A Neighborhood Committee Administrator Gets Around the Communist Regime's Information Censorship”