(Minghui.org) The Chinese Communist Party's (CCP) coronavirus broke out in Wuhan in late 2019 and then spread to nearly 200 countries around the world. Taiwan's citizens have been wary of the CCP’s infiltration for decades, and so took many precautions when news broke about the CCP virus. Taiwan has thus been one of the least infected areas in the world.

The Chiayi City International Band Festival took place as usual on December 19, 2020, and the Tian Guo Marching Band was invited to participate in the event for the 10th time. The band's performance was warmly applauded along the entire parade route.

The international band festival was launched in 1993, and this year attracted more than 50 performing groups. Led by the 200-member Tian Guo Marching Band, the parade covered a route of nearly three kilometers (or just over two miles). Many people said the band and its conductor were the best. People were happy to introduce Falun Dafa to the community through the band, along with the principles of Truthfulness-Compassion-Forbearance.

The band members dressed in traditional costumes and played “Falun Dafa Is Good,” “Fa Rectifies Heaven and Earth,” “Gao Shan Qing,” along with other music throughout the parade. 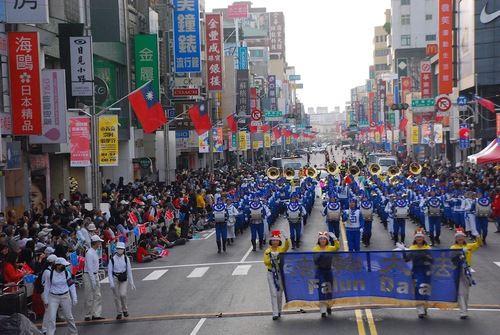 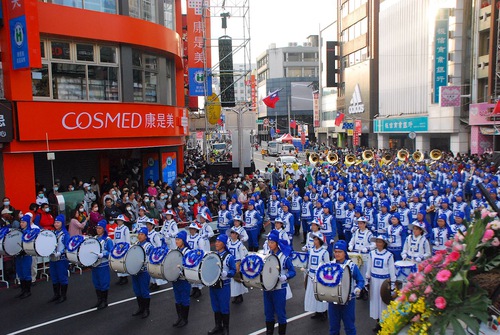 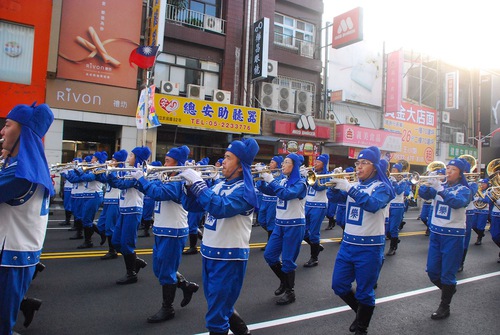 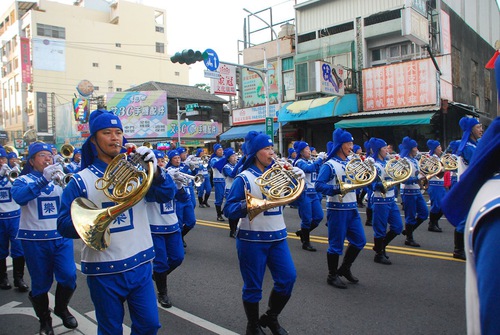 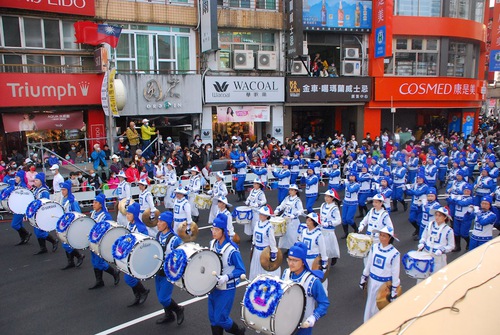 The Tian Guo Marching Band during the Chiayi International Band Festival on December 19, 2020

Two college students Tsai and Chen grew up in Chiayi and both had participated in the parade when they were in high school. Tsai played the snare drum while Chen was a director. Having heard the Tian Guo Marching Band previously, Chen said he was impressed by the grand layout and outstanding costumes. “Everyone, including the relatively elderly members who carry heavy instruments, is very energetic with synchronized marching steps,” he remarked, “The music is also special, beautiful, and pleasant.”

One woman also named Tsai came to watch the parade with her grandchild. She has some friends who are Falun Dafa practitioners, so she was happy to see the Tian Guo Marching Band in the parade. “Everyone looks so great and heavenly maidens are wonderful too!” she said.

One student from the Southern Taiwan University of Science and Technology said one of his friends practices Falun Dafa and he is a nice person. The student said the band was unique and magnificent.

Photographer Hsiao knew the band members were Falun Dafa practitioners and that they come here every year. “The music they perform is very righteous and very pure. It brings the sincerity and benevolence of cultivators' inner hearts to society.”

Hsieh and his wife agreed. He said the music is soothing and benefits anyone who hears it.

One band member said Falun Dafa practitioners require themselves to be honest, selfless, and considerate of others in their daily lives. She said that is why this meditation system spread to more than 100 countries, and why the book containing the main teachings of the practice, Zhuan Falun, has been translated into more than 40 languages.

Another band member said Falun Dafa was introduced to Taiwan in 1995 and Mr. Li Hongzhi, founder of the practice, came to Taiwan in November 1997 to give lectures. Despite the intense suppression in mainland China since 1999, there are hundreds of thousands of practitioners in Taiwan right now. The practitioners in Taiwan come from all walks of life, and they have regained health and found a spiritual path that helps both themselves and society.

“Young Dafa Disciple: I Regained My Hearing In My Right Ear by Firmly Believing in Master and the Fa”