(Minghui.org) The Singapore Falun Dafa Association held a nine-day Falun Dafa class in both English and Chinese on December 5-13, 2020. Attendees watched recorded lectures by Falun Dafa's founder, Mr. Li Hongzhi, and also learned the five sets of exercises. During the experience exchange on the last day, all the attendees said they benefited both physically and mentally from the class. 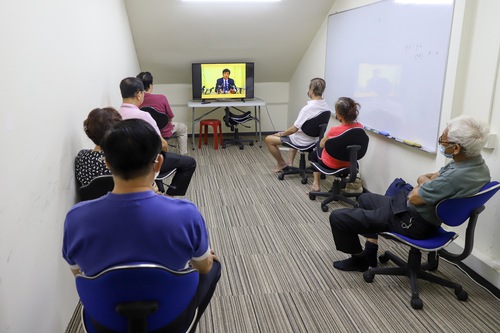 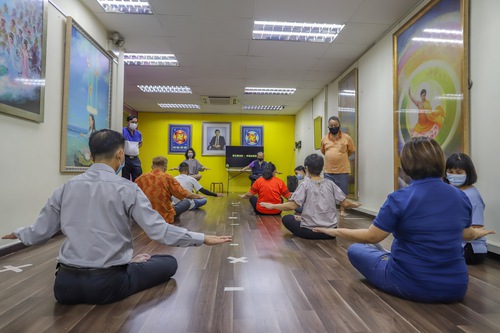 New practitioners learn the fifth exercise during the Chinese class. 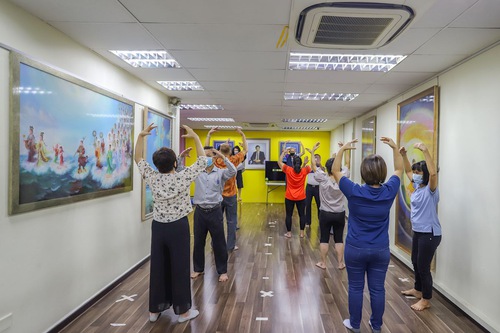 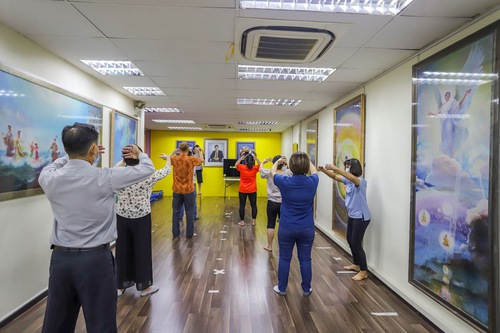 “Dafa is What I Have Been Searching For All My Life”

Xiao Li from China was a bit emotional when he started talking about his experiences. He said, “I feel especially deep emotion towards Falun Dafa. Dafa is what I have been searching for all my life.”

He explained how he had heard about Falun Dafa. He received some informational materials at a bus stop but accidentally dropped them. He really regretted it. During the coronavirus pandemic, he once again received materials about Falun Dafa, and he started doing the exercises with a group of practitioners at a park. He then decided to attend the nine-day class.

He said, “I am especially happy. During these nine days, I am especially happy to be here and listen to Master Li’s lectures every day. I may not be able to point out anything specific, but I can recall Master’s words when I meet with problems in my daily life. I immediately know how to treat the problem.”

He explained, “This reflects what Master Li said in Lecture Six in Zhuan Falun:“When you leave here maybe you won’t remember exactly what I talked about, but when you really run into problems you will remember what I said.”

Xiao Li said he now understands the purpose of cultivation.

Ms. Wei Xiao read Zhuan Falun, the main book of Falun Dafa, five years ago. She said, “Zhuan Falun changed my perspective. In the past, I persistently sought many things. Now that has changed. Ever since I read the Fa, I am very healthy and I seldom get sick.” She started to learn the exercises over a year ago.

This is the first time Ms. Wei attended the nine-day class. On the third day, her celestial eye opened and she saw that the painting hanging on the wall that showed Master Li in a suit seemed to have changed into a Buddha statue (Master's Law Body).

“Thank You Master for Saving Me”

Raymond’s wife is a practitioner. Although he did not practice, he knew that Dafa is good. He underwent heart bypass surgery. Before and after surgery, he silently recited the words, “Falun Dafa is good, Truthfulness-Compassion-Forbearance is good.” The doctor said his surgery was very successful.

He explained that he suddenly had a stroke and could not move. His hands and legs were stiff and he could not even move his eyes. He lost all feeling in his body. On the way to the hospital, he recited the nine words in his head. Within a few minutes, he could move his hands. He said he was truly grateful and added, “Thank you Master for saving me. Otherwise I would have been paralyzed.”

Raymond said that after the first day of class, his body felt very light and relaxed and his mind was clear.

Participants Benefit Both Physically and Mentally

One couple, Mr. Steven and his wife Peggy participated in the English language class. Mr. Steven could not walk up the stairs by himself. His wife had to hold his hand and help him and it took him a long time. During the nine-day class, he saw improvements every day. One day, the couple suddenly realized that Mr. Steven was walking up the stairs in front of his wife. He no longer needed her help. Mr. Steven said, “I feel much better. My walking has also improved.”

The other new practitioners also talked about how they had benefited. Ms. Qiaozhen said that on the second day of the class, Master cleansed her body. Now she felt much lighter and relaxed when she walked. In the past, she could not walk very far. Another attendee, Mr. Li, said he had learned the exercises at home, but doing the exercises with a group was totally different. Listening to the lectures with everyone felt very good, he said, adding that the energy field during the class was very good.

Mr. Du said that in the past he would faint suddenly. The doctor said that he lacked vitamin B. After taking the class for a few days, he felt relaxed and much lighter when he walked. He also became more openhearted and no longer felt anxious. He said he looked forward to practicing Falun Dafa.

“Heilongjiang Teacher, 72, Sentenced to Six Years for Her Faith”