(Minghui.org) Falun Dafa practitioners in Los Angeles held an event in Monterey Garden City, where Chinese people often gather, on November 29, 2020. The practitioners showed their support for the more than 368 million Chinese people who have quit the Chinese Communist Party (CCP) and its affiliated youth organizations.

Dozens of practitioners' cars formed a “truth clarifying car group,” displaying signs with messages such as “The Heavens are Annihilating the CCP,” “Follow the Gods,” “Quit the CCP and its Affiliations to Enjoy Bliss,” “Falun Dafa is Good, Truthfulness-Compassion-Forbearance is Good,” “Stay Far Away from the CCP and You Stay Far Away from Covid,” and more. The cars drove through the city streets, receiving support from many residents. 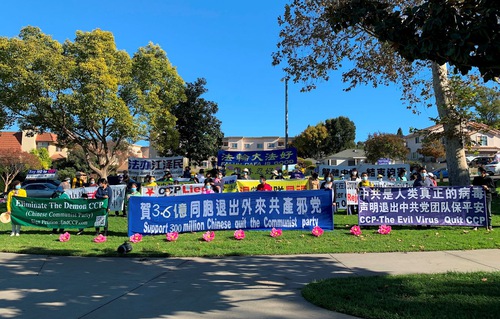 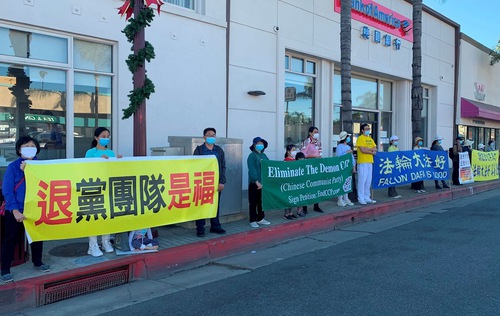 Practitioners display banners on the busy city streets to celebrate 360 million Chinese people quitting the CCP and its affiliated organizations. 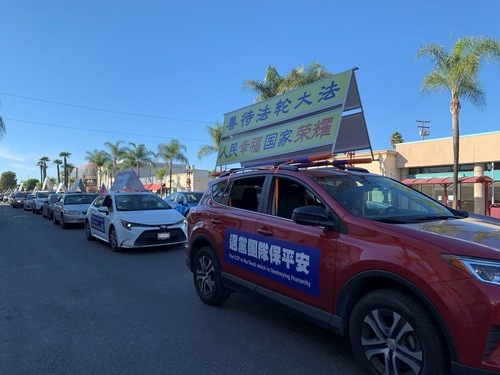 Li Hailun, the person-in-charge of the Los Angeles Center for Quitting the CCP, explained how the movement to withdraw from the CCP started. “Sixteen years ago, when The Nine Commentaries on the Communist Party was published, the evil nature of the CCP was exposed and this started the wave of large numbers of Chinese people quitting the CCP. To date, there are more than 368 million Chinese people who have announced that they have quit the CCP and its affiliations,” she said.

“Since the CCP infiltrated China, the Chinese race and the whole of China landed in a large calamity,” she said. “The CCP started all sorts of movements in China to suppress, enslave, harm and kill many Chinese people in the process. The history of the CCP is filled with bloodshed and crimes and its ultimate aim is to annihilate the Chinese people and subsequently annihilate the whole world. This CCP virus (coronavirus) became out of control and spread to the whole world due to the CCP intentionally withholding the truth and lying. This showed the whole world the CCP’s true identity.”

Li Hailun also said, “The Communist specter, which is the CCP red devil will definitely be punished by the heavens. The Heavens will eliminate the CCP very soon and every single one who has joined the CCP and its affiliations but has yet to announce they have quit the CCP, should quickly announce they quit so that they will not die together with the CCP when the heavens punish it. Those who work closely with the CCP, take the same stand as the CCP, or collude with the CCP, should quickly leave the CCP and its affiliations so that they can be safe.”

Many Chinese people quit the CCP and its affiliated organizations during the activities and some of the righteous Chinese people talked about their knowledge of their evil nature and commended Falun Gong. 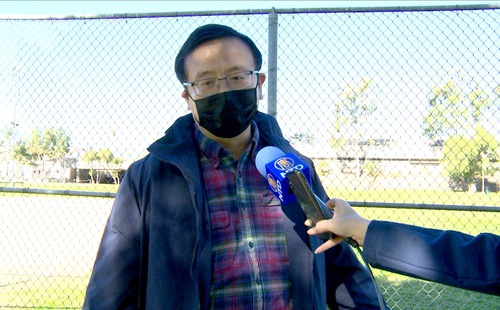 Qing Yang, who immigrated to the U.S., condemns the CCP, saying that it is inhumane.

Qing Yang, who migrated to the U.S., expressed his indignation towards the CCP’s persecution of Falun Gong practitioners who cultivate “Truthfulness-Compassion-Forbearance.” He condemned the CCP, saying that it is inhumane. Mr. Qing said that he did not believe in the CCP and had not joined the Party. “When I was young and immature I joined the Young Pioneers, one of the youth affiliations of the CCP,” he said. When he saw Falun Gong practitioners meditating and clarifying the truth in the park that day, he decided that he wanted to quit his CCP affiliation and break free from it.

Mr. Qing said that during his few decades of life in China, he had been brainwashed by the CCP’s lies. As he had no means to get true information, he was being kept in the dark by the CCP all that time.

“After coming to the U.S., through the foreign media, I thoroughly learned the true stories about many things that I would never have had the chance to know about in China,” he said. “In reality, we were the ones who were kept in the dark for so many decades. I now understood that I should start my life anew. All the things from China that I learned in the past, I want to discard them all.”

Mr. Qing said that he had heard about the persecution of Falun Gong while he was still in China. “Jiang Zemin is the main culprit. I really do not understand what damage Falun Gong supposedly did to the country and its people. What disaster has it brought? None, there is none! Why are they doing that [persecution]? A lot of people [Falun Gong practitioners] were arrested. I also heard that there are people who are doing forced organ harvesting, from live people. These are all very cruel acts, taking away people’s lives, this is definitely brutal and totally inhumane.” 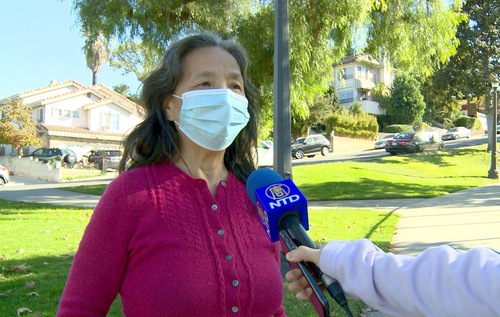 Ms. Huang, who moved to the U.S. more than 30 years ago, had taken her grandchildren to the garden for a walk that day. When she saw that Falun Gong practitioners were holding a gathering event to celebrate “The Quitting of the CCP and its Affiliations by 360 million Chinese people,” she brought her grandchildren to the gathering and stood beside the Falun Gong practitioners.

Ms. Huang lived under the rule of the CCP regime when she was young and went through three years of famine in which millions of Chinese people starved to death. In order to escape the dictatorship of the CCP, her whole family fled to Hong Kong during the 70s. Later, as the CCP wanted to recover Hong Kong, they escaped to the U.S.

“We want to support these Falun Gong friends, as practitioners are all very kind,” Ms. Huang said, “The CCP’s persecution of Falun Gong is too cruel. Falun Gong did not do any bad deeds, why do they persecute Falun Gong? I feel very angry in my heart too. Especially Jiang Zemin, he is very bad. We know how he obtained his position at that time. He climbed to his position totally through flattery and suppressing the democrats. My whole family is also victims of the CCP regime. We suffered a lot of hardship under the CCP, because my father was a scholar who had studied overseas, so he was persecuted severely.”