(Minghui.org) On December 10, 2020, the 70th anniversary of International Human Rights Day, Falun Dafa practitioners in Hong Kong peacefully protested in front of the Liaison Office of the Central People's Government. They called on the CCP (Chinese Communist Party) to immediately end the persecution and release all detained practitioners and prisoners of conscience. They pointed out that the CCP has violated human rights for decades. Reporters from several media companies broadcasted live reports during the event. 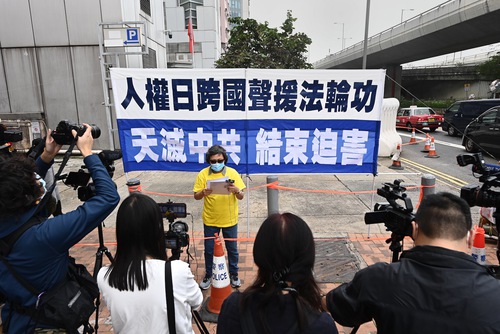 Ms. Liu Hui Qing, spokesperson for the Hong Kong Falun Dafa Association spoke during the event and said that the CCP's behavior is getting increasingly outrageous. “This year it implemented the National Security Law, destroying Hong Kong's 'one country two systems' governance. This angered Hong Kong citizens and caused international concern. Despite the international community's response, the CCP did not scale back. Instead, it initiated large-scale captures, disqualified members of the legislative council, terminated peoples' accounts, etc, worsening the human rights violations in Hong Kong.” Ms. Liu pointed out that now the entire world can see the CCP's true nature.

Liu Hui Qing added, “In the past most people were not willing to believe that the CCP's persecution of Falun Dafa practitioners was true. Now the CCP has begun treating Hong Kong citizens the way it treats people in China. Kindhearted people in cosmopolitan Hong Kong are suppressed.”

“The CCP no longer bothers covering up its actions. The evidence is unfolding before peoples' eyes. This is hard proof of the CCP's cruel suppression and persecution of Falun Dafa practitioners and other groups over the decades the regime has been in power.”

Ms. Liu also pointed out that the CCP has influenced Western society. “It exports its CCP ideologies to have 'social democracy.' This is causing chaos in the 2020 U.S. General Election, turning it into a war between the righteous and the evil. The extreme leftist political groups and the CCP demon behind them are trying to bluff and steal the U.S. elections with lies, depriving people of their rights and freedom. What's unfolding in the U.S. is exactly what was described in the Nine Commentaries' Editorial Department's editorial article "How the Specter of Communism is Ruling Our World." The evil has already taken over our world.' Even the U.S. which is deemed to be the leader of the free world is invaded and almost totally occupied by the CCP.”

Liu Hui Qing said that during previous International Human Rights Day, they always held large-scale parades and gatherings. However, due to the coronavirus pandemic, they just held a small gathering, hoping to draw attention to the persecution of Falun Dafa. She pointed out that current events highlight, “Each person's choice between good and evil.” She appealed to people to pay more attention to this matter.

Calling for an End to the Persecution of Falun Dafa

Falun Dafa practitioner Zhou Sheng, said that the CCP's persecution of practitioners has been going on for 21 years. The former CCP head Jiang Zemin, initiated a series of genocidal policies that were implemented by the CCP regime. Hundreds of thousands of Chinese citizens have been abducted, imprisoned, sentenced to forced labor or brainwashed. 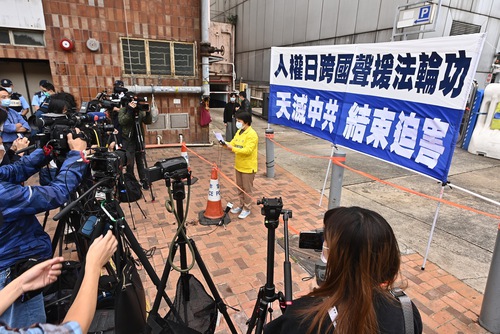 Ms. Zhou pointed out that the deaths of nearly 4600 Falun Dafa practitioners due to the persecution have been documented-–but these are just the tip of the iceberg. The actual number of cases of practitioners injured or handicapped due to different types of physical and mental tortures is harder to account for. Tens of thousands of unknown victims have died due to live organ harvesting. All these brutal acts that were carried out during the persecution of Falun Dafa has caused the persecution to be one of the greatest human rights disasters of the 21st Century.

She also said that the CCP has committed many serious crimes such as torture and genocide. The people who participated in this persecution and these criminal acts will one day definitely be held accountable.

Representing Falun Dafa practitioners on this International Human Rights Day, Ms. Zhou Sheng called on all people to increase their efforts to stop the persecution. “Sentence the main culprit who ordered this persecution, annihilate the CCP regime in a peaceful way, and get rid of the CCP ideology. We need to highlight mankind's universal values, kind thoughts and conscience. End the human rights disaster in China and Hong Kong so that China and the whole world can head towards a bright future.”

Since July 1999, millions of Falun Dafa practitioners have been abducted and imprisoned in China without any legal procedures. Many of them suffered inhumane torture and even lost their lives in the process. In July 2020, on the 21stanniversary marking the beginning of the persecution, Peter Kent, a senior member of Canada's Parliament, Judy Sgro a member of parliament in Sweden and Ann-Sofie Alm, initiated a joint action to call on dignitaries of different countries to sign a joint statement that calls upon the CCP to immediately end the persecution of Falun Dafa.

According to a news publication by the New York Falun Dafa Information Center, as of December 10, 2020, (South Australia Time), over 900 dignitaries from 35 countries and areas such as Europe, North America, Middle East, Asia and Latin America have expressed their wish to participate in the joint action to condemn the CCP's persecution of Falun Dafa. They call upon the CCP to stop the persecution of Falun Dafa immediately.

“Knowing Ourselves and Knowing Who We Are Dealing With”