Media Reports Shed Light on CCP’s Infiltration in the US

(Minghui.org) In an article titled “Resisting Beijing’s attempt to reshape and dominate the world is the challenge of our generation” published in the Wall Street Journal on December 3, 2020, John Ratcliffe, Director of U.S. National Intelligence, said that the Chinese Communist Party (CCP) poses the “greatest threat to democracy and freedom worldwide since World War II.”

“The Chinese Communist Party’s authoritarian leaders seek to threaten our free speech, politics, technology, economy, military, and even our drive to counter the COVID-19 pandemic.”

Marco Rubio and Mark Warner, Acting Chairman and Vice Chairman of Senate Select Committee on Intelligence, respectively, released a joint statement on December 4. “We agree with DNI Ratcliffe that China poses the greatest national security threat to the United States. Our intelligence is clear: the Chinese Communist Party will stop at nothing to exert its global dominance,” wrote the statement available on the Senate website.

Now a recorded lecture of a Chinese professor and a recent Axios report about a Chinese intelligence operative are providing evidence of the deep and extensive infiltration by the CCP and the national security threats it poses to the U.S.

“We Have People At the Top”

In a lecture streamed by the “Guan Videos” on November 28, Di Dongsheng, a professor at Renmin University in Beijing, bragged about China’s network of “old friends” in the U.S. who have extensively influenced the U.S.-China policies in the past few decades.

Di said that, after Trump was elected in 2016 and waged a trade war with China, the CCP couldn’t handle him. But between 1992 and 2016, China was able to quickly fix all kinds of crises with the U.S. From the Yinhe incident [a Chinese container ship carrying chemical weapon materials to Iran] to the bombing of the embassy and the mid-air collision, everything was taken care of swiftly, in no more than two months. Why? Because “we have people at the top. At the top of America's core inner circle of power and influence, we have our old friends.”

In an example, Di said he was once introduced to a Jewish woman who helped the CCP solve many problems. He said this woman was the president of a top Wall Street financial institution’s Asian operations. She spoke very fluent Mandarin and lived in a courtyard house in the Eastern District along the Chang’an Avenue [a prime location near Tiananmen Square] in Beijing. She didn’t only have Chinese citizenship, but also Beijing hukou [official household registration].

Di also said that “In plain and simple language, during the last three to four decades, we used the core circle inside America's real power. As I said Wall Street had a very profound influence over America’s domestic and foreign affairs since the 1970s. We used to heavily rely on them. The problem is the role of Wall Street has been declining since 2008. But most importantly, after 2016 Wall Street couldn’t control Trump, because, awkwardly, there was a soft breach of contract between them, which made them hostile to each other.

“During the U.S.-China trade war, they tried to help. My friends in the U.S. told me that they tried to help, but they couldn’t. Now with Biden winning the election, the traditional elites, political elites, and the establishment have a very close relationship with Wall Street. Trump has been saying that Biden’s son has foundation companies all over the world. Have you noticed that? Who helped him [Hunter Biden] build the foundations? Got it? There are a lot of deals in all these.”

Although Di’s video was soon deleted from the Chinese Internet and social media after it was published, it was reported by many western news outlets. Both President Trump and lawyer Sidney Powell retweeted the video. 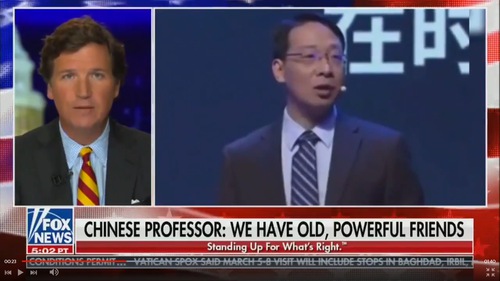 In another alarming report, it revealed how the Chinese agents could spend years infiltrating the U.S. political circles to obtain intelligence and influence its policy-making process.

In an investigation by Axios for over a year and interviews with four current and former U.S. intelligence officials, as well as 22 current and former elected officials, political operatives and former students, they traced back the activities of a Chinese spy called Fang Fang, or Christine Fang, who quickly found her way into the political circle in California by helping politicians to raise funds or having a sexual relationship with them.

The December 8, 2020, Axios report, titled “Suspected Chinese spy targeted California politicians,” said that Fang enrolled as a student at California State University East Bay in 2011. She served as the president of the School’s Student Association and president of the campus chapter of Asian Pacific Islander American Public Affairs.

Fang soon became unusually active in getting to know many politicians, especially “up-and-coming local politicians in the Bay Area and across the country who had the potential to make it big on the national stage.”

She often brought in donors for candidates, and “frequently invited political figures, business executives, and Chinese consular officials to attend the flurry of high-profile events she organized over a period of several years.”

Between 2011 and 2015, she was seen in photos with many influential politicians in California, including Congressmen Ro Khanna, Eric Swalwell, and Mike Honda, as well as Congresswoman Judy Chu.

During this time, she kept frequent contact with the Chinese consulate in San Francisco and was given a “certificate of honor” by the consulate in 2012 for her “excellent organizing and leadership” as president of the CSU East Bay Chinese Student Association.

One intelligence officer said they discovered Fang after they found her meeting and talking to another suspected Chinese spy on several occasions. This latter suspected spy, while working as a diplomat, “used the consulate as a base to do outreach to state and local-level U.S. politicians, including inviting them on trips to China.”

The Axios quoted an FBI agent as saying that, “‘The fact that she [Fang] was traveling around the country’ getting close to U.S. politicians ‘was a big red flag.’ ‘She was on a mission.’”

Just when the FBI started to investigate her in 2015, Fang suddenly left the U.S. and returned to China.

“Eliminating My “Muddle Headedness” When Studying the Fa”

““The Lord of the Rings” May Be a Metaphor for Our Current Situation in the U.S.”