(Minghui.org) At an online forum organized by the Committee on the Present Danger: China (CPDC), “The Chinese Communist Party's Crimes Against America,” on November 10, 2020, panelists discussed how the Chinese Communist Party (CCP) spreads its communist ideology to the world and interfered in the U.S. election, calling it a transnational criminal organization. 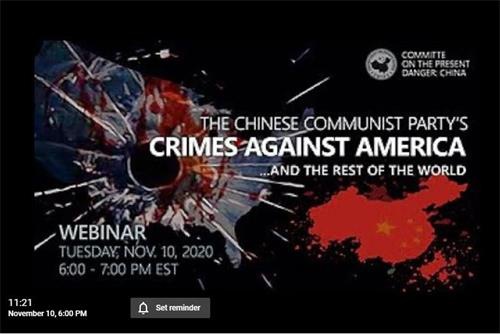 CPDC hosted a webinar “The Chinese Communist Party’s Crimes Against America” on November 10, 2020

U.S. Companies’ Investment in the CCP Is to Fund Criminal Activities

The CPDC stated that the CCP is notorious for its oppression at home and threats abroad, and that it has come to be widely perceived as a bully. But what the CCP really has become through its global expansion is a transnational criminal organization.

Worse yet, unwitting Americans are funding the CCP’s myriad crimes – to the tune of trillions of dollars – via pension plans and other stock market investments in Beijing’s state-controlled and Party-tied companies. The Pentagon has designated scores of these companies as “Chinese Communist military companies.” Such companies build the weapons and technology designed to dominate and enslave liberty-minded people in China, America, and the rest of the free world.

Frank Gaffney, Vice Chair of the CPDC and former Assistant Secretary of Defense (Acting) during the Reagan administration, expressed that the CCP is the common enemy of the world. Many experts and high-ranking officials have seen through the nature of the CCP after emergence of evidence of its crimes from recent events, especially the CCP virus (the COVID-19 virus).

Based on the CCP’s massacres and other crimes against humanity, Gaffney pointed out that they have come to the conclusion that the CCP is a transnational criminal organization, and that the U.S. government should be aware and prohibit the CCP's criminal acts.

China Expert: The CCP Interfered in the U.S. General Election

Charles “Sam” Faddis, former CIA operations officer, author and national security commentator, stated that the CCP has been using propaganda and subversion against other countries. It tried to subvert the elites in other countries or work with groups there to “push the Chinese Communist Party’s agenda for the benefit of Beijing and detriment of other countries.”

Faddis pointed out that in the past six or seven months, the CCP has supported the “Black Lives Matter” (BLM) and other groups taking action on the street. “If you look at funds moving into the BLM movement, you will see a significant portion coming from a Chinese organization called the Chinese Progressive Association (CPA).” CPA’s Boston chapter annually raises China’s flag in Boston. Its chapter in San Francisco has a very long and close connection with the Chinese Consulate there. CPA’s origins go back to a series of groups in the 1960s and 1970s, all of which had ties with the CCP and have been promoting the Marxist agenda on U.S. soil.

Trevor Loudon, expert on Marxist seditious and revolutionary activity, author and filmmaker of The Enemies Within, further explained that the Chinese Consulate in San Francisco and the CPA played a key role in infiltrating the U.S.

Loudon said, “What we have observed in the past several years is a network of mass voter registration organizations all cross the United States, but mainly focused on the southern part of the United States and California. These are run mainly by the Liberation Road, which is a pro-Chinese Communist group. That effectively provides staff to the CPA.” They set up a group in Virginia called the New Virginia Majority to sign up hundreds of thousands of minority pro-Democratic voters and get them to vote. They were able to flip Virginia from a Republican state to a Democrat state.

These groups are working in the southern states to destroy the Republican party base there, which they stated openly in their writing. A group named “Seed the Vote,” run by a leading member of the CPA, working directly with the Chinese Consulate in San Francisco, worked in key states including Texas, Florida, Michigan, Wisconsin, Arizona, Nevada, Pennsylvania, and North Carolina. They set up groups in these states to do massive voter registration to get hundreds of thousands of minorities to vote, in an attempt to flip these states.

Loudon stressed, “We are looking at vote fraud everywhere, corruption of voting machines, dead people voting, … But what we are ignoring is, right in front of our eyes, pro-CCP communists have 7,000 volunteers motivated in the last election... In Arizona, they made 7 million phone calls. They knocked on a million doors in Arizona alone. All generated by pro-CCP communists.” Their activities to get the voters to vote are legal, “but it is operated in the interests of communist China: specially to elect Joe Biden who they (the CCP) love and to destroy Donald Trump who they certainly do not love.”

Gordon Chang: The CCP Is the Number One Transnational Criminal Organization

Gordon Chang is a commentator, attorney, and author of The Coming Collapse of China. He argued that the CCP uses artificial intelligence, big data, and surveillance cameras to monitor the 1.4 billion Chinese people. Any large-scale crimes against the U.S. and initiated from China, including counterfeit bills, fentanyl, cyber attacks, money laundering, and intellectual property theft, cannot happen at all if the CCP does not approve it. “We should call it what Beijing calls it – ‘Unrestricted Warfare.’”

Chang stated that the CCP, to increase its influence over the world, uses criminal activities to strengthen its power and weaken other countries’ powers.

“The Chinese regime is known for its viciousness,” Chang pointed out. “No crime is too big or too small for the party.”

Sean Lin: The CCP Launched War against Belief and Promoted Communism to the World

Dr. Xiaoxu Sean Lin is the Executive Director of the Global Alliance Against Communist Disinformation and Propaganda, microbiologist, survivor of the Tiananmen Square Massacre, and a Falun Gong practitioner.

Dr. Lin pointed out that the CCP does not care about human lives. It hid information about COVID-19 and caused the pandemic to spread to the world. More than 200,000 American people have died from it.

The CCP is at war against all religions in China. It carries out persecution against Falun Gong, Christians, Uighurs and many ethnic and religious groups.

“They want to change people’s spirituality – your identify and your mind,” Dr. Lin said.

He also said that in the U.S. election, through their propaganda machine, “the (CCP) wants to make people to think that justice has no hope in the United States. They want the whole world to see even the beacon of freedom and democracy – the United States – doesn’t work. They want to promote their ideology and their totalitarian system.”

They want to destroy American people’s faith in the path that its founding fathers have established. “We are already in a war right now.”

In addition to the above speakers, Ilshat Hassan, Director of China Affairs, World Uyghur Congress and Maura Moynihan, Tibet specialist, former Radio Free Asia/Nepal bureau chief and columnist with The Asian Age also talked about the CCP’s persecution against the people in Xinjiang and Tibet.

Background Information: The Committee on the Present Danger: China

The Committee on the Present Danger: China is a cross-party organization founded in Washington, D.C., on March 25, 2019, by more than two dozen prominent U.S. defense, political, religious, and media figures. The organization believes that mainstream American elites have realized that, like the Soviet Union in the past, the CCP poses a threat to the liberal concepts and ideology that the United States upholds, and that in order to defeat this threat, the United States needs to reach a new consensus on policies and priorities.

The CPA was founded in 1972 in San Francisco by officials of a Chinese organization I Wor Kuen (IWK). IWK proclaimed that it wanted to “scientifically apply Marxism, Leninism, and Mao Zedong Thought to the American Revolution.” Today, the CPA has chapters in San Francisco, New York, and Boston. CPA is alleged to have close ties to the CCP.

During the U.S. election, CPA set up special working groups in a number of states, including Pennsylvania, Michigan, Wisconsin, Arizona, Nevada, North Carolina, Florida and other key swing states, and even Texas, in an effort to canvass for Biden.

“California Rally Denounces Communism in America: “A Battle Between Good and Evil””