(Minghui.org) Today's news from China includes incidents of persecution that took place in 14 cities or counties in 9 provinces, where at least 36 practitioners were recently persecuted for their belief. 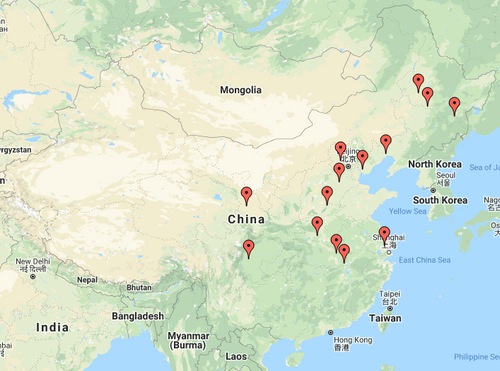 Mr. Feng Youfu and his wife Ms. Li Rujin were arrested at home on the morning of September 6, 2020. Officers from the Guilin Police Station came in two police cars. They seized several Falun Gong books and hundreds of yuan from the couple’s home, and took the couple to the police station. The officers examined the couple's eyes using special equipment, and drew their blood. They were released the same day.

Mr. Niu and his wife from Linqi Town were arrested. Mr. Niu was detained for ten days. His wife was detained for 15 days. Both were taken to a hospital and underwent comprehensive physical exams. Two large syringes of blood were drawn from each of them. It was said that the blood sample would be sent to Zhengzhou City for record keeping.

Two seniors in their 70s were arrested for no reason by officers from the Guilin Police Station on September 6, 2020. The officers took the practitioners’ blood and examined their eyes using special equipment.

Ms. Gao Guixiu was informed by the Jiudaoling Police Station in Yi County two weeks ago that her case had been submitted to the Linghai Procuratorate. She was at her son’s home out of town and did not return.

Her brother-in-law got a call from the police station several days ago. The caller said that Ms. Gao would be put on the police wanted list if she did not come home.

Mr. Qiu Chenyang and Mr. Wu Guangwang were arrested at 9:00 p.m. on September 5, 2020, after someone reported them when they were posting Falun Gong materials in Shunhe Town. They were taken to the Shunhe Police Station and released on the evening of September 6. They were arrested again at work on September 8 and detained in Hong’an County. Their homes were ransacked the same day by officers from the Macheng Domestic Security Division and the Shunhe Police Station. The officers seized over 50 Falun Gong books and more than 300 copies of Minghui Weekly from Ms. Qiu’s home, and three Falun Gong books from Mr. Wu’s home.

Ms. Wang Huilin was harassed at home on the afternoon of September 9, 2020. Honghuayuan Village Communist Party secretary Zuo Xiucang, and Liu Ziyan from the Huanggezhuang Town 610 Office, came to Ms. Wang’s home and tried to coerce her into signing three statements. They threatened her and said that her daughter’s job would be affected if she refused to sign. They said they would come back the next day with officers from the police station.

Ms. Zhang Ruilian was not there when Taipingzhuang Village Communist Party secretary Ma Xijing came to her home on September 3, 2020. Ma came back on the morning of September 4. Ma made threats, and phoned Ms. Zhang’s mother-in-law, insisting that she find Ms. Zhang’s son, and work together to pressure Ms. Zhang to sign the three statements.

Ms. Zhang Xiuying’s son was harassed at his store by two agents from the Wenbei Office and the Wenminglou Neighborhood Community on the afternoon of September 2, 2020. They threatened him and said, “Your mother already has a criminal record. It won’t be that easy if she is caught distributing Falun Gong materials again.”

Zhang also called Ms. Feng Yuying’s son's work unit. A unit leader told the son to persuade his mother to sign the three statements, otherwise he would be fired.

Mr. Luo Chuan appealed after he was sentenced on June 29, 2020. The Chengdu City Intermediate Court affirmed the sentence without any hearing on August 31, 2020.

Ms. Qu Lihua’s family received a harassing phone call from Zhang Baoku, a team leader from the Hailin Farm, on September 11, 2020. Zhang demanded to know Ms. Qu’s address. Ms. Qu lives out of town. Her family refused to tell him.

Ms. Hao Shumin was arrested at home by Chen Yanqing and other officers from the Anguo City Domestic Security Division on the afternoon of September 10, 2020. The officers threatened her, citing that she did not answer their calls. They took her to the Qiaobei Police Station, and forced her to write down “volunteer to deposit 5,000 yuan as guarantee,” and sign it. They ordered her to take a dedicated phone card and answer their calls at any time.

Ms. Hong Xia was arrested in an open market by officers from the Domestic Security Division on the morning of September 8, 2020. The officers took her to the division, and forced her to provide her fingerprints on a written record of police interrogation. Afterwards they phoned her family to take her home.

Mr. He Guozhang was taken to the Wenjiang District Procuratorate by officers Chen Renzhe and Chen Jialin from the Liucheng Police Station on the afternoon of September 10, 2020. When he was there, he learned that the police had filed charges against him for two cases to the Procuratorate. On May 1, 2018, Mr. He asked his grand niece to bring Falun Gong flyers to their hometown. When they were discovered in the Chengdu Railway Station, his grand niece was detained for 7 days. On April 10, 2019, Liaoyuan Neighborhood Community officer Zhang Sijun, agent Bai Bin, and officer Wang Yonghong from the Liucheng Police Station searched Mr. He’s home and confiscated his computer, printer, Falun Gong books, and materials.

In a hallway at the Procuratorate, a prosecutor questioned Mr. He and demanded to know the source of the Falun Gong materials. She told him to hire an attorney. Mr. He replied, “I did not break the law. Why do I need an attorney?”

Mr. Yuan Jinzhu was arrested at home and taken to the Wuxue City Detention Center by officers from the Dahe Town Police Station on August 29, 2020.

Ms. Wang Shuhua and her family were harassed by agent Wang Qiushi from the Longyuan Neighborhood Community, Zhaoyuan County. Wang tried to coerce Ms. Wang and her family into signing and providing their fingerprints on a repentance statement.

Agents from the Zhaoyuan County Education Committee and officers from the Gulong Town Police Station went to the First Middle School and tried to harass Mr. Wang Shulin at work on September 10, 2020. Mr. Wang managed to leave the school through the back door.

Practitioners in Huilong Town were reading Zhuan Falun in Mr. Ding Yongsheng’s home on the evening of September 10, 2020 when the door was swiftly broken down and more than 30 officers rushed in. Five practitioners, including Mr. Ding and his wife, were arrested. The officers then went to two other practitioners’ homes and arrested them.

Ms. Yu Xiuzhi was harassed at home by officers from the Handian Town Police Station and village head Ding Wenqing. They ordered her to sign a guarantee statement and threatened to stop her husband’s paycheck if she did not comply. They took away her Minghui Weekly and copies of articles by Falun Gong’s founder.

Ms. Peng Xia and Ms. Ji Shujun were arrested in Tumu Town by three officers from the local police station on the morning of September 10, 2020.

Ms. Wang Yaqin’s family were repeatedly harassed from August 10 to September 6, 2020 by several people claiming to be from the police station and the neighborhood office.

On the afternoon of September 7, Ms. Wang and her family came home and found that the keyhole was blocked up. A person who was monitoring their home noticed them, and called the police station. About twenty-four officers came, arrested Ms. Wang, and ransacked both her and her mother’s home simultaneously.

Ms. Wang was held at the Peili Police Station. Her family went there several times, and appealed in vain for her release. Officers from the police station ransacked her home twice afterwards.

Officers from the Peili Police Station took Ms. Wang to the Qilihe Detention Center twice. Both times the detention center refused to accept her. The police took her back and held her in the police station. They told her family that she would be detained for 15 days, but did not show them any documentation.

The police took Ms. Wang to the Xigu District Detention Center at around 9:15 a.m. on September 10, 2020. The officers told her family that the decision came from the top. She is held there.

Mr. Wang Zizhou, around 70 years old, was arrested in early 2019 after someone reported him. His home was ransacked. His whereabouts are unknown since his arrest.

Ms. Wang Dehui from Yibin City lives in Chengdu City. She was harassed by community officers and property staff on January 8, 2020. They demanded to know if she still practiced Falun Gong. They said they were just carrying out orders from the Gaoxin District Domestic Security Division.

Ms. Wang was harassed by officer Li Xiaobo and assistant officer Wang Honglei from the Xiqu Police Station on the morning of August 27, 2020. They talked to her in her doorway. When Wang tried to photograph her, Ms. Wang stopped him.

“Enlightening To “Matter and Spirit Are the Same””