London Resident: Principles of Falun Gong Are Most Important for the World

(Minghui.org) Falun Gong practitioners went to Trafalgar Square and Chinatown in London on October 10, 2020, to tell people about Falun Gong and raise awareness of the ongoing persecution in China. Many passersby stopped at the booth to ask questions and sign a petition to support the practitioners' efforts. 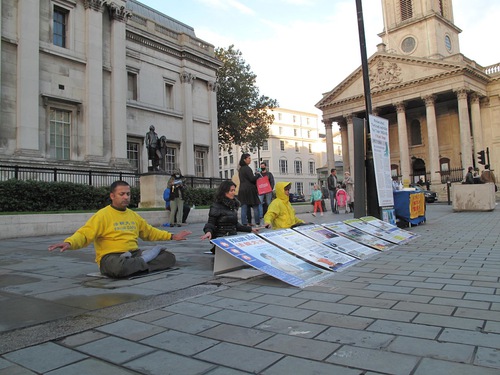 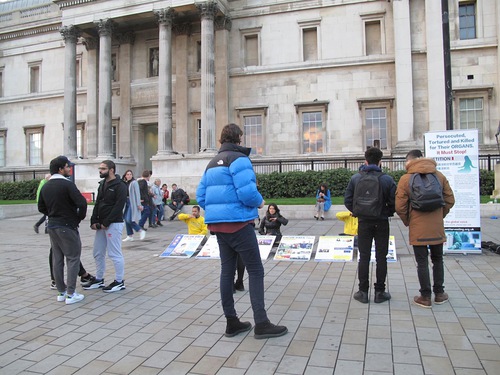 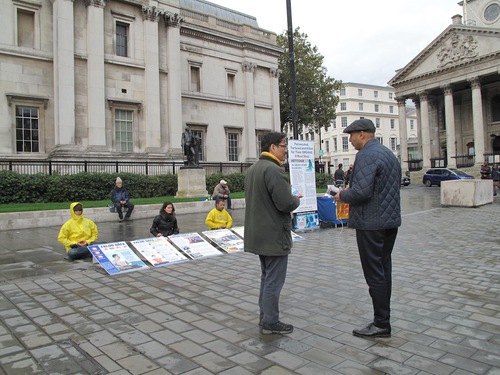 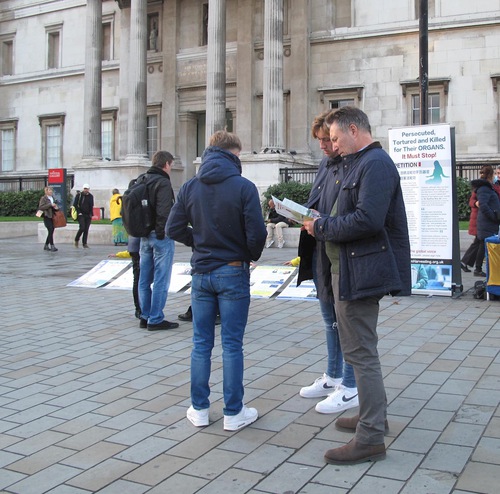 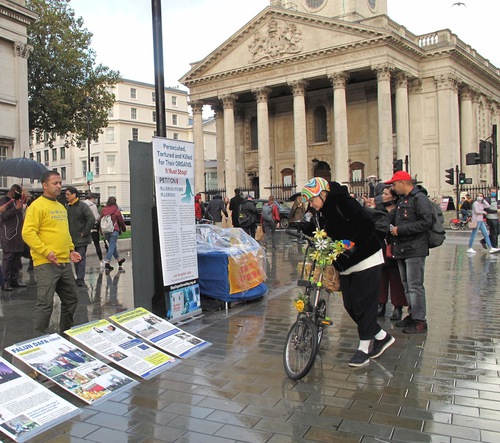 Jane was out riding her bike and stopped to talk with a practitioner at Trafalgar Square. She stayed at the event for a long time, reading the posters one by one. She told practitioners that she had been a civil servant for decades before retirement and now works at a farm in Wales. She was impressed by the compassion and selflessness that practitioners cherish. She said that the principles of Falun Gong apply to everyone and are most important for this world.

“Only by being considerate of others and not harming others can one achieve calmness in the mind,” she explained. Knowing that being altruistic is not easy, she praised practitioners for their efforts to improve their moral character. She said she hopes that they will benefit society in the long term. She was also interested in learning the practice herself.

French Man: I Will Bring My Friends Next Time

“I wish I had known such information earlier—innocent people are being killed and we cannot let this continue,” a young French man named Jacque told practitioners. Jacque was visiting London and this encounter at Trafalgar Square was the first time he had heard about Falun Gong. He quickly understood the situation and signed the petition to give his support.

He said it was horrible that people are detained and tortured for their belief in China. He said the Chinese Communist Party (CCP) is a totalitarian regime and the tragedies associated with it could end soon. “I know communism is always vicious like this and am looking forward to a change,” he continued, “What you are doing is great and please keep it up!”

Jacque said that he would try the Falun Gong exercises and was excited to hear that all the teachings—both the books and exercise instruction videos—are free for downloading on the internet. He was also happy to hear that the book containing the main teachings of Falun Gong, Zhuan Falun, has been translated into about 40 languages. Jack said he would pick up a copy in French to read.

He said he would post the pictures and videos he took of the event on social media to share it with others. When he learned that there would be another event the following day, he said he would come again and bring his friends with him. 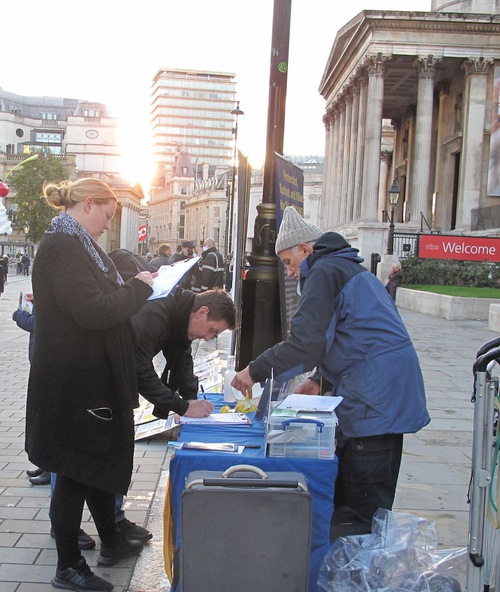 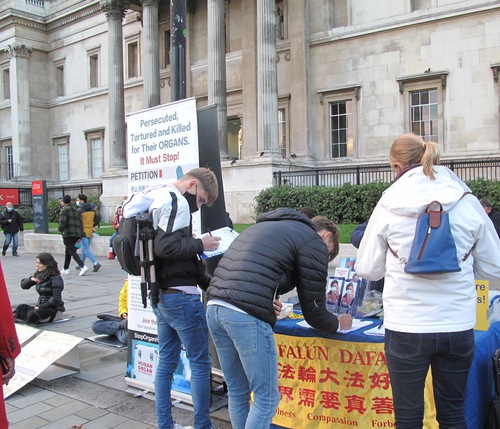 Bulgarian: Communism Is All Lies

Gorge is originally from Bulgaria, which was a communist country until 1989. He said he understands these kinds of regimes very well. “It is all lies,” he explained, “They tell you this today and something the opposite tomorrow—all propaganda. And friends could become enemies overnight.”

Gorge lived in Bulgaria for many years, first as an athlete, then as a swimming coach, and later as the director of a fitness center. His grandfather used to work as a gardener for the king. George said his entire family had preserved strong traditional values, including their religious beliefs. “All of these were before the communist party took power. Things changed a lot after that and we did not like it,” he said.

Unfortunately, communist ideology has spread to many countries in the world. Nonetheless, Gorge believes that the Chinese regime will not last long. “I believe God will make good arrangements for everyone, no matter who you are and where you stay,” he said. He signed the petition calling for an end to the forced organ harvesting in China and took some pamphlets about “Rejecting the CCP” for his friends.

When a practitioner talked about Falun Gong’s principles of Truthfulness-Compassion-Forbearance, Gorge nodded, “That is truth, I know.”

More People Need to Know This

Charley Calle is the manager of a charity organization that provides aid to homeless people. He was visiting London on October 10, and although practitioners had already packed up their materials and were ready to leave, one of them explained to Charley what Falun Gong is and why they were there.

Charley has a strong interest in oriental culture and said he understands what the Chinese people are suffering. In addition to signing the petition to support, he said he would look for more ways to let the public know what is going on in China.

“I think British citizens here should have awareness of the ongoing tragedies in China, which have already spread to the entire world,” he said. He hopes both the British government and ordinary citizens would gain a better understanding of the CCP and cherish mankind.

Touched by the principles of Truthfulness-Compassion-Forbearance that are embraced by practitioners, Charley said he admires the practitioners’ perseverance and their aspiration to become better citizens. As a meditation instructor, he understands things may not change in a short time. “But as long as we try, and as long as we focus on improving ourselves, the world will change one day,” he said. 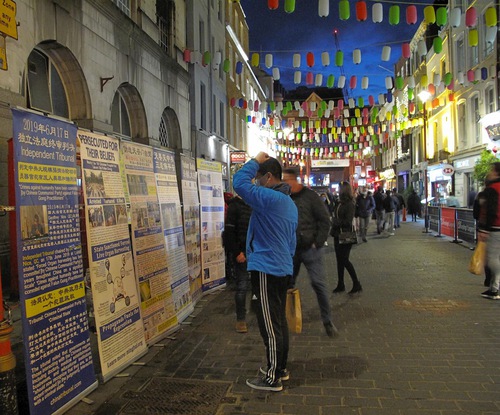 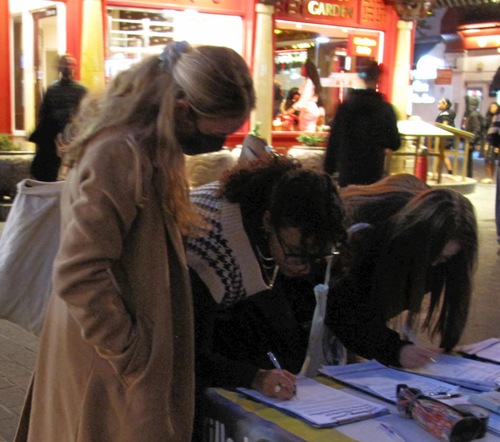 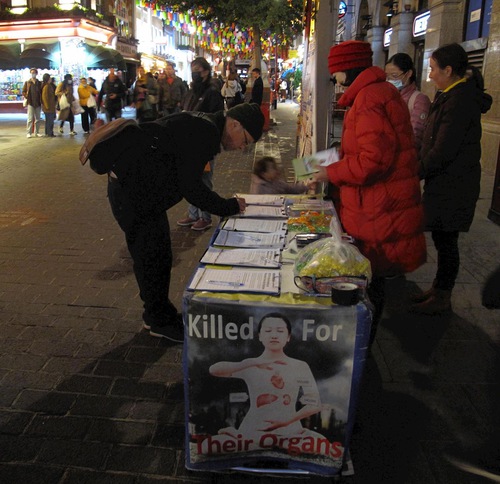 “I can feel the peaceful energy from your group, something the world needs,” said Jim as he passed Falun Gong practitioners in Chinatown.

Jim has lived in London for a long time and said he understands the practitioners' efforts to expose and oppose the CCP’s brutality. He had seen similar activities like this while visiting Prague in the past, and he had signed a petition to give his support. “My friends and I also talked about this,” he said, “You are very brave to challenge such a powerful regime and what you are doing is so peaceful.”

He agrees with the principles of Truthfulness-Compassion-Forbearance, because they are in line with traditional values. Chinese people need to awaken from these calamities and revive the culture damaged by the CCP, he said. A practitioner gave him a handmade lotus flower, which represents purity and happiness, and Jim said he would hang it by his window at home. 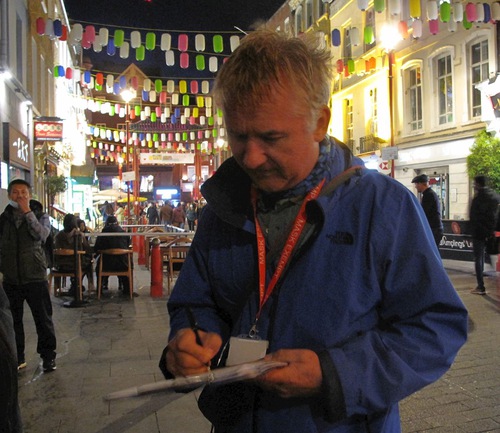 Jim is a retired IT professional. He said he witnessed how the CCP has expanded aggressively in recent decades to push its communist agenda globally. He said the regime is completely vicious, like a demon. Due to its hunger for power to control people, it had no mercy and no intention of promoting the common good. It is extremely greedy and destroys anything in its way.

The current society is a battle between good and evil, Jim explained. He said the British, and people all over the entire world, need to see through the toxin of communist ideology. It was already bad and crazy when it first formed more than 200 years ago. “Wherever its goes, it will bring killing and other destruction, regardless of whether it/s the Soviet Union, China, Vietnam, Cuba, or Venezuela,” he explained, “It is anti-tradition and anti-humanity.”

He was glad to hear that more than 360 million people have renounced the organizations of the CCP. “The world is changing fast and staying with the communists means self-destruction,” he added, “The Berlin Wall has fallen and the Soviet Union has collapsed, I believe China will change, too.”

“Former Teacher Sentenced to Prison for Her Faith, Mother Passes Away after Police Harassment”