(Minghui.org) Today's news from China includes incidents of persecution that took place in 21 cities or counties in 12 provinces, where at least 47 practitioners were recently persecuted for their belief. 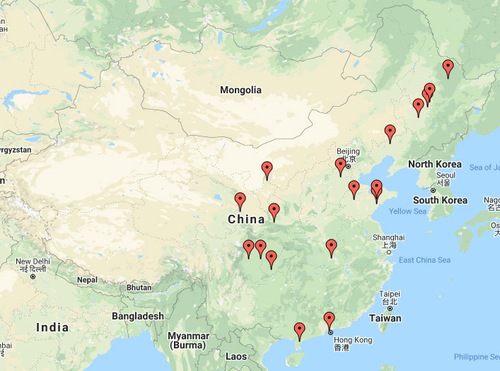 Ms. Xu Mingxia, Mr. Shen Hongqi, Mr. Jiao Bingnan, and Ms. Wang Yalan were tried by the Qishan County Court on August 18, 2020. Two lawyers from Beijing pleaded not guilty on their behalf. All four practitioners were masked and dressed in disposable protective clothing.

Ms. Zhang Shuqin was tried on August 19, 2020. Lawyers and family members, as well as Ms. Zhang herself, pleaded not guilty. The court has announced a hearing for September 18.

Ms. Guo Xiuying from Qingjingsi Village, Longping Township, was arrested by officers from the Fuyuanlu Police Station when she talked to people about Falun Gong on the morning of September 11, 2020. She is being held in the Yongxing Detention Center for 15 days of detention.

Officers and the director of the Handian Police Station, Shuangcheng District, and town government personnel went to Mr. Xu Qingshen’s home in Tianjia Village and harassed him on the morning of September 6, 2020. They demanded that Mr. Xu sign a statement renouncing Falun Gong. He refused.

Ms. Ma Xiuli and Ms. Yin were arrested by officers from the Chengguan Police Station on June 12, 2020. Ms. Yin was released. Ms. Ma was taken to the police station, where she was cuffed to an iron chair overnight.

The police took her to the hospital for a nucleic acid test and sent her home on June 13.

Two days later, she was again arrested and taken to the Yinchuan City Detention Center. She went on a hunger strike. She was released on June 21. She has now become displaced.

Officers from the Pingdu 610 Office and Sun Qianxun, Party secretary of Sunjiahui Village, Renzhao Town, went to Mr. Sun Wei’s home and harassed him on September 9, 2020. Mr. Sun was not at home then. The officers confiscated Falun Dafa books, and Falun Gong informational banners and stickers.

Sun also went to Mr. Sun Kelin’s home in the village and harassed him.

On the same day, the officers and Zhao Yingjun, Party secretary of Zhaojiaguan Village, went to Mr. Zhao Yougong’s home. He did not let them in.

They then went to Ms. Yu Zhen’e’s home and harassed her. They demanded to know if she still practiced Falun Gong.

Mr. Zhang Dianyuan and his wife Ms. Ren Yongping were arrested on July 15, 2020. They were held in the Nong’an County Detention Center. Their family received a phone call from the police that the couple had been officially arrested. Their cases were turned over to the Nong’an County Procuratorate. Mr. Zhang’s parents were greatly saddened upon learning of their arrest.

Ms. Chen Shoumei, Ms. Zhang Xiuying, and Ms. Zhang Guiyun from Tonghe County were notified by the Yilan County Court on September 12, 2020, that they would be tried soon. They are being held in the Harbin City No. 2 Detention Center.

Ms. Sun Guichun, in her 60s, from Zhangqiu District was harassed at home by officers including Yan Defeng from the Shuangshan No. 1 Police Station on September 2, 2020. She was told to write a guarantee statement renouncing Falun Gong. The officers told her not to join Falun Gong and repeated Communist Party propaganda against the practice.

Ms. Sun stopped them from recording and videotaping the conversation and told them about the self-immolation hoax on Tiananmen Square and other facts about Falun Gong. She also gave a personal account of how she had benefited physically and mentally from practicing Falun Gong.

Ms. Sun’s non-practitioner husband, a retired teacher, received a phone call from the police on September 12. The police pressured him. He was so upset that he could not eat.

At the same time, the police also called and harassed Ms. Sun’s non-practitioner daughter, who worked out of town.

Ms. Li Zhendi was arrested in March 2020 for delivering Falun Gong materials in the Potou District. Her home was ransacked. She was tried by the Chikan District Court about two weeks ago. Ms. Li’s lawyer defended her innocence in the courtroom, and no verdict has been announced.

Zisong Community Residential Committee personnel called Ms. Huang Chenqiong and her family members several times and harassed them. They told Ms. Huang to go to the committee office to sign a statement renouncing Falun Gong. Ms. Huang refused. They phoned her husband and threatened to annul their family’s household registration and expel them from the community.

In addition, the families of Falun Gong practitioners, including elderly Ms. Yu's, have been harassed.

Mr. Jia Chunzhen, 74, and Mr. Song Zongxiao, 70, were arrested by officers from the Linxia County Police Department and the Xinji Town Police Station in February 2020. Their current whereabouts are unknown.

Both practitioners were sentenced to five years and four years in prison respectively in June 2012. They were held in the Tianshui Prison.

Ms. Yang Shujun and her sister Ms. Yang Shuhua from Chenghua District were harassed at their workplace in a barbershop by residential community personnel on September 9, 2020. These people did not show any work certificates that identified their positions. They disrupted the two sisters’ normal work.

Mr. Guo Chunhuai’s family received a phone call from the Xihe District Court on September 10, 2020. They were notified that Mr. Guo would be tried over video conferencing on September 18. Family members were not allowed to attend.

Mr. Guo was arrested by officers from the Beiyuan Police Station on November 16, 2019. He was held in the Xindi Detention Center.

Her home was ransacked, and a computer, printer, cell phone, and other items were confiscated. She was taken to the police department and then placed under police surveillance.

During the Two Sessions from May 13 to May 31, 2020 (the annual meetings of the People's National Congress and Chinese People's Political Consultative Conference), police officers and other personnel surrounded Ms. Yu's home to monitor her and harassed her every day. Ms. Yu subsequently left home and is displaced.

On August 19, the police forced her family to go to the police department and apply for bail pending trial for her and pay a 1,000-yuan deposit.

Ms. Wang Li, in her 70s, was arrested by officers from the Zhangying Police Station on September 4, 2020. She has returned home.

Ms. Liu Ruohan’s appeal against her five-year sentence was rejected by the Hebei District Court during a court session on August 27, 2020. She was taken to the Tianjin Women’s Prison.

Ms. Liu was arrested during a police sweep on December 3, 2018. It’s not clear when the first court sentenced her to prison.

Ms. Jiang Fengli was arrested at home on the early morning of October 14, 2019. The police came before she woke up. Her family was recently informed that Ms. Jiang had been sentenced to three years in Liaoning Women’s Prison.

Ms. Cheng Guiying and her sister, Ms. Cheng Guijing, were sentenced to eight and nine years and fined 40,000 and 50,000 yuan, respectively, on January 13, 2020, by the Nankai Court. The Tianjin No.1 Intermediate Court rejected their appeals and ruled to uphold their verdicts.

The two sisters were taken to the Xiqing Women's Prison in late August 2020. The procuratorate forced their families to pay the fines by threatening to freeze their pension accounts.

Mr. Yang Xuewen, 71, was taken to the Hulan Prison to serve 2.5 years on September 10, 2020. Mr. Yang was arrested with three other practitioners on July 16, 2019, for distributing informational materials about Falun Gong.

Ms. Zhang Guorong was released on May 16, 2020. Mr. Zhang and Ms. Li are still detained at the Anda Detention Center.

Ms. Qian Youyun and Ms. Sun Zuying were arrested on April 23, 2019, for talking to people about Falun Gong. Only months earlier, they had finished serving years in prison for their faith.

After more than one year of detention, they were tried by the Hongshan District Court through video conference at Dongxihu No.1 Women’s Detention Center on July 21, 2020. The judge sentenced both of them to two years in early August 2020. Both women have appealed the verdicts.

“Father and Daughter Both Sentenced for Their Faith”