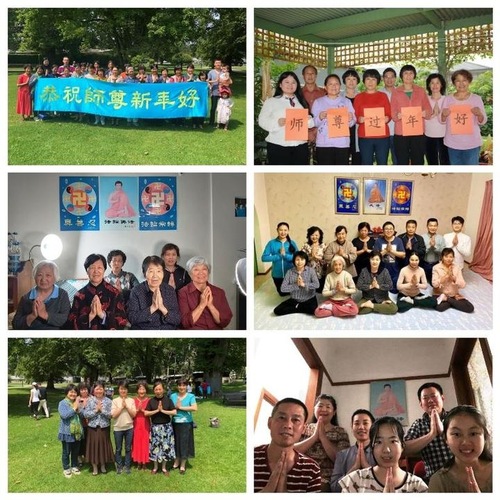 Melbourne practitioners wrote in their greeting, “Thank you, Master, for introducing Falun Dafa to the whole world and saving people. We will cherish this opportunity, cultivate diligently, and fulfill our prehistoric vows!”

“It's such a great honor to practice Falun Dafa”

Yanti Gunawan is an elderly practitioner from Indonesia. She said that in 2005 a colleague told her about Falun Dafa, so she borrowed a copy of Zhuan Falun.

She said, “I read very slowly, so it took me an entire week to finish the whole book. I developed flu-like symptoms. In Zhuan Falun Master talked about eliminating karma, so I didn't take any medicine and I was fine.

“As a child, I was taught to be kind and that we need to be truthful and tolerant. People are rewarded when they do good things; doing bad brings one hardship, etc. So Master's teachings in the book resonated with me, and I decided to practice.”

Yanti said, “It's such a great honor to practice Falun Dafa and have the affinity to be here with Master. I wish Master a Happy Chinese New Year!”

“All the cells in my body are in bliss”

Mr. Chen, age 62, moved to Australia in 1986. He feels honored to have obtained the Fa in May 1997. He said, “The Falun Dafa exercises gave me a healthy body while the Fa principles help me understand how to be a truly good person-I feel uplifted both physically and spiritually.”

As an engineer, Mr. Chen is used to thinking abstractly so he accepted the concept of higher beings and gods. He said the first time he read Zhuan Falun, “No words can describe the excitement I felt. These were things I had been thinking about for a very long time but they were answered all at once.”

After becoming a practitioner Mr. Chen felt so much joy. He said, “My happiness is indescribable, all the cells in my body are in bliss.”

“Since childhood, I had serious rhinitis. The doctors couldn't do much. I also suffered from hay fever. After I began practicing my rhinitis and hay fever disappeared. I work for a construction company and my colleagues are very envious of my strong and healthy body.”

Mr. Chen joined the Melbourne Tian Guo Marching Band in 2015 and plays the bass drum. The only music foundation he had was his love of singing. In just 4 months he went from not being able to differentiate between the rhythm for every song to being able to pass the band tests and perform in parades.

Mr. Chen said, “It was a cultivation process. In order to have time to practice, I slept very little. If it weren't for righteous thoughts and the energy from being a cultivator, it would have been impossible. I feel my experience shows the power of Dafa. My experience also validates that Dafa can broaden the wisdom of a cultivator.”

Speaking of Master's benevolence he said, “No words can describe my gratitude towards Master. I wish Master a Happy New Year!”

Sixty-year-old Ms. Liu has gone to the Melbourne tourist attraction for years to clarify the truth to Chinese people and persuade them to quit the Chinese Communist Party (CCP) and its youth organizations.

She clearly remembers when she first heard about Falun Dafa and began practicing. In March 1999 her sister (a practitioner) gave her a recording of Master’s Fa Lectures in Jinan. When she heard Master talk about how everyone has their own fate, she was deeply moved. She said, “I finally found the answer to something that troubled me for years-why my life was so different from my siblings and cousins despite coming from similar backgrounds. I couldn't help crying when I realized that I finally found the answer to my question about a person’s fate and I found a true Master who could resolve my questions.”

“When I first began practicing I made use of every possible opportunity to read Zhuan Falun. I read three or four lectures every day,” Ms. Liu said.

After she read Zhuan Falun in about three days, Ms. Liu discovered that all her ailments disappeared. “I did not practice to cure my ailments. After I read Zhuan Falun however, my rheumatism, bronchitis, sinusitis, thick blood and piles from giving birth which I had been suffering from for years, all amazingly disappeared. My body felt as light as a feather!”

“Before I began practicing, if I felt I was right I had no compassion or mercy for anyone who didn't agree with me. In Zhuan Falun Master talks about not retaliating, so I followed the principles of Truthfulness, Compassion and Forbearance to cultivate my xinxing and be a good person. I also participated in activities to tell people about Falun Dafa and the persecution.”

Ms. Liu said, “My friends say that after I began practicing I'm cheerful and smiling. I no longer speak at the top of my voice or insist that I'm right.”

What surprised the other practitioners was that Ms. Liu was able to sit in the double lotus position to meditate for 45 minutes within just two months.

“Now I read two lectures and memorize and recite Zhuan Falun every day so that I can engrave the Fa principles in my heart. This way, whenever a conflict occurs I remember the Fa's principles. I look inward first and I know what I should do as a cultivator.”

Ms. Liu concluded, “I am really grateful to Master and Dafa to have this affinity to exist with Master at this time. I feel so lucky. I can only cultivate myself well and clarify the truth to save more sentient beings in order to repay Master for what he's done for me. I wish Master a Happy Chinese New Year!”