(Minghui.org) Numerous greetings have been sent to Master Li to wish him a happy Chinese Near Year. Among the well-wishers are supporters of Falun Dafa, many of whom have seen their health improved and/or dangers averted. They attribute their miracles to their support of Falun Dafa. They thank Master Li for blessing them and giving them a better life.

Below are a few such stories. 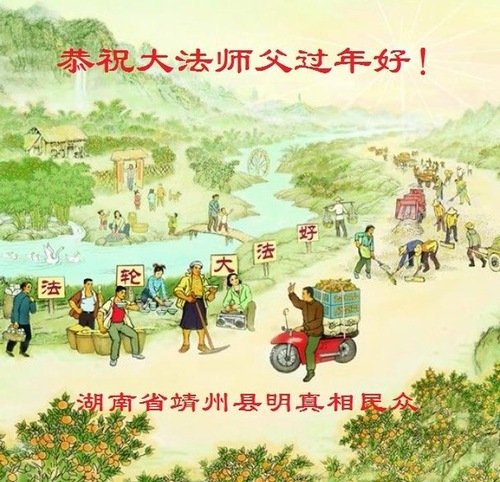 An Elderly Man: “Only Falun Dafa Can Change People's Hearts”

I am a 75-year-old man living in a remote village in Jingzhou County, Hunan Province. I served in the navy when I was young. After retiring from the military, I worked as a village official for several years.

I came across a few Falun Dafa practitioners who told me about the Chinese Communist Party's illegal and ruthless persecution of their faith. They gave me three books to read, including Nine Commentaries on the Communist Party, The Ultimate Mission of Communism, and The Devil is Ruling Our World.

The books helped me understand why people's morality has gone downhill since the CCP began ruling China. I realized that the CCP has destroyed the traditional Chinese culture and distorted people's minds. No wonder many people do evil without concerns for consequences.

I recalled what I had experienced over the years that had bothered me.

There is a river outside my home, and I once saved a pregnant woman and a child from drowning. Yet instead of thanking me, their families tried to blame me for their accidents and extort money from me.

When I saw several sheep grazing a villager's crop, I rushed to tell the crop owner to shoo away the sheep. He suspected it was my sheep (when it was not) and accused me of trying to shift blame to others.

A neighbor asked me to give him some green fodder, and I said I'd give him some if I had any extra left after I fed my pigs. To my shock, he spread fertilizer on my fodder and killed it all several days later.

I decided to not behave like the fellow villager or neighbor. I vowed to be a better person myself after talking to the few Dafa practitioners and reading the three books they gave me. I also often recited “Falun Dafa is good” and “Truthfulness-Compassion-Forbearance is good.”

African swine fever swept our village this year, yet my livestock did very well, and I also had very good harvest. I had no doubt that I had been blessed by my support of Falun Dafa.

I trust that only Falun Dafa can change people's hearts, and I plan to share my story with more people and hope they can also benefit from supporting Falun Dafa.

As we celebrate 2020 Chinese New Year, I wish Master Li a happy holiday!

I am a 49-year-old resident in Henan Province. I have six siblings, and my older sister's family was the first one to hear about Falun Dafa. Her husband's three siblings all practice Falun Dafa, and they often reminded her and her husband to recite “Falun Dafa is good” and “Truthfulness-Compassion-Forbearance is good.” My sister, 53, in turn told me and our other siblings about the practice. Many people in our extended families have benefited from supporting Falun Dafa.

My sister's daughter was found to have a malignant tumor in her bone marrow in 1998. My sister's husband's brother read Zhuan Falun to my niece before her surgery. After the operation, the surgeon said he accidentally injured a nerve, and that my niece would become paralyzed in one leg or arm. But my niece turned out to be totally fine, and she went on to obtain a bachelor's degree. She is now a healthy young professional.

My sister's husband's nephew suddenly vomited blood and lost consciousness in 2006. He was diagnosed with late-stage liver cancer. My brother-in-law knew that only Falun Dafa could save his nephew. He kept reciting “Falun Dafa is good,” and asked his nephew to do the same when the young man came to. The nephew miraculously recovered a few days later.

My brother-in-law got a big project in 2007. Before that, his business was barely breaking even, and he only managed to make ends meet. The project soon took off, and he became a multi-millionaire in just a few years. He often said that he wasn't the smartest, but that he was blessed by Falun Dafa.

My sister brought her then-six-year-old son to see me in 2009, so we decided to visit our mother together. I hopped on my electric tricycle, with my sister, her son, and my then-three-year-old daughter sitting in the back. As I just crossed a bridge and was driving uphill, the tricycle suddenly stopped and soon began to back onto the bridge. I was so terrified that I didn't know to step on the brake. There was no railings on the bridge, and before we knew it, one of the tires got suspended at the edge of the bridge. Suddenly the tricycle miraculously stopped, and we all got off safely. My sister revealed that she had been reciting “Falun Dafa is good” and “Truthfulness-Compassion-Forbearance is good.” I knew that Falun Dafa saved all four of us.

I was riding my motorcycle in 2010 with my then 79-year-old mother in the back seat when I approached train tracks and suddenly heard thunderous train sirens. I was so startled by the siren that I lost control of my bike. My mother was tossed off the motorcycle and hit the ground face down. Blood immediately came out of her hands.

Two women came over and helped my mother up. It turned out they were Falun Dafa practitioners. They advised my mother to recite “Falun Dafa is good” and “Truthfulness-Compassion-Forbearance is good,” and and gave us a DVD with Falun Dafa information.

Upon returning home, my mother rinsed her wounds, and did not see a doctor or use any medicine. The wounds healed in just a few days.

Our whole family thanks Master Li and we wish him a happy Chinese New Year!

Stories of A Migrant Worker in Tianjin

I was a farmer in Sihong County, Jiangsu Province and later went to Tianjin to do odd jobs. In Tianjin, I came across a few Falun Dafa practitioners who advised me to quit the CCP and recite “Falun Dafa is good” and “Truthfulness-Compassion-Forbearance is good.” I heeded their advise and was blessed.

I suddenly contracted shingles in June 2019 and became very scared of this hard-to-treat disease. I then remembered to recite “Falun Dafa is good” and “Truthfulness-Compassion-Forbearance is good.” The shingles were gone in two weeks.

It was a common problem for migrant workers to be paid late or even receive no payment. My foreman hadn't paid me for more than two years. I went to various government agencies, only to be given run-arounds. I consulted a lawyer, and he suggested that I “make some big noise.” But a practitioner advised me against using any violence, as every life is precious. He reminded me to recite “Falun Dafa is good” and “Truthfulness-Compassion-Forbearance is good.” I calmed down and heeded his advice. To my surprise, my foreman paid me what he owed me, nearly 200,000 yuan in total, just a few weeks later.

I am a truck driver in Yueyang City, Hunan Province. My sister practices Falun Dafa. When she was detained, I kept her Dafa books and materials safe, and I often visited her in detention. I was in turn blessed.

About seven years ago, my coworker and I drove a truck to Hubei Province. As we arrived at our destination, I got off the truck to guide my coworker to back-up the truck. A sedan suddenly came out of nowhere and drove right onto me. I weighed about 160 pounds at the time, and jumped up without thinking. I landed right on top of the sedan's windshield. The sedan driver saw me and stopped abruptly. The force tossed me off the hood and I remember thinking “I'm going to die” before passing out. When I came to, my hands and face were bleeding, and there were pieces of shattered glass on my face. The sedan driver took me to a hospital and the doctors found that except for external injuries on my face and hands, I had no internal injuries at all.

I was driving past a construction site last year when there was sudden power outage, and the crane stopped working. The crane cable dangled in the high winds like a pendulum and it swung over and hit my truck, shattering the windshield right above my head. I had to brake so abruptly that the tires screeched and smoked. If the cable had been just a bit lower, it would have hit my head.

I know that Master Li protected me from these two terrible accidents. I thank Master Li!