(Minghui.org) Falun Gong practitioners in Ukraine held activities in Dnipro on January 10-12, 2020, to introduce Falun Gong to the public and collect signatures on a petition calling for ending the Chinese Communist Party's (CCP) persecution. Despite the cold temperatures, many people stopped to find out more about Falun Gong and show their support. 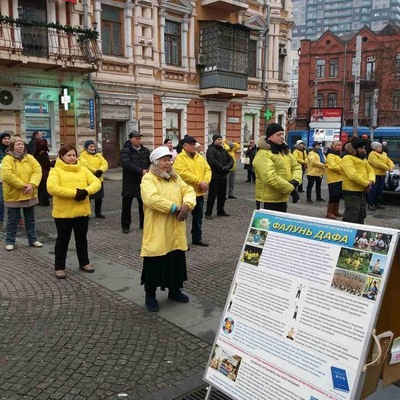 A local resident talks with a practitioner. 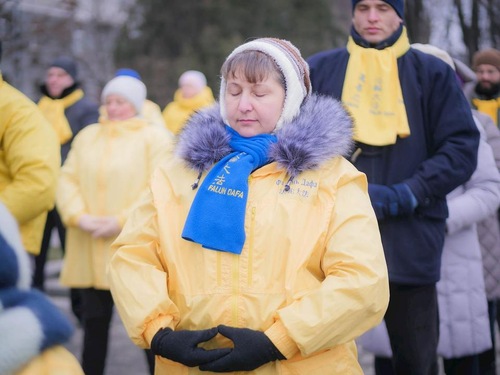 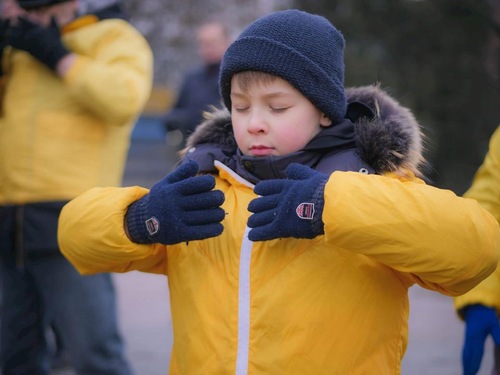 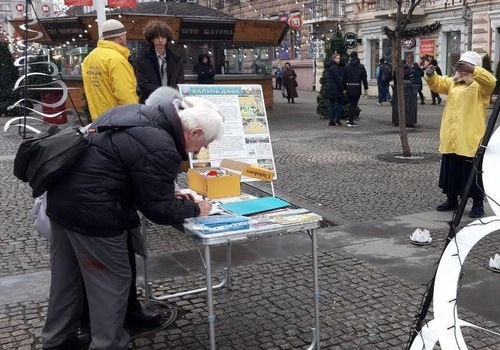 Practitioners collect signatures for the petition.

A coach and his team happened to pass by the Falun Gong booth. They took a group photo, with the practitioners doing the Falun Gong exercises as the background. A practitioner briefly introduced Falun Gong to them. The coach replied, “Yes, Truthfulness-Compassion-Forbearance are indeed the superior principles that people should follow.”

A local senior initially told a practitioner she didn't believe in anything, because the world had become so bad. A practitioner told her, “I believe in Truthfulness-Compassion-Forbearance. I hope that people will become righteous and tolerant, and never fight or abuse each other. We will be happy at that time.” The woman agreed. She talked more with the practitioner and asked about the purpose of the signature collection. “I would like to sign,” she said. “We shouldn't let evil live in this world!”

A man named Alexander and his mother watched the Falun Gong practitioners do the exercises together in a large group. A practitioner explained the principles and some of the benefits of practicing Falun Gong. Alexander asked about the health benefits with great interest. The practitioner gave him more examples of how people's health has improved through practicing Falun Gong, and also told him how to read the book Zhuan Falun online. Alexander's mother said, “That would be the best! Everything is arranged by destiny.”

A woman who approached the practitioners to find out more about Falun Gong, said after chatting with a practitioner, “If everyone could be kind, the world around us would become warm and compassionate!” She took some introductory materials about Falun Gong to read.

The three-day event allowed many people to learn about Falun Gong and express their support.

“Targeted in a Group Arrest, Shandong Woman Sentenced to 7.5 Years for Her Faith”