Gratitude from Toronto Practitioners to Zhuan Falun and Master Li

(Minghui.org) As Chinese New Year approaches, Falun Dafa practitioners in Toronto gathered to celebrate. In sharing how they have improved through reading Zhuan Falun, the main teachings of Falun Dafa, they expressed their gratitude to Mr. Li Hongzhi for introducing the practice to the public. 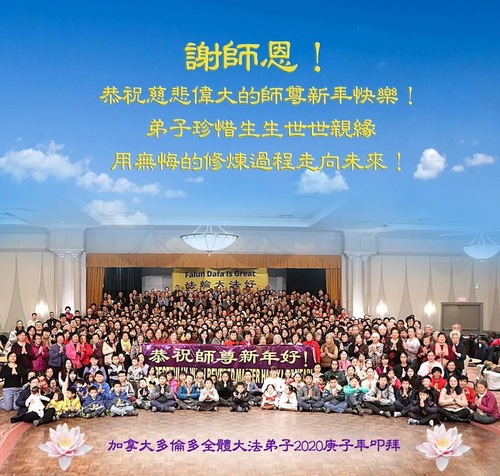 From Reading to Memorizing

Mr. Xu Gaofeng, who works on sales for a news media company in Toronto, began to practice in 1998. “I first saw the book Zhuan Falun at the home of my sister-in-law. Through reading I learned the importance of improving mind nature in addition to doing exercises,” he recalled, “I also witnessed how practitioners around me benefited from the practice, both physically and spiritually.” 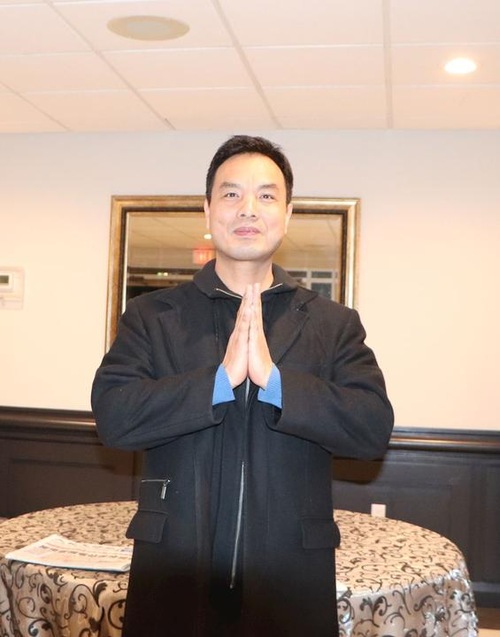 Several months later, the Chinese Communist Party (CCP) began to suppress the group, leaving Mr. Xu in confusion. With help from Master Li, however, he regained confidence and continued to practice. Since three years ago, he began to memorize Zhuan Falun, hoping to making more progress in xinxing improvement.

After leaving China in 2002, Mr. Xu has spent most of his time working for news media companies. Occasionally, he would encounter pressure and frustration at the workplace. One day when memorizing Zhuan Falun, he saw the following paragraph:

“An ordinary person cannot see this point and always believes that he should do exactly what he is able to. Therefore, he competes and fights all his life with a badly-wounded heart. He might feel very bitter and tired, always finding things unfair. Being unable to eat or sleep well, he feels sad and disappointed.” (Lecture Seven, Zhuan Falun)

From these words, Mr. Xu realized that his dissatisfaction with his business partner was caused by jealousy, and that his frustration over the client’s unfair feedback was also related to jealousy. “One may think of himself as being capable or successful. But as long as jealousy exists, it would be a big hurdle for a practitioner,” he explained.

After that, Mr. Xu decided to face these issues and fundamentally address his own problems. “Therefore, I was able to continue with my sales work with full confidence,” he said. Comparing to the person who he used to be, Mr. Xu said Falun Dafa purified his mind and body, making him healthier and more positive. “That is why I am grateful to Master for the constant help from Zhuan Falun,” he added.

Impressed by his changes, Mr. Xu’s parents, wife, and mother-in-law also became practitioners. “Especially my parents, both of them had many illnesses. All of their problems disappeared and my parents look much younger than their peers. As Chinese New Year is coming, my entire family is thankful for the blessings brought by Zhuan Falun,” he said.

Project Manager: Helping Me All Along

Annie Chung, an immigrant from Hong Kong from about 30 years ago, began to practice Falun Dafa in March 1999. Working as a project manager in legal affairs for a pharmaceutical company for over 10 years, she said that the teachings of Falun Dafa has helped her all along. 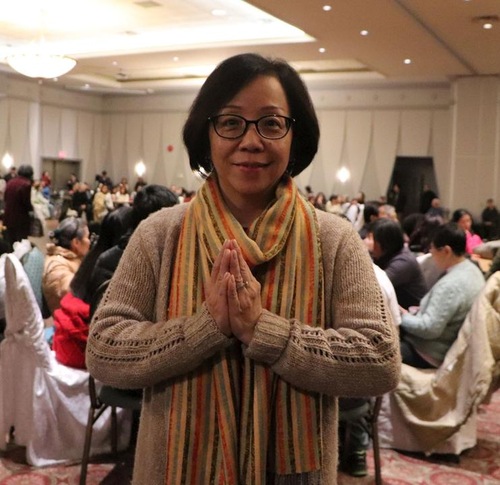 Annie Chung, project manager at a pharmaceutical company, started to practice in March 1999.

It started with her husband’s cousin, who was diagnosed with liver sclerosis many years ago and could not find a cure. “One day in 1997, he saw people doing Falun Dafa exercises at Victoria Park in Hong Kong and joined the practice. An examination several months later showed his liver had completely recovered. Because of this miracle, many members of my husband’s family in Toronto, as well as some in Hong Kong and France, began to practice too,” she recalled.

One of them gave a copy of Zhuan Falun to Chung in late 1998, who put it aside at the time. One day in March 1999, she could not go to work due to sickness and began to read the book. “I was very touched for two reasons: one was that the book resolved a confusion that had been bothering me for five years and another was the book convinced me—someone who always believes in science—that this is true wisdom,” she said.

Chung’s elder brother, a really nice person that she has always admired, died of cancer in 1994. She could not understand how such as a good person could leave this world so early while enduring so much pain. “The book of Zhuan Falun explains to me where karma and illness come from. The confusion that had plagued me for five years was thus resolved,” she explained.

Chung found Zhuan Falun to be very profound and deep, and she decided to become a practitioner. Several months later, the CCP began to suppress the practice and many overseas news media also carried defamatory propaganda from the CCP, but Chung said that she was not disturbed at all.

“I have witnessed how the CCP deceived people in the past, so I never trusted it in the first place. Plus, there are so many practitioners around me who are nice people and good citizens of society,” she added.

Looking back at her cultivation over the past 21 years, Chung said she had made significant progress letting go of selfishness and personal attachments. Nonetheless, the principles of Falun Dafa have constantly helped her to do better and better. “That is, the book Zhuan Falun has helped me along the way, whether it was for my own benefit, or helping me tell others about the practice to dispel hate propaganda from the CCP,” she explained.

Ms. Wu Yanxia began to practice Falun Dafa in late 1996. Before that, her husband had already become a practitioner. Seeing her husband spending lots of time reading the book, doing the exercises, and helping to introduce the practice to more people, Ms. Wu was a little upset.

One day, she got the chance to go with her husband to an experience-sharing conference. Upon hearing them discussing how they followed the principles of Truthfulness-Compassion-Forbearance to become better people, she was very touched. “I was a CCP member at the time and often attended all kinds of meetings. But this environment was different—although no one was watching them, they each tries to be considerate of others, which was really amazing,” she recalled. 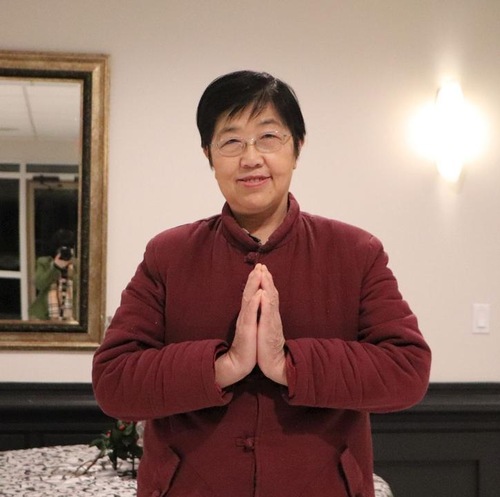 Ms. Wu Yanxia heard about Falun Dafa from her husband.

Curious about what her husband had been studying, Ms. Wu decided to read the book too. She was deeply moved by how Falun Dafa teaches one to look within and improve mind nature. In addition, she was touched by Master Li's words in the book:

She could feel the tremendous compassion between the lines. “I could accept it, but I also know it is not easy to achieve, which, to me, is the process of cultivation practice,” she said.

Having memorized Zhuan Falun twice, Ms. Wu said that she now has a better understanding of endurance and forgiveness as described in the book. “I also realized that being an upright person in this world is different from being a practitioner. A practitioner is able to broaden his or her heart, and become compassionate to everyone,” she added. 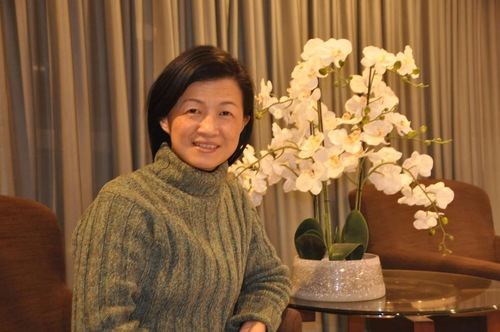 Elaine said that deciding to practice Falun Dafa was a life-changing moment for her.

Elaine works in marketing for a news media in Toronto, and she became a practitioner 21 years ago. Her coworker gave her a copy of Zhuan Falun. After reading the following words in Lecture One, she was very touched,

“To tell you the truth, the entire cultivation process for a practitioner is one of constantly giving up human attachments. In ordinary human society, people compete with, deceive, and harm each other for a little personal gain. All of these mentalities must be given up. Especially for people who are studying the practice today, these mentalities should be given up even further.”

Impressed by the book's clarity and conciseness, Elaine said that she has learned a lot from it. From physical improvement to the uplifting of mind nature, she experienced many things that were described in the book. To further align with the principles of Truthfulness-Compassion-Forbearance, she decided to memorize the book.

During this process, she gained further understandings of becoming selfless and letting go of demonic nature. When memorizing Zhuan Falun for the second time, the interference was strong and it was hard to concentrate. “Somehow Master helped me and right after finishing another paragraph, I felt as if sunshine had pierced the clouds: My mind was clear and I regained righteous thoughts as well as clarity. From that I could see through the tribulation I was in and be able to overcome it,” she said.

Jailed 10 Years for His Belief 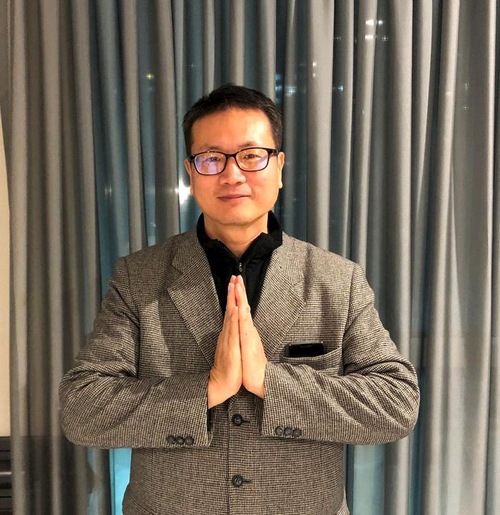 Mr. Fu Lulin was imprisoned for 10 years because of practicing Falun Dafa.

Mr. Fu Lulin began to practice Falun Dafa in 1996 and because of that, he was imprisoned for 10 years starting from 2001. Several years later, he was able to leave China and arrive in Canada.

“Zhuan Falun helped me understand me the purpose of life—that is, becoming a better person and returning to the origin,” he said. When first beginning to practice, he worked in sales for a foreign firm and was often on business travel. “Although there were many opportunities for me to take advantage for personal gain, I always turned them down because I knew what it meant to be a Falun Dafa practitioner,” he said.

After being jailed for his belief, he had a wish to study the Falun Dafa principles during detention. Somehow, a practitioner gave him a Micro-SD card, which had the audio lectures from Master Li on it. “Every night, I inserted the card into my MP4 device to listen to it. During the day I would recollect what I had learned and tried to recite it,” he said.

The audio lectures helped him a lot to act according to the Falun Dafa principles. This includes remaining determined in cultivation, opposing persecution such as forced labor, and helping others. One day, an inmate was severely ill, but the officials offered no medical treatment. Ms. Fu told him the facts about Falun Dafa and reminded him to recite “Falun Dafa is good” and “Truthfulness-Compassion-Forbearance is good.”

The inmate followed his advice. “After some time, he fully recovered and was very grateful to Falun Dafa,” said Mr. Fu.