They shared experiences about cultivating their character according to Truthfulness-Compassion-Forbearance and encouraged each other to continue to improve diligently. 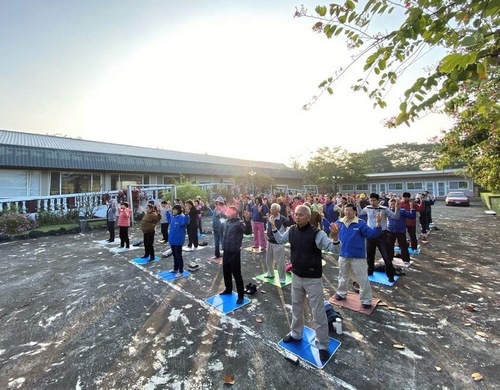 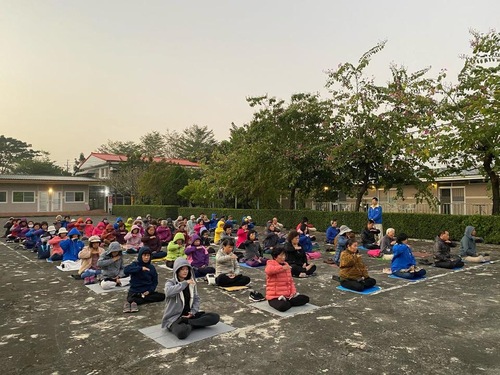 Falun Dafa practitioners do the exercises in a group in the early morning.

Practitioners did the exercises and studied the Fa in a large group. They also held discussions in smaller groups. By sharing their personal experiences and listening to the experiences of others, practitioners looked inward to find their fundamental attachments and correct themselves, uplifting their xinxing.

“Truthfulness-Compassion-Forbearance Brings Peace to My World”

Ms. Zeng said that she had learned how to be a compassionate, sincere and tolerant person through practicing Falun Dafa. She felt she was no longer so calculating over her personal interests, and thus lived a much more relaxed life. She believed that if everyone would start by changing their own behavior and being more tolerant and considerate, it would create a ripple effect and bring peace and warmth to the world.

Jinzhi from Hengchun Township shared an experience she had of breaking through a sickness karma test. Soon after she started practicing Falun Dafa, more than 10 years ago, she encountered a bottleneck in her cultivation. Her daughter's wedding was approaching, but Jinzhi felt really ill and had to receive an IV drip in the hospital. The day before her daughter's wedding, it suddenly dawned on her that she was a Falun Dafa cultivator. She asked to be discharged, went home and took a shower, and sent forth righteous thoughts. When she woke up the next day, she felt well and clear-minded, as if nothing had happened. She was filled with gratitude to Master. Her quick recovery allowed her to attend her daughter's wedding happily. “Dafa surely creates wonders,” Jinzhi said.

No matter how hard it can be to get up early and do the exercises, Jinzhi has told herself that it is a rare and precious opportunity to cultivate in Dafa. “Since I'm fortunate to obtain Dafa, I must persist in my cultivation,” she said. She has thoroughly appreciated the joy of cultivation for more than 10 years.

Never Slacking Off in Cultivation

Zhaoxiang has been cultivating for three years. She said that she has found that the only way to keep a good state physically and spiritually is to do all of the three things well.

She recounted a lesson that she had experienced in her cultivation: “I didn't participate in group exercises or study, because of my busy work and family life. I really didn't do the three things well.”

She experienced a serious sickness karma test a couple of years ago. It was so bad that she couldn't even read Zhuan Falun. Practitioners who were helping her through the test suggested that she listen to Master's lecture recordings and send forth righteous thoughts intensively. Her symptoms were gone after three days.

“I realized how serious and urgent cultivation is. I will never slack off in my cultivation again,” she said.

Zhaoxiang now does her best to participate in group study and group exercises and feels that she has gained a lot by doing so. She said she can concentrate much better when studying the Fa and sending forth righteous thoughts now. She also makes phone calls to mainland China every day to clarify the truth about Falun Dafa to Chinese people who were deceived by the regime. Her time is well spent on making diligent progress in cultivation.

“Master Saved Me from Two Strokes” 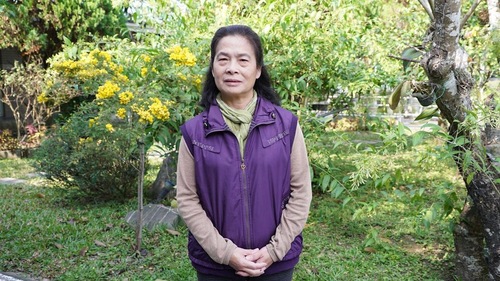 Suxiang is a businesswoman who trades in gold and silver jewelry. She has been cultivating in Falun Dafa for 19 years. Fifteen years ago, an employee of an insurance company stole her total life savings of 18 million Taiwan dollars. When she heard the news, she had a stroke on the spot. She was rushed to hospital. After she regained consciousness, half of her body was paralyzed and her mouth was crooked.

“My only thought was that Master could save me. I believe in Dafa and Master, who is the only one who could save me.” Despite the doctor's and her daughter's objections, Suxiang insisted on leaving the hospital.

As soon as she returned home, Suxiang listened to Master's lectures and did the meditation exercise with a calm mind. She found she could drink water and lift her hand after listening to two lectures. She tried and was surprised to find that she was also able to walk. Compassionate Master had restored her health so quickly.

Suxiang sought compensation from her insurance company. With her brother's help, Suxiang got 12 million dollars back, but the company wouldn't pay the rest. She recounted, “I was always thinking about how to get the other 6 million back. I felt it was so unfair.”

One day during a vacation, she had a second stroke. It made her realize her strong attachment to money. At the moment she had the stroke she heard Master's voice, “If you get your money back today, are you able to spend it, given your health situation?” She regretted her attachment so deeply that she cried out, “Master, I'm wrong! I'm wrong again! Please save me!”

“I cried while doing exercises that night. In the morning, my body returned to normal again. All of the stroke symptoms were gone. My family and friends were all amazed by the miracle of Falun Dafa!”

Suxiang gained a better understanding of the Falun Dafa principles after having two strokes. “I used to work hard to make money, but I forgot my mission. I didn't actively participate in the three things. I thank Master for teaching me how to let go of my attachments to fame and fortune!”

“From Supporting Mother's Practice to Becoming a Falun Dafa Practitioner Myself”