(Minghui.org) Today's news from China includes incidents of persecution that took place in 9 cities or counties in 5 provinces, where at least 11 practitioners were recently persecuted for their belief. 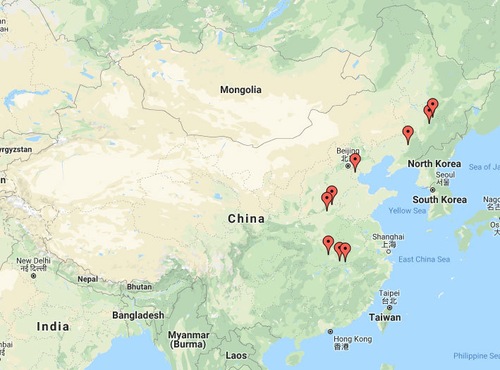 Mr. Wei Yuexing was reported to the police for talking to people about Falun Gong on the afternoon of December 24, 2019. He was arrested by officers from Criminal Investigation Division, Wenfeng Police Department. He is being held in Anyang City Detention Center.

Ms. Chen Meiyu, who works at Qichun County People’s Hospital, was reported to the authorities for talking to people about Falun Gong. The county's Party Committee Office called the hospital to investigate the matter. The hospital president talked to Ms. Chen. Her family was afraid that she would be persecuted, and took her to a mental hospital on September 19, 2019, where she stayed for 11 days.

On September 21, four officers from the county Domestic Security Division went to Ms. Chen’s home to arrest her but she was not there. The officers went to People’s Hospital, and told the hospital officials to punish Ms. Chen severely.

Four or five officers from the Xin’an Police Station, Longtan District, broke into 85-year-old Mr. Guo Yunian’s home and ransacked the place on the morning of July 19, 2019. They confiscated Falun Dafa books, DVDs, tapes, and about 5,000 to 7,000 yuan in paper bills with Falun Gong facts printed on them. They also extorted 2,000 yuan from Mr. Guo. Mr. Guo was taken to Jilin City Detention Center that day. He was released after the detention center refused to admit him.

Around the beginning of November 2019, the court notified Mr. Guo that a trial was coming up. Mr. Guo recently received a verdict and he was given a six-year prison term.

Mr. Nie Tan and Mr. Shao Baoqing from Songlin Village, Ping’an Town, were taken to the police station to sign paperwork on the afternoon of December 24, 2019. They were released around 7:00 p.m. that evening.

Officers from Huangzhuang Township Police Station, Wuqing District, broke into Ms. Ma Qingxia’s home and ransacked the place on the afternoon of December 5, 2019. They confiscated Falun Dafa books, photos of the founder of Falun Gong, Chinese New Year paintings, and over 10,000 yuan in cash.

Ms. Ma was officially placed under arrest, and is being held in the detention center. The police are also looking for her mother-in-law Ms. Wang Junxia, who stayed away from home to avoid being persecuted.

Ms. Zhang Lijuan from Lishi Sub-district was given a one-year prison term by Wanghua Court. She was taken to Liaoning Women's Prison in October 2019. Her daughter went to the prison three times, but she was not allowed to see her mother.

Officers from Huixian City Domestic Security Division and Mengzhuang Town Police Station went to Ms. Liu Fenglian’s home in Lugu Village and arrested her on the morning of December 19, 2019. They also went to Ms. Liu Furui’s home in Zhanjiangtun Village, Changcun Town, and arrested her. The officers ransacked their homes, and confiscated Falun Dafa books. Both practitioners are being held in the Huixian City Detention Center.

Ms. Liu Jinhua was reported to police when she talked to people about Falun Gong on September 20, 2019. She was arrested by officers from Chengguan Police Station, Yunmeng County. She returned home after being held in the detention center for some time.

Ms. Jiang Lingxia was arrested at home by Tang Zengming and other officers from Susong County Domestic Security Division on the morning of December 5, 2019. She was taken to a hospital for a physical exam, and then taken to Susong County Detention Center, where she was detained for 15 days. She was released on December 20.

“Convincing a Police Station Director to Stop Participating in the Persecution”