Frankfurt: Clarifying the Facts of Falun Dafa at the Chinese Art and Cultural Festival

(Minghui.org) During the recent Chinese Art and Cultural Festival celebrated in Frankfurt, Germany, Falun Dafa practitioners, clarified the facts about the practice and the 20 year long persecution in China. Many passersby stopped to talk with practitioners, and signed the petition calling for an end to the persecution. 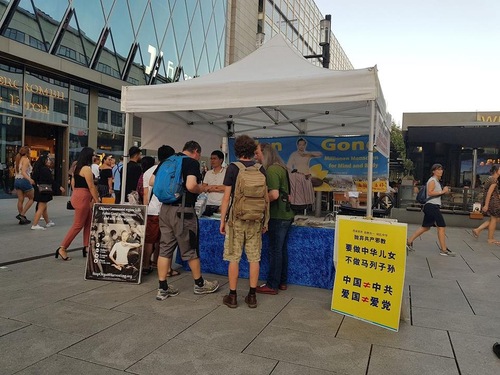 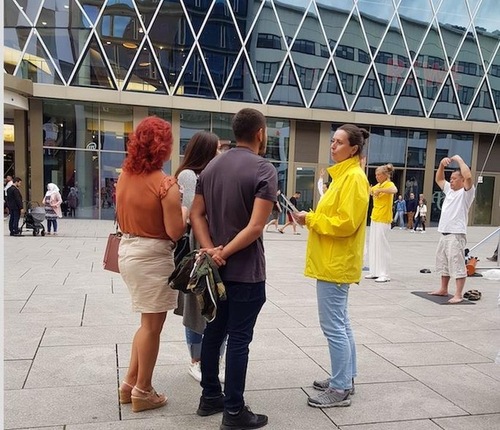 Passersby talk with practitioners at the Falun Dafa booth on August 31, 2019, to learn about the cultivation practice.

At Zeil Street, one of the most renowned and busiest shopping areas, Falun Dafa practitioners put up large posters, and handed out informational materials at a nearby booth between August 30 and September 1.

One middle-aged man said he had heard about Falun Dafa, and signed a petition to support the practitioners. “You are doing really great!” he praised, giving a thumbs-up, while referring to practitioners’ consistent efforts to expose the 20 year long suppression in China.

Hearing about the meditation for the first time, one middle-aged woman was curious why peaceful practitioners in China face harassment and torture. She was shocked upon hearing about the Chinese Communist Party's (CCP) defamatory propaganda campaign against practitioners. She also shook her head in disapproval as one practitioner explained the scope of the persecution, including the atrocity of organ harvesting from imprisoned practitioners in China, which was confirmed by an independent tribunal in London and other investigators. The woman was very disturbed, and said, “Only evil people would do something like this. I am certain that the CCP would be punished for that—it won’t last long.” When leaving the booth, she held the practitioner’s hands, while encouraging her to keep up her efforts.

Ilona, another passerby, talked with a practitioner for a long time. She thought greatly of the Falun Dafa principles of Truthfulness-Compassion-Forbearance. She said, “Our society would be a better place if more people could act that way.” Having read How the Specter of Communism Is Ruling Our World, a book from the editorial team of the Nine Commentaries on the Communist Party, she shared the information on Facebook and said it is important to follow traditional values. 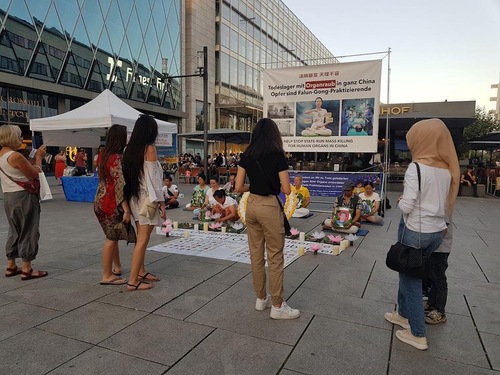 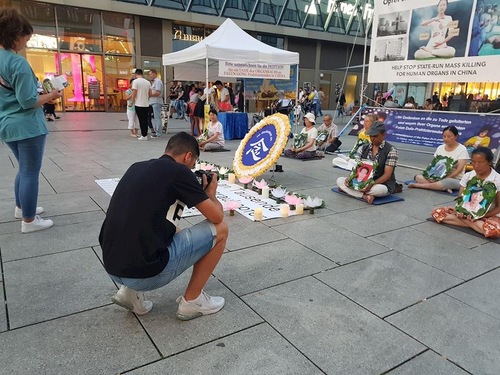 Pedestrians stop at the candlelight vigil, through which practitioners mourned those who have lost their lives during the persecution.

One Chinese business owner said he has lived in Frankfurt for more than ten years. He came to the booth and chatted with a practitioner. “In the past I thought Falun Dafa exercises were for seniors. But, I recently watched some online videos and surprisingly saw many young, successful professionals are practicing it too,” he said. Since then he had read Zhuan Falun, the main teachings of Falun Dafa, several times, and found the book very profound.

From political campaigns in the past to the ongoing persecution of Falun Dafa, a practitioner explained to the man how the CCP had harmed innocent people through violence and defamatory propaganda. The man provided his name and agreed to renounce his memberships in the Youth League and Young Pioneers, two junior organizations of the CCP. Another woman who accompanied the man also quit the CCP and its youth organizations.

Two older Chinese men said they have also lived in Frankfurt for over ten years. As they walked past the information, one practitioner told them about Falun Dafa. They said they had heard about it previously and watched activities arranged by practitioners in the city center. Both of them were willing to quit the CCP organizations. 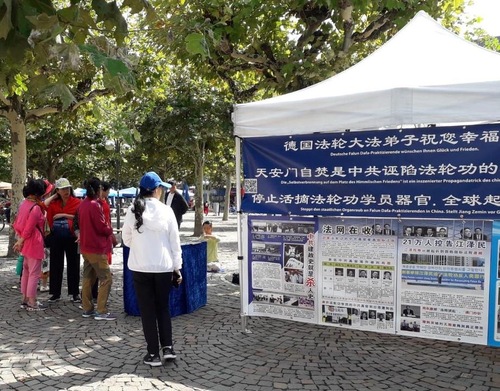 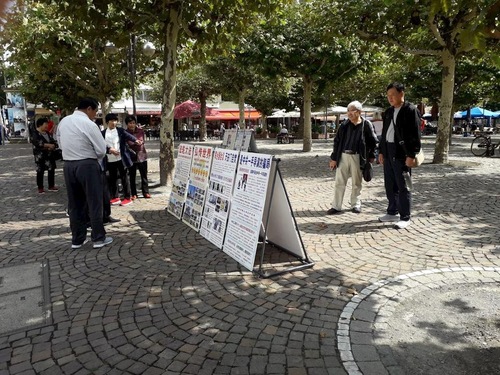 Chinese tourists read posters about the suppression of Falun Gong in China.

In addition to holding information sessions on Zeil Street, practitioners also went to Römerberg Square. Adjacent to St. Paul's Church, this public space is visited by hundreds of Chinese tourists each day, many of whom are greeted by practitioners. The practitioners display posters and distribute Falun Dafa informational materials.

Gianluca, a Western practitioner, came here with another practitioner on August 31. He showed the banners and posters to the Chinese tourists who were waiting for their bus, and communicated with them in simple Chinese. He said, “Please read this” and “The CCP does not represent China.” Some tourists were curious and read the information on the display boards. The practitioners also played audio broadcasts that debunked the defamatory propaganda spread by the CCP.

As a group of Chinese tourists were reading the posters, a female practitioner talked with one tourist explaining why a person should renounce their membership in the CCP organizations. The man nodded and replied, “I know, I know. Our tour group was in Vietnam before coming here—We quit the Party in Vietnam.”