Divinity of Chinese Culture in the Remote Ages (Part 1): The Divine Power

(Minghui.org) In the Chinese culture of the past 5,000 years, the main theme was without doubt of divine connection, and was well preserved. It guides people’s everyday life, viewpoint of the world, and transition of dynasties.

This series focused on manifestation of this main theme during remote ages. They include the Xia Dynasty (about 2070-1600 BC), Shang Dynasty (about 1600-1046 BC), and Zhou Dynasty (1046-256 BC). Although very scarce, historical records and archaeological discoveries about these eras provide us a glimpse of how a foundation was laid for the glorious Chinese civilization.

Among numerous history books discussing remote ages, Shi Ji (The Records of the Grand Historian) was well known for its thoroughness and details. Written by Sima Qian in the Han Dynasty, these books covered the era from Huangdi (Yellow Emperor, in reign around 2600 BC) to Emperor Wudi of the Han Dynasty (101 BC). It was said that Sima spent 18 years, and finished the books at age 60, despite facing a number of obstacles. He wrote, “It aims to study the relationship between heaven and mankind, as well as history and current days, so that history can be explained and corrected.

Such an understanding was well received by other scholars at the time, as well as later generations. Dong Zhongshu, a scholar for Emperor Wudi, emphasized the connection between heaven and human beings. Shao Yong, philosopher and historian during the Song Dynasty, once wrote, “If one studies it, it cannot be called study.”

Even before the Xia, the first dynasty in Chinese history, divinity already existed in Chinese culture during the era of Three Sovereigns and Five Emperors. The Three Sovereigns included Suiren (inventor of fire), Fuxi (inventor of hunting and fishing), and Shennong (inventor of agriculture). Along with Huangdi, one of the Five Emperors who reigned afterwards, these forefathers were believed to either have divine capabilities, or could communicate with divine beings.

From the Xia to Zhou Dynasties, people in general believed in divinities. The exact term nonetheless varied from time to time, changing from di (Majesty) in Shang Dynasty to tian (divinity) in Zhou Dynasty. The divine beings were believed to have utmost power, needed to control society, and what affected its life, ranging from natural phenomena (wind, rain, thunder, lightning, crops) to individual’s wealth, as well as the change of dynasties.

During the Shang Dynasty, emperors and nobles not only took auspices, but also wrote down the results on bones. Inscriptions on these oracle bones were inscribed with the earliest form of Chinese characters, and they provided an invaluable tool to study culture at the time. From them we learned that people in Shang believed in both divine beings (such as those in charge of wind, rain, and thunder), and deities related to the land (such as mountains and rivers).

By the Zhou Dynasty, the term for divinity changed from di (Majesty) to tian (divinity). Emperors were also referred as tianzi (son of the divinity) beginning at that time. 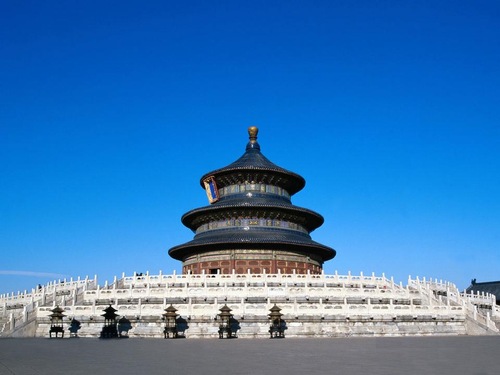 Tiantan (Temple of Heaven) in Beijing

Those who have been to Tiantan in Beijing know it is a place of worship. Built during the Yongle Period by Emperor Chengzu in the Ming Dynasty, it was a worship location for emperors in both the Ming and Qing Dynasties. The ritual of worshiping heaven by emperors, however, started as far back as the Zhou Dynasty. Considered the most sacred ceremony communicating with heaven, it occurred on the day of Dongzhi (winter solstice) in the southern suburb of the capital city. The ceremony intended to express gratitude towards heaven for the blessings concerning weather, harvest, and the society.

In addition to the ceremony in the capital, another type of solemn ceremony took place at Mount Tai called Feng Shan. Five famous mountains received special recognition in ancient China called Wuyue. Among them, Mount Tai (located in today’s Shandong Province) located in the east, was considered the most important. The ceremony of Feng Shan included two parts: worshiping at Mount Tai, to express gratitude to the heavens, and another ceremony at nearby Mount Liangfu – to thank the earth.

Feng Shan was probably the most sacred ceremony in history, and occurred only during dynasty changes, or when the nation reached long-term peace after turmoil. According to Guan Zhong living during Chunqiu (also known as Spring and Autumn period, an era between the Zhou Dynasty and the Qin Dynasty), there were 12 sages or emperors who had held the ritual of Feng Shan. They included the majority of the Three Sovereigns and Five Emperors, along with Yu the Great (founder of the Xia Dynasty), King Tang (founder of the Shang Dynasty), and King Cheng (second King of the Zhou Dynasty).

The purpose of Feng Shan was explained by Ban Gu, a historian in the Han Dynasty. “A dynasty changed, another era started, and long-term peace was achieved. Worship was thus held at Mount Tai and Mount Liangfu to show appreciation. Kingship was bestowed by heaven to govern the people. As success is celebrated, heaven is notified, and the credit is attributed to the divine.”

“True Cultivation Is Difficult to Achieve Without Changing Human Notions”