Story of Shennong and the Medicine King Festival

(Minghui.org) The ancient deity Shennong is well known and commemorated in China. He invented agriculture and taught people how to grow grains and differentiate herbal medicines. As a result, he was referred to as Shennong (deity of agriculture), Wugushen (deity of the Five Grains), and the king of medicine.

Shennong was one of the Three Sovereigns, who also included Suiren (inventor of fire) and Fuxi (inventor of hunting, fishing and domestication). These three sovereigns lived earlier than Huang Emperor (the Yellow Emperor), who reigned around 2600 BC. Shennong was also known as the Yan Emperor. The Chinese people traditionally consider themselves descendants of the Yan and Huang Emperors. 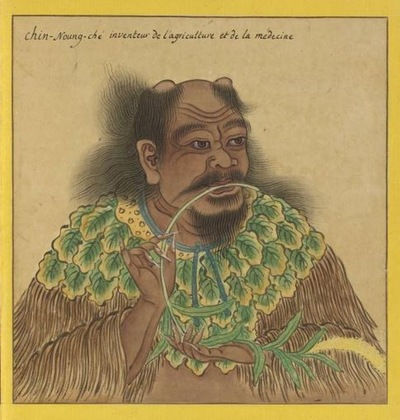 Illustration of Shennong, produced in the 18th century AD

The Medicine King Festival is a tradition that started in the Late Tang Dynasty (923-937 AD), and it occurs on Chunfen (the Spring Equinox). As one of the 24 solar terms in the traditional Chinese calendar, Chunfen refers to the day in the spring when the sun is right above the equator. Often occurring around March 21, it is the date when day and night equally divides and spring begins.

According to Ban Gu, a historian in the Han Dynasty, “Following laws from heaven and taking advantage of the land, Shennong made lei si (prototype of the plow) and taught people agriculture. He miraculously applied the technique for its wide use. That is why he was called Shennong (deity of agriculture).”

Hunting and fishing alone could not feed the growing population at the time. In addition, people gradually deviated from nature and their divine origin, causing the environment to deteriorate and illnesses to arise. Shennong tasted hundreds of plants and identified five common crops (later known as the Five Grains). By showing people how to use tools along with techniques for cultivating land, he introduced agriculture.

According to Huangfu Mi and other historians, Shennong grew up by the Jiang River (he thus had the surname of Jiang), a branch of the Wei River near the Yellow River. He taught people to grow crops instead of killing for food. Many people benefited from it on a daily basis, but they did not know where it came from.

Besides crops, Shennong also identified 365 herbs. Among them, 120 promote health, 120 improve the mind, and 125 cure illnesses. This was documented in the book of Shennong Ben Cao. Together with Huangdi Neijing, Nanjing, and Shanghan Zabing Lun (Treatise on Cold Damage Diseases), they are considered the four classic books in Chinese medicine.

One time when tasting herbs in Anren County in today’s Hunan Province, Shennong was poisoned and had a headache and dizziness. He casually pulled leaves from a tree next to a mountain spring as food. To his surprise, this eased his discomfort. Shennong named it cha (tea) and showed locals how to consume it.

Later on, when looking for more herbs at Yunqiu Mountain, Shennong accidentally ate heartbreak grass and died. People in the nearby regions were in deep sorrow, and they built Emperor Yan’s Tomb and Shennong Temple to commemorate him.

This tradition continued in later generations. Locals built Medicine King Temple and a statue for Shennong. For three days before and after Chunfen (about one week in total), people brought food, herbal medicine, and crops to worship him.

This gradually became a large-scale celebration and trading festival. People come from over 100 counties in more than 10 provinces for this event in Anren County for herbal medicine, various commodities, food, and entertainment.

“Cherishing The Opportunity We’ve Waited An Eternity For”