(Minghui.org) The Harvest Festival held in Sharon Springs, a scenic village in upstate New York, is one of upstate New York's largest two-day events. Although the town has a population of less than 650 people, the annual festival attracts nearly 20,000 visitors.

Falun Dafa practitioners participated in the 10th annual Sharon Springs Harvest Festival held on September 14 & 15, 2019. They introduced the mind and body practice to local residents and tourists, and informed them about the ongoing persecution in China. 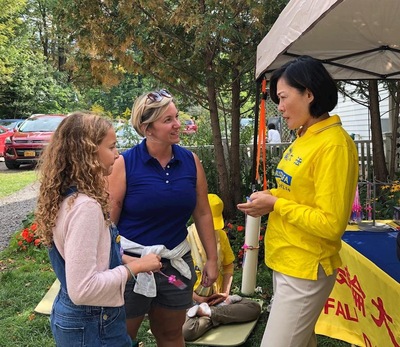 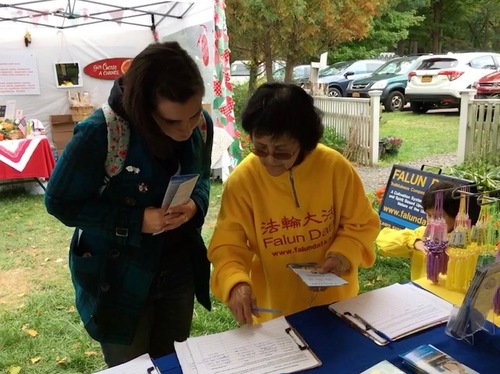 It was a cool autumn day on Saturday, September 14. As soon as practitioners set up their display, local residents who were already out and about stopped to inquire about the meditation practice.

A middle aged man listened quietly as practitioners told him about the state sanctioned harvesting of organs from Falun Dafa practitioners in China. He said he is a doctor, and he believes this is true. He signed the petition calling for an end to organ harvesting, and said he will follow the issue.

A man told practitioners after signing the petition that he will raise the issue of organ harvesting with New York Senator Chuck Schumer, whom he would be meeting with in the following week.

During the two-day event, practitioners met many people, including visitors from New York, Minnesota, Michigan, Texas and Maine. Some expressed interest in learning the exercises, while others signed the petition to show their support. It was a meaningful weekend for practitioners who cherished the opportunity to introduce Falun Dafa to many people.

“Reflecting on My Cultivation While Working in a Media Project”