(Minghui.org) Today's news from China includes incidents of persecution that took place in 12 cities or counties in 6 provinces，where at least 31 practitioners were recently persecuted for their belief. 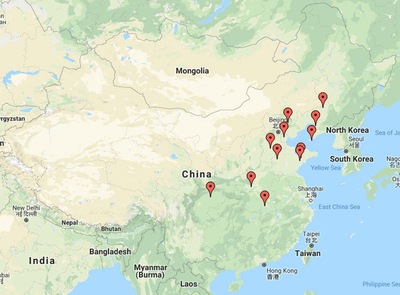 Ms. Zhao Qingbi, in her 60s, was arrested by officers from the Jialing Police Station in the Lizhou District, Guangyuan City, for distributing information about Falun Gong in Guangyuan on July 26, 2019. She was taken to the Xuefeng Detention Center, and officially placed under arrest on August 13 by the Lizhou Procuratorate.

Ms. Gao Qingjian from the Dagang District, Binhai New Area, was arrested at work on September 6, 2019. The police ransacked her home and confiscated a computer, printer, and ink. She was taken to the Xincun Police Station, where she was verbally abused, photographed, had her blood withdrawn, and fingerprints taken.

Ms. Duan Huiqin from the Dongli District was arrested outside her apartment building on the afternoon of September 8.

Ms. Liu Tonglian was arrested at her workplace by officers from the Chaoyang Police Station on the afternoon of August 15, 2019, when she was about to go on duty. Her home was ransacked and her Falun Dafa books, a notebook computer, tablet computer, printer, printer paper, and over 1,700 yuan in cash were confiscated.

She was held in the police station overnight, and underwent a physical examination at the Weifang Hospital the following morning. Ms. Liu was taken to the Weifang Detention Center the afternoon of August 16, and was released on August 24 after her family paid 2,300 yuan.

Ms. Gao Guiying and Ms. Li Xianglian were arrested on September 5, 2019, for talking to people about Falun Gong at the Boping Town Farmers' Market. They were taken to the Boping Police Station.

Si Xinhua and others from the Boping Comprehensive Management Office carried out the arrests. Both practitioners were held for seven hours.

Si and several others ransacked the two practitioners’ homes in Zhaozhuang Village, Boping that afternoon. They tore down all of the couplets on Ms. Gao’s door, and confiscated photos of the founder of Falun Gong from Ms. Li’s home. They then went to Ms. Li Guiling’s home in the village, and confiscated her Falun Dafa books.

Ms. Liu Yaqi from Xicaojia Village, Dianzi Town, was arrested by seven or eight unidentified people, who climbed over the wall and entered her home, on the morning of September 6, 2019. Ms. Liu’s whereabouts are unknown.

Eight practitioners in the Luanhe District were arrested on September 4, 2019.

Ms. Wang Guilan, Ms. Zhang Xiuyun, Ms. Heng Xiaofeng, elderly Ms. Zhao, and another elderly practitioner with the last name Li were arrested when they were studying the Falun Gong teachings together. Li and Ms. Zhao were released after they failed the physical exam.

Ms. Shang Shuqin, Ms. Yi Lixia and Ms. Hu Guangfeng, from the Shuangluan District, were also arrested. Their homes were ransacked. Ms. Heng and Ms. Yi were released on bail after they failed the physical exam.

Mr. Liu Haiqiang from Dongzhangkou Village, Tianjiazhuang Township, was arrested by officers from the Xinji City police and the Tianjiazhuang Police Station on the afternoon of September 6, 2019.

The officers took Mr. Liu to his home and photographed his front door. Mr. Liu is being held in the Xinji City Domestic Security Division. His family has not been allowed to visit him.

Officers from the Zhenping County Domestic Security Division ransacked Mr. Yao Fuyu’s home and confiscated Falun Dafa books and some cash in the early hours of August 31, 2019. Mr. Yao, his wife, and their daughter were arrested.

Mr. Yao's wife was later released. Mr. Yao and his daughter were taken to the Shangzhuang Detention Center in Nanyang City.

Ms. Cao Yanmei from Xugu Town in the Xinzhou District was arrested on August 9, 2019.

Ms. Zhang Lihua was arrested in 2017 for talking to people about Falun Gong. She was taken to the Erzhigou Detention Center. Ms. Zhang became displaced after being released. She has not been heard from her since August 26, 2019.

Ms. Zhang Guozhen, Ms. Zhang Fenglan, and another practitioner from the Wujiashan area in the Dongxihu District went to visit a practitioner on September 5, 2019, who had just come out of hospital. They were arrested by officers from the Wujiashan Street Police Station, and taken to the Wuhan City No. 1 Detention Center for ten days on September 6.

Ms. Liang Shengmei was arrested by Dalian Domestic Security officers on July 10, 2019, and was later officially arrested. Her case has been turned over to the Dalian City Procuratorate.

Ms. Gao Liyuan and elderly Ms. He from Beisijiazi Township were reported to the authorities for distributing information about Falun Gong on September 5, 2019. They were arrested by officers from the Beisijiazi Police Station. Ms. Gao’s home was ransacked, but didn't find anything incriminating.

Ms. He was released later that evening. Ms. Gao was taken to the Shenyang City Detention Center for seven days.

Ms. Cai Shuxia, Ms. Lu Qinglan, and Ms. Duan Shurong were arrested by Li Xiangjun, head of the Bayuquan District Domestic Security Division, and three other officers on September 5, 2019, for talking to people about Falun Gong at the Hongqi Farmers' Market.

The three practitioners were taken to the Yingkou City Detention Center that evening. Ms. Cai suffered severe convulsions during the physical exam, and her blood pressure was very high. Staff at the detention center refused to accept her, and she was released that evening.

Ms. Lu and Ms. Duan are still being detained.