(Minghui.org) Today's news from China includes incidents of persecution that took place in 11 cities or counties in 6 provinces, where at least 22 practitioners were recently persecuted for their belief. 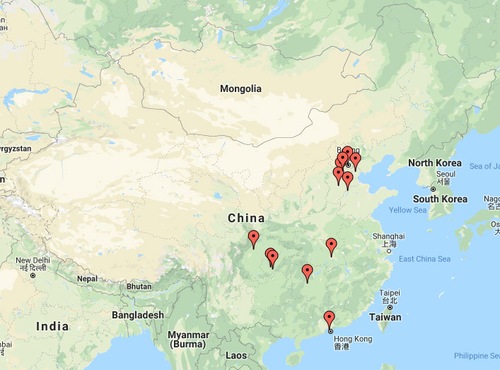 Ms. Hou was rushed to the hospital after being arrested by Lisui Police Station officers. Her whereabouts are unknown.

Ms. Huang was not accepted by a detention center after she failed the physical exam.

The remaining six practitioners were taken to a detention center.

Ms. Guo Tieqian from the Shengshitianxia Residential Community in the Wuqing District was arrested on September 3, 2019. Her home was ransacked. She is being held in a detention center.

Ms. Zhang Chunxia and Mr. Zhao Guojun were arrested in their homes on September 4, 2019. Mr. Zhao had a blood sample taken as soon as he arrived at the police station. His whereabouts are unknown.

Ms. Chen Lihua was reported to the authorities for talking to people about Falun Gong. She was arrested, and is being held in the Qingyuan Detention Center.

Tian Jun, mayor of Xinji City, saw a couplet with the words “Falun Dafa is good” on the door of Mr. Liu Haiqiang’s home on July 4, 2019. He ordered officers from the Xinji Domestic Security Division and the Tianjiazhuang Township Police Station to arrest him and ransack his home.

Ms. Liu Jinying from Beiruhe Village, Hujiazhuang Township, was arrested on September 6, 2019, for talking to people about Falun Gong in Dawei Village, Dingxing County. Her home was ransacked. She was taken to the Dingxing Detention Center.

Mr. Jia Zhaode from Qihe County was arrested by officers from the Renli Town Police Station in September 2019.

Mr. Wang Xinguo, 65, from Songbu Town, Macheng City, was arrested at his son’s home in Wuhan City by the Wuhan police on the afternoon of September 5, 2019. His home was ransacked.

Mr. Guan Yibo, 49, was arrested by officers from the Gongjiao Police Station in the Futian District, when he took the subway to work on the morning of May 31, 2019.

He was taken to the Shenzhen City No. 2 Detention Center on June 1, and was officially placed under arrest on July 9 by the Nanshan Procuratorate.

Mr. Tang Bin from the Guojiatuo Neighborhood in the Jiangbei District was arrested in February 2019. He was sentenced to a two-and-a-half-year prison term at the end of August. He is being held in the Beibei District.

Ms. Tang Suzhen was arrested in August 2018 and was sentenced to a three-and-a-half-year prison term. She is being held in the Prison Admission Section of Chongqing Women's Prison. Her family has not been allowed to visit her because she refuses to renounce her belief.

Mr. Liang Guangqing, in his 60s, was recently arrested by officers from the Fucheng District Domestic Security Division. He is being held in the Mianyang City Detention Center.

“Heilongjiang Woman Arrested for Her Faith, Husband Given Run-around While Seeking Her Release”