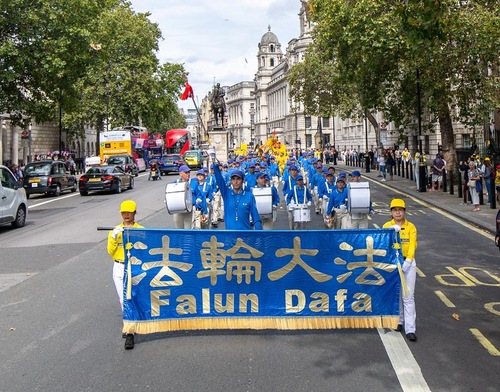 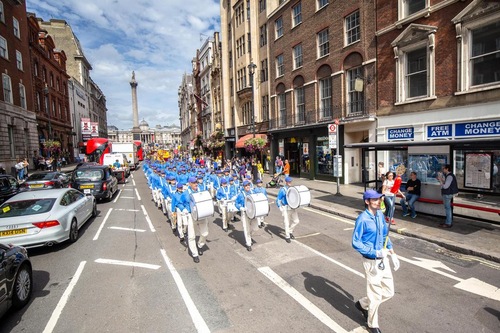 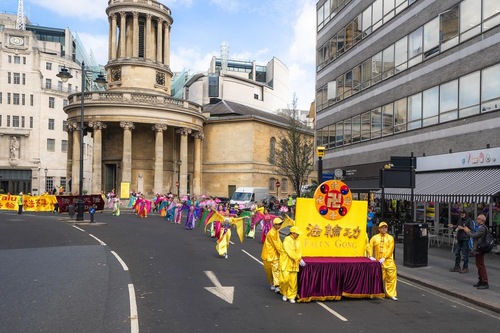 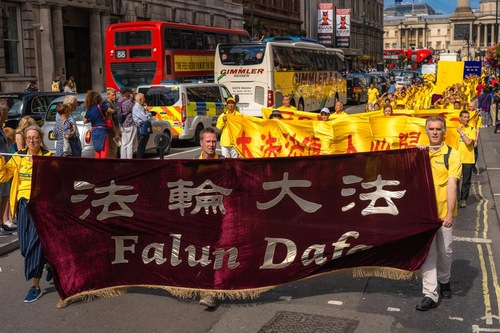 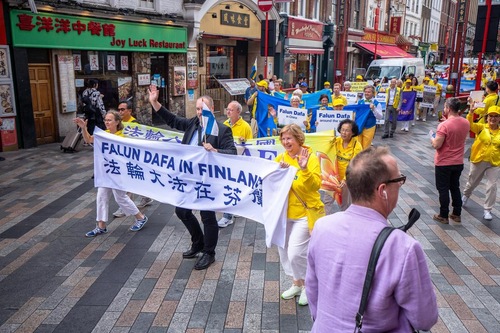 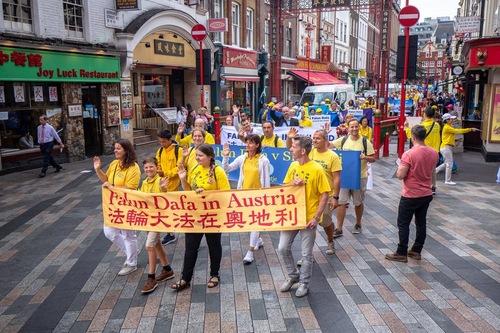 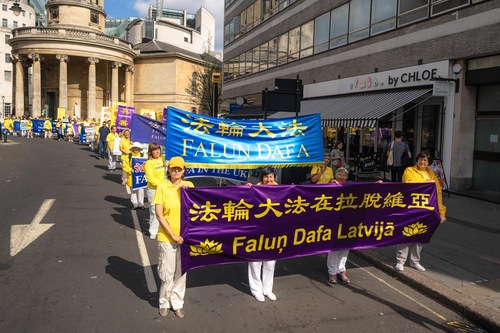 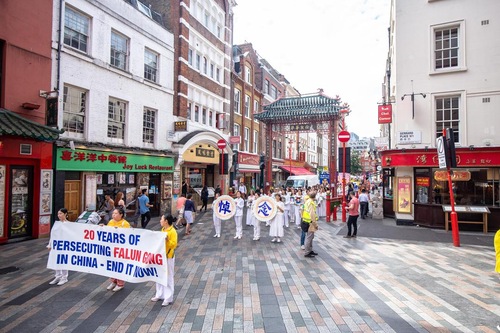 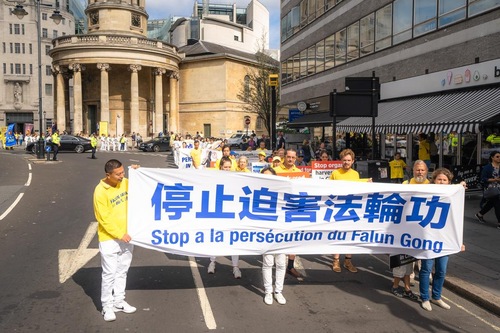 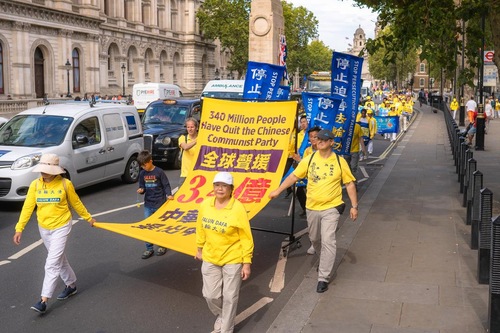 The European Tian Guo Marching Band was at the head of the procession. 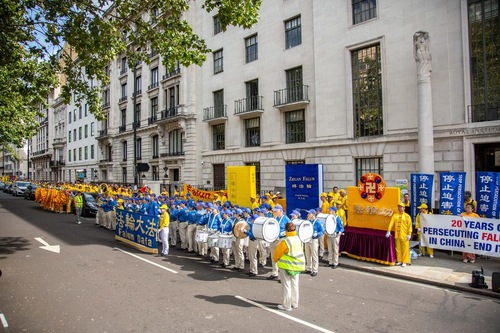 The assembly point in front of the Chinese Embassy 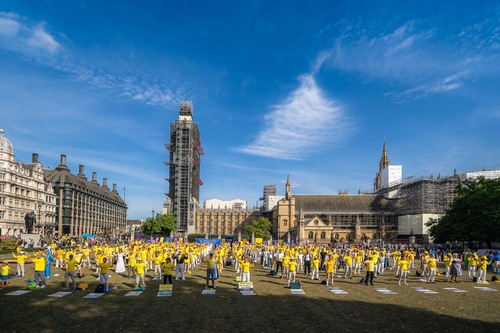 Group practice in front of the UK Parliament

The starting point of the parade was The Regent’s Park, London. The parade continued on to Oxford Street, a well-known business area. Next came Chinatown, Trafalgar Square, Whitehall, the British Prime Minister's Office, with the final destination the UK Parliament Buildings. The parade lasted for more than two hours.

Many people, including locals and tourists, watched the procession and took photos and videos. A number of Chinese spectators quit their membership in the CCP and its youth organizations after talking to practitioners and understanding the importance of disassociating from these organizations. Many spectators took Falun Gong fliers in order to learn more about the practice.

Practitioner Lin Zhang, one of the organizers of the event, introduced the goal of the parade: To introduce Falun Gong to the public, protest the CCP’s 20-year-long persecution, and call on people from all circles to work together to end the persecution.

Zhang said, “Falun Gong practitioners have been arrested, beaten, and the CCP has even harvested organs from living practitioners in China for 20 years. Practitioners are kind people who follow the principles of Truthfulness, Compassion, and Forbearance. We hope that more people can learn the truth, and condemn the CCP’s violence.”

Bystander Tian, a London resident originally from Shenyang, China, sat on the roadside in Chinatown to watch the parade. He said that he had seen Falun Gong activities many times and commented about the CCP’s organ harvesting from living practitioners, “It is inhuman.” Tian thinks that Falun Gong's principles of Truthfulness, Compassion, Forbearance are important, adding that the more people who embody these principles, the better.

Truthfulness-Compassion-Forbearance Is a Universal Value

Joyce, a hotel manager who has lived in the UK for many years, is originally from Singapore. She said, “It is sad to hear that such a brutal persecution occurs anywhere in the world. Truthfulness-Compassion-Forbearance is a universal value. Both Buddha and Jesus taught people such principles. This principle is of great value and cannot be given up. This is life.” 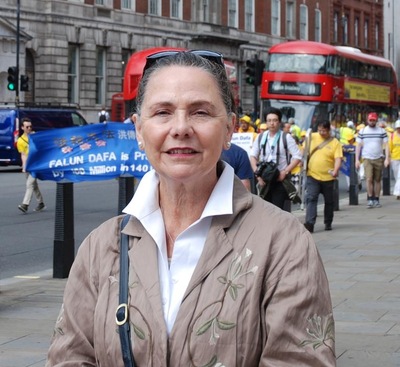 Winifred Terloy, visiting from the US, said that she wants to be involved in ending the persecution. Winifred was impressed with the parade that was “so peaceful, international, and unique.”

Her voice trembling with emotion, she continued “In our city, I saw a human body exhibition and even saw human organs. I am very worried. How can such a thing happen? People can’t be treated like animals, which is a very sad thing. We were once scared by the Nazis. And now, even living people are killed for their organs, which is extremely evil. We must fight it, or the evil will continue.”

Winifred said, while pointing to the practitioners dressed in white carrying wreaths and portraits of their fellow practitioners who lost their lives in the persecution, “Look, these people are those who have been persecuted to death.”

When told that European politicians were openly standing up against the persecution, she said, “That is great. I feel better knowing this.”

Andrea, an economics analyst from Scotland, said, “We know that some of the oppression in China is perpetrated with high technology equipment, specifically developed for the CCP. We are more sympathetic to the Falun Gong practitioners in China. This kind of oppression of freedom of speech and freedom of belief in any place has made us very sad.

“The Chinese government uses advanced technology to fight against the free society and dissidents. The CCP is at the forefront in this regard. This is what the communist party does.

“We will spread the news about the persecution of Falun Gong to others, of course, in a safe manner. I believe that we can learn a lot from Falun Gong practitioners about faith, true goodness, and rational tolerance.

“The principles of Truthfulness, Compassion and Forbearance are great. I think that everyone really wants to be such a person. People like this are only persecuted in China.” 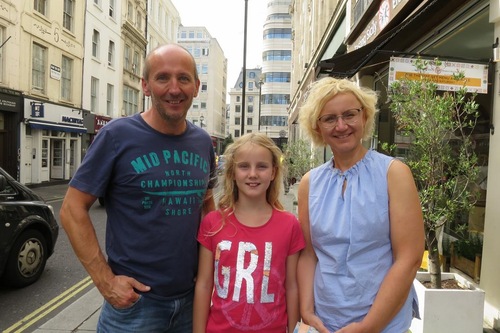 The Kühn family enjoys the parade.

The Kühn family from Bavaria, Germany, were visiting London. This was their first time to see a Falun Gong parade. The husband said that the parade looked “very friendly and peaceful.” The wife also agreed. Mr. Kühn also noticed that the parade had different themes, which made it very interesting. He was appalled to learn about the CCP’s organ harvesting from living practitioners.

Peter Yan, a well-dressed management consultant, watched the parade. He said that he didn't know what it was all about until he read the flier. He remarked, “The event is very peaceful, which is the best part of the parade. The activities are colorful. People are friendly, not aggressive, which is very good.”

Upon learning that the CCP has been persecuting Falun Gong practitioners for over 20 years, Peter said, “I don't like communism. I don’t think it can work like an institution or a government with a certain political style. No matter where communism is, I don’t like communism as a political system.”

He continued, “I noticed that these Falun Gong practitioners are very good people. Obviously the CCP's propaganda are all lies. The concept of Truthfulness, Compassion, Forbearance is very good. I will tell my friends about my personal experience today. It is not only because of a sense of justice, but indeed because of the demeanor of the practitioners.”

Falun Gong was first brought to the public in 1992. Nearly 100 million people across China were soon practicing Falun Gong after experiencing improvements in their health and character. Jiang Zemin, former head of the communist regime, perceived the spiritual discipline's growing popularity as a threat to the Chinese Communist Party's (CCP) atheistic ideology and issued an order to ban Falun Gong on July 20, 1999.

Minghui.org has confirmed the deaths of 4,236 Falun Gong practitioners during the 20-year-long persecution, though the actual number is suspected to be much higher. Many more have been imprisoned and tortured for their faith.

“Greetings to the Dafa Disciples Attending the Fa Conference of Europe”