(Minghui.org) U.S. Senator Mr. Patrick Leahy of Vermont issued a statement on September 12 calling on the Chinese government to end its persecution of Falun Gong. His statement has been included in the congressional record. 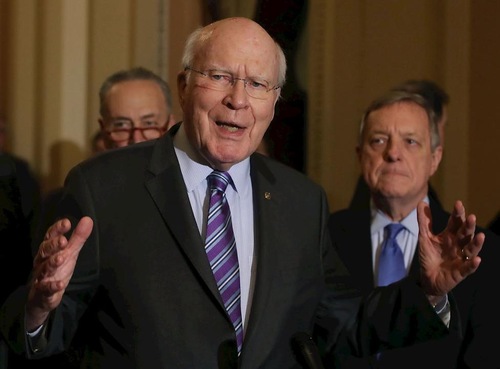 Vermont Senator Mr. Leahy calls on the Chinese government to end its persecution of Falun.

Senator Leahy said in his statement that Falun Gong is a traditional form of belief in China. Its adherents practice meditation and use Truthfulness, Compassion, Forbearance as guiding principles.

The Senator wrote: “Falun Gong practitioners recently marked the 20th anniversary of the beginning of China’s campaign of brutality against their community. On July 20, 1999, hundreds of Falun Gong practitioners were arrested in their homes in the middle of the night. Over the following week, as many as 50,000 Falun Gong were reportedly detained. In the years since that initial crackdown, the Chinese government has relentlessly continued its repression of Falun Gong.”

Mr. Leahy drew attention to the brutality of the persecution: “Falun Gong practitioners have been arrested, interred at reeducation camps, beaten, sleep-deprived, starved, sexually assaulted, electrocuted, force-fed, shackled, and had their limbs slowly broken, until they have renounced their beliefs and practices. They have had their organs harvested against their will. They have been murdered.

“We will probably never know how many innocent people have been the victims of these atrocities, since the Chinese government denies to the outside world that it is happening, while justifying it to their own citizens.”

The Senator called for China to bring the persecution to an end. “The Chinese government should immediately cease its arbitrary detention and brutalization of Falun Gong practitioners and other religious and ethnic minorities.

“It should release political prisoners from reeducation centers, decriminalize religious and spiritual practices, and allow international human rights groups and journalists to interview survivors. It should commit to ending the use of torture, organ harvesting of prisoners, and propaganda against minorities.”

The Senator commended Falun Gong practitioners from Vermont for raising awareness about the persecution happening in China. He said, “The plight of these people in China, the horrors of torture and murder by the government, can seem very far away from Washington, D.C., and very far away from my state of Vermont. And yet Vermonters travel to Washington to meet with me and my staff, urging Congress to take action on behalf of Falun Gong.

“Vermonters are persistent people who rightly refuse to let us forget about Falun Gong and the other victims of China’s repression. It is all too easy to ignore crimes against humanity on the other side of the globe, when the victims are people we will never meet. But Vermonters demand that we pay attention. The Falun Gong deserve to be remembered, and they deserve the international community’s collective action.”

Senator Leahy is a Democratic Party member and United States Senator from the State of Vermont. He has held office for 44 years, and was formerly chairman of the Senate Judiciary Committee, as well as President Pro Tempore of the U.S. Senate.

“The Wonder of Falun Dafa: Miraculous Recoveries from Neck Cyst and Kidney Stone”